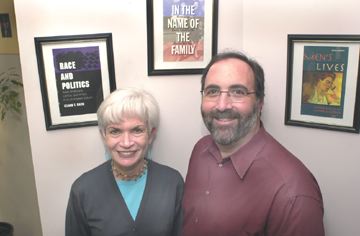 Judith Stacey and Timothy J. Biblarz argue that children with lesbian and gay parents are more likely to depart from traditional gender roles.

Children born to and raised by homosexuals tend to play, dress and behave differently than children reared in heterosexual households, a USC study on gay parenting has found.

But, researchers said, many of the differences are those that any democratic society should welcome.

In the paper, “How Does the Sexual Orientation of Parents Matter?” professors Judith Stacey and Timothy J. Biblarz argue that children with lesbian and gay parents are more likely to depart from traditional gender roles.

The researchers’ findings, published in the April edition of the American Sociological Review, were culled from an analysis of 21 studies dating back to 1980. Those past studies – which included only birth children, not adopted children – downplayed contrasts between children raised by homosexuals and heterosexuals. The USC paper focused mainly on lesbian mothers and their offspring, because fewer studies of gay fathers exist.

“We found that despite the ‘no differences’ mantra, many studies do report evidence of some intriguing differences, and even of some potential advantages of lesbian parenthood,” said Stacey, holder of the Streisand Professorship in Contemporary Gender Studies. “A difference is not necessarily a deficit.”

In addition, heterosexual mothers tend to encourage sons to participate in historically “masculine” games and activities – such as Little League – and daughters in more “feminine” pursuits – such as ballet. In contrast, lesbian mothers had no such interest – their preferences for their children’s play were gender neutral.

“Lesbian and gay parent families offer a unique opportunity to examine ways in which gender differences affect parenting practices and outcomes,” said Biblarz, an associate professor of sociology. “We believe there are some very interesting issues of gender and sexuality that shouldn’t be ignored.”

In two studies, a greater number of young adult children raised by lesbians had participated in or considered a same-sex relationship or had an attraction to the same sex. However, statistically, they were no more likely to identify themselves as lesbian, gay or bisexual.

One area the researchers found no differences in was the mental health of children or their quality of relationship with parents. Children brought up by lesbians and gay men are well-adjusted, have good levels of self-esteem and are as likely to have high educational attainments as children raised in more traditional heterosexual families.

“Levels of anxiety, depression, self-esteem and other measures of social and psychological behaviors were generally similar,” Biblarz said. “While all children probably get teased for one thing or another, children with gay parents may experience a higher degree of teasing and ridicule. It is impressive then that their psychological well-being and social adjustment does not significantly differ, on average, from that of children in comparable heterosexual-parent families. Exploring how lesbian and gay parent families help children cope with stigma could prove helpful to all kinds of families.”

Lesbian co-parents typically are highly involved in raising the children. Lesbian social mothers (partners who did not give birth to the child) take on more responsibility – changing diapers, picking up children from day care and organizing play dates – than heterosexual fathers.

Lesbian couples tend to “be in greater harmony in terms of their parenting approaches,” Stacey added.

Other high points of the study include:

o Adolescent and young adult girls raised by lesbian mothers appear to be more sexually adventurous and less chaste. Sons of lesbians display the opposite – boys are choosier in their relationships and tend to have sex at a later age than boys raised by heterosexuals.

o It is more common for both lesbian moms to be employed, to earn similar incomes and to cut back on their hours of paid work in order to nurture young children. Some research indicates that egalitarian parenting contributes to child well-being, Stacey said.

o Same-sex couples proved better at managing disagreements and anger than did comparable heterosexual married couples. Research suggests that parental conflict may be one of the most significant sources of difficulty for children, Stacey said.

“Studying how the numbers, genders and sexualities of parents interact to influence children could give us valuable information relevant to central questions in family theory,” said Biblarz. “Researchers have been reluctant to investigate differences among children for fear that such evidence will be used to discriminate against gay families.”