During recess, Sally pushed you. Your teacher gave you a frowny face on the spelling test, and you must write “incredible” 100 times on the blackboard.

On top of all that, your front tooth is loose.

“OK, everyone, take three deep breaths,” said USC staff member Tina Koneazny, sitting straight-backed and cross-legged. A group of children with looks of concentration mirrored her movements as they stretched out on yoga mats. All eyes closed, one boy placed his hand over his heart as if reciting the Pledge of Allegiance.

“Breathe in and out,” Koneazny said, her own chest rising and falling. “Try to hear your own breath. Deep breath in. Out. Last one, deep breath in.”

A long, collective whoooosh of air. “Great job,” she said.

For these students and those at five additional elementary schools near USC, childhood stressors are being soothed with yoga.

Little Yoginis is the brainchild of Koneazny, associate director of administration and educational outreach at the Joint Educational Project (JEP), housed in the USC Dornsife College of Letters, Arts and Sciences. The program is part of JEP’s USC ReadersPlus.

Each week, Koneazny and ReadersPlus tutors visit elementary schools, read children a book and practice yoga, imbuing the themes in the literature. For example, during one session, they read aloud Horton Hatches the Egg by Dr. Seuss, emphasizing Horton the elephant’s faithfulness and determination to protect an egg nuzzled in a nest perched in a tree. 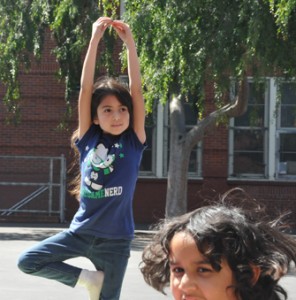 In this case, the yoga practice began with a breathing technique called “Elephant Breath” — deep cleansing breaths as hands are clasped and arms are swung back and forth like an elephant’s trunk. After warming up with a number of sun salutations, the children followed with a “tree” pose in honor of Horton’s many months crouched in a tree.

“The themes in each book are selected as they align with the guiding principles of yoga,” Koneazny said. “These are values that provide a moral compass for all human beings to become their best selves. Themes like nonharming, honoring one another, respect for one another, mindfulness, thoughtfulness, kindness. For example, one lesson is built around the theme of harmony and nonviolence. For this lesson, we’ll be practicing tapas — the yoga practice of discipline and determination.”

On this recent day, under the sun’s warmth at Vermont Avenue Elementary School, one of the USC Family of Schools, Koneazny held up a book while the children, mostly third-graders, scooted in to hear over the laughter and occasional shriek from the playground.

“This book is called One,” Koneazny told the children, opening the book. “Ready?”

Blue is a quiet color. Blue enjoyed looking at the sky floating on the waves. Overall, he liked being Blue, except when he was with Red. Red was a hothead; he liked to pick on Blue. ‘Red is hot, Blue is not!’ Red would tease Blue.

“Red is evil!” hollered a boy from the group.

In the book, characters named Orange, Green and Purple don’t like what they see, but they don’t speak up. Things escalate — until One comes along and shows all the colors how to stand up and stand together. The students learned about numbers, counting and primary and secondary colors but also about embracing differences and how it can just take one voice to make a difference.

After reading the book aloud, Koneazny asked the children: “Remember when One arrived in the book and saw that Red was being a bully? Did One shy away or did he stand up to Red?”

“Stand up!” the children chanted.

“He stood up like an arrow, right?” Koneazny continued. “So now we’re going to do an arrow pose.”

Koneazny and ReadersPlus tutors meandered through the group, helping students get into the pose properly, adjusting them as needed.

“Was mine nice?” a girl asked.

After yoga practice, children talked about the beauty of the discipline that originated in ancient India.

“Yoga is like being on a nice, fluffy cloud,” said 8-year-old Paola Ruiz. “It’s very relaxing. It keeps you healthy. It’s good for your bones because it’s almost like exercise.”

Ruiz went on to explain that yoga gives her energy.

“It’s good for your heart. Because when you’re breathing, it keeps your blood flowing,” she said.

Amani Tann, 8, said yoga is healthy because it keeps her more balanced and focused.

“You have to concentrate on one thing and that keeps you focused,” she said. “Instead of looking around, you focus on one thing.”

“You’re paying attention, calming down and don’t get mad,” Zarate said. “It takes patience and balance. It makes me healthy in my spirit.” 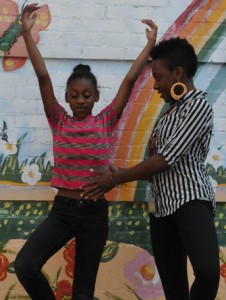 Annelisha Dixon, one of the ReadersPlus tutors assisting children that day, works with children one-on-one during the school day, helping them with reading, and participates in the afterschool yoga program at Vermont.

“Yoga is really good to help children reflect on what they’re doing and how they’re behaving,” said Dixon, who takes courses at the USC School of Dramatic Arts and minors in Spanish at USC Dornsife.

“Yoga helps them gather their thoughts, which can be hard for children. It focuses them. Reminds them where they are and what they should be doing. So when it’s homework time, they’re a lot more respectful to each other and themselves.”

“They love it,” Cortez said. “I’m just excited that USC can bring this to my children. JEP exposes our students to so many new things.

“Having the children relax and breathe, especially when we’re approaching [California Standards Test] time, is important,” she explained. “Children get anxious. It’s a big test. With this program, they get oxygen into their little bodies and learn to breathe.”

Yoga for young ones