For the third consecutive year, tens of thousands of book lovers from across Southern California gathered on the University Park Campus for the 18th annual Los Angeles Times Festival of Books, a free, two-day event held April 20-21.

“We are very grateful that you have made this the largest, most prestigious public literary festival in the nation,” said USC President C. L. Max Nikias in his opening remarks to the crowd gathered in front of the USC Stage in Hahn Plaza.

“I believe there is no better place to hold an event that ignites the imagination and inspires scholarly activity than a world-class university like USC,” he continued, after noting that this year’s festival featured numerous live-music performances and film screenings, in addition to a host of literary discussions and events.

The event drew many big names in the literary world, including Margaret Atwood, who spoke to a full house at Bovard Auditorium on Saturday afternoon. In her conversation with Michael Silverblatt, host of KCRW’s Bookworm, Atwood, winner of the Times’ 2012 Innovator’s Award, spoke about the future of publishing and the enduring presence of storytellers in society.

“There will always be storytellers because we are a narrative being,” she said.

Atwood remained positive about the future of publishing in the face of technology, particularly when asked about how younger generations flock to e-readers, cellphones and their computers to read, rather than relying on traditional paper books.

“[The Internet] has been a great driver to literacy and information flow,” she said.

Joyce Carol Oates, Anna Quindlen and Carol Burnett were among the other literary heavyweights who spoke at Bovard. And in other buildings around campus, smaller panel discussions were held.

At the USC panels held in Hoffman Hall, for instance, multiple USC faculty members spoke about their latest works.

In Saturday’s hour-long panel titled “Why Did the Writer Cross the Genre,” Dinah Lenney, assistant professor of writing at the USC Dornsife College of Letters, Arts and Sciences, moderated a conversation with fellow writing instructors Bernard Cooper and Sandra Tsing Loh, and Luis Alfaro, assistant professor at the USC School of Dramatic Arts, about their experiences in writing across genres, including plays, memoirs, essays and novels.

Alfaro, a noted playwright and a MacArthur fellow, admitted that, despite also writing prolifically as a poet, journalist and novelist, “It always comes back to theater.”

Other USC faculty who spoke in the Hoffman Hall panels included USC Dornsife’s Daniela Bleichmar, Robert Scheer of the USC Annenberg School for Communication and Journalism, and Mel Baron of the USC School of Pharmacy.

Eight different stages were also set up around campus, including the Target Children’s Stage at McCarthy Quad, which included performances by singer-songwriter Lisa Loeb, writers Jon Klassen and Lemony Snicket, and Roald Dahl’s daughter, screenwriter Lucy Dahl. The Cooking Stage on Cromwell Field featured a cooking demonstration by Olympic ice-skating champion and chef Brian Boitano and an interview with actress Valerie Bertinelli, among other appearances by notable chefs and authors. The Poetry Stage featured readings by the likes of Susan Terris and Kurt Brown, as well as USC’s Dana Gioia, David St. John and Carol Muske-Dukes.

With temperatures reaching into the 80s, festival-goers wandered the campus, exploring the food trucks parked outside Cromwell Field and the numerous booths lining Trousdale Parkway and Childs Way, in addition to filling Alumni Park, Founders Park and Argue Plaza. There, authors shared their latest books, businesses and organizations advertised their services, and local bookstores attracted crowds eager to browse the shelves of books being sold.

Children and their parents gathered for arts and crafts activities at the USC Civic Engagement tent, while in one corner, writers such as Lisa Yee and Laurie Ochoa read from their books to a rapt audience of young readers. 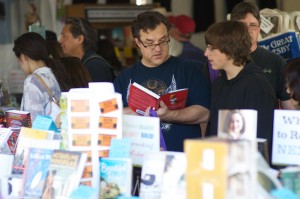 Book lovers of all stripes comb the University Park Campus to meet with authors and browse the shelves to score literary finds. (USC Photo/Dietmar Quistorf)

“We’ve seen a lot of parents coming in here to play with their kids,” said Sean Taitt, a program manager with the USC Kinder to College program, who volunteered at the tent on Saturday. “That’s part of the USC Civic Engagement initiative’s mission: ensuring kids and parents spend quality time together, and instilling the importance of reading and writing.”

The tent saw heavy traffic throughout the day. “It just calmed down a few minutes ago,” said another volunteer, Claudia Zaldivar, who is involved with USC’s Neighborhood Academic Initiative.

Nearby, lines formed around the Ostrow School of Dentistry of USC’s booth, where visitors were able to receive free dental screenings.

“It’s been incredibly busy — even with the heat,” said Idalia Munoz, administrative director of perioperative services for Keck Hospital of USC, as she handed out small bottles of sunscreen to visitors.

Early estimates predicted the event would attract upwards of 150,000 people, many of whom traveled to the event via bus and the new Metro Expo Line.

Rizza Gonzales, a lawyer who lives in Culver City, Calif., was among those packed on the Metro early Saturday morning, where, she said, festival-goers chatted enthusiastically with one another, comparing notes on which panels and authors they were most eager to see.

“It was like being with a community of book lovers,” Gonzales said.

This year’s festival was a first for many, including 5-year-old Sofia Santos, who came with her mother, Maria.

The younger Santos, wearing a crown she decorated at a booth in Argue Plaza, said her favorite part of the festival was seeing Scooby Doo. She went home with a 46-piece puzzle of her beloved cartoon character and a bag full of books.

For Jamie Mondal, who came to USC’s campus with her husband and her 6-year-old son, Ari, the best part of the festival was spending time with her family. She and Ari studied the large banner outside one of the booths on Trousdale Parkway, where attendees were encouraged to answer the question, “What are you reading?”

Blue marker in hand, Ari searched for a blank space to add the name of the book he had just finished reading: The Dream Stealer by Sid Fleischman.

“We read together for two hours every night,” Jamie Mondal said. “He just loves reading.”

See the social media coverage of the Festival of Books

L.A. communities of color rely on police yet are stopped and arrested at higher rates

A new USC report found evidence of overpolicing along with a steady increase in 911 calls by community members to law enforcement agencies over much of the past decade.

The joint effort with the city of Los Angeles is an effort to avoid a “twindemic” amid the COVID-19 outbreak.

The arena — home to the Trojan men’s and women’s basketball and volleyball teams — will serve as a voting site from Oct. 30 through Election Day on Nov. 3.