Uproar, Moon Juice, Outrage and Who’s He? Despite their deceptively avant-garde names, these are in fact the names of medieval Indian perfumes, created and labeled almost a thousand years ago at a time when the sense of smell played a crucial role in daily life and religious ritual

During the first millennium CE in India, the complex and creative use of aromatics was considered vitally important in enhancing pleasure to achieve an ideal love life. Members of the royal courts, temples and monasteries were honored with costly and exotic perfumes, pastes and garlands in well-defined ritual practices believed to encourage an auspicious ambience for the granting of political and divine favor.

“Given the diverse nature of smells and their powerful affective potencies, it is only natural that people sought to exploit them to please gods, placate kings and arouse lovers,” explained James McHugh of the USC Dornsife College of Letters, Arts and Sciences, and author of Sandalwood and Carrion: Smell in Indian Religion and Culture (Oxford University Press, 2012).

McHugh’s highly entertaining study is the first to offer a comprehensive examination of the importance of the concepts and practices related to the material world of perfumes and aromatic raw materials in India during this period.

The assistant professor religion at USC Dornsife wrote about the important role perfumes played in every aspect of Indian life as well as the abstract and philosophical notions of smell portrayed in various literary texts of the epoch.

McHugh wrote his book while at USC with the help of a Society for the Humanities Fellowship on “global aesthetics” awarded by Cornell University. A research grant from USC also allowed him to travel to India to speak to perfumers and gain access to rare Sanskrit manuscripts. 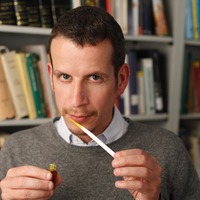 Drawing on a wide range of Sanskrit texts — as well as works by scholars of religion, history, material culture, anthropology and art history — McHugh offers a comparative study of the Hindu, Buddhist and Jain religious traditions with respect to smell. He illustrated his discourse on the uses and meanings of smells and perfumes in South Asia with excerpts from Sanskrit texts. One of the book’s most notable excerpts includes a literary tale of a perfume-addicted, lovesick prince.

“Indian literary texts are filled with elaborate references to aromatics, perfumes, flowers and even stinks, much more so than in a typical contemporary English-language novel,” McHugh said. “There is a rich smellscape of spring mango blossom, cool lotus breezes, fragrant damp earth, milk, honey and smoking sacrifices.

“The odors of cows and goats are other prominent olfactory benchmarks in technical texts,” McHugh added, “as are the stinks of fish, raw meat and foul corpses.”

Though they certainly never used such smells in perfumes, medieval Indians were comfortable with the pungency of their natural environment. Medieval Indians also preferred high levels of aromatics, in sharp contrast with today’s Western society, which as McHugh observed, is often far more concerned with masking or removing odor than creating it.

As a result, he noted, our modern aseptic world “smells rather dull for the most part: Produce is sold chilled and wrapped; feces and urine are whisked away into sealed sewers; people generally deodorize their bodies and wear little if any fragrance; and our quest for longer blooming cycles means that on Valentine’s Day, most store-bought roses have no scent.”

Ironically, our modern obsession with odor removal creates its own catalog of “invisible” scents, which we all routinely wear. Some examples of these scents include deodorant, toothpaste and laundry detergent.

McHugh added that the scents are “such ubiquitous odors that we have psychologically classified them as clean or neutral, and [we] think they aren’t there.”

The way the sense of smell is approached in Western literary works is also very different from how it is portrayed in pre-modern Indian texts.

For the past 200 years, smell in Western society has been intricately linked with the evocation of memory, providing a pathway back to a former self, removed in time — though not necessarily in space — from the present.

This concept is virtually unheard of in medieval Indian texts, where smell’s purpose was to unite the self with an odorous other (for example, a person, god or flower), who is removed in space but not in time.

However, medieval Indians did believe that foul odors could be employed to repel undesirable people or evil spirits, as in the practice of burning vulture dung during exorcisms to expel demons.

In medieval India, not only did odors have the power to attract or repulse, they were also considered to be indicators of virtue, McHugh said. Indeed, perfumes and aromatics, along with the sense of smell itself and other odors were used as tools to create order in the universe as well as material and ethical hierarchies. Thus, for medieval Indians, the good and the godly literally smelled divine, while the smell of evil stank.

Nonethless, smelling good was not always a good thing. In certain texts, McHugh discovered, a person with a persistent natural odor of fresh flowers was described as “bloomed,” a sinister metaphor suggesting imminent death.

McHugh’s interest in South Asian culture was sparked while growing up in northern England. He noted that his hometown is located in a part of the United Kingdom that plays hosts to a large community of Indian immigrants.

“I remember going to big Indian stores in Bradford as a boy and seeing all these materials and exotic spices and posters of Hindu gods and being fascinated and intrigued,” he said.

McHugh, who said he was torn between studying medicine or humanities and described himself as “a bit of a medic/botanist manqué,” studied philosophy at the University of Cambridge before pursuing a master’s degree in Indian Religions at the University of Oxford and then earning a PhD from Harvard University for his research into the history of smell and perfume in pre-modern India. In 2008, he joined USC Dornsife, where he currently teaches an introduction to Indian religions and a popular general education course titled “Sense and Sensuality in Indian Religious Literature. 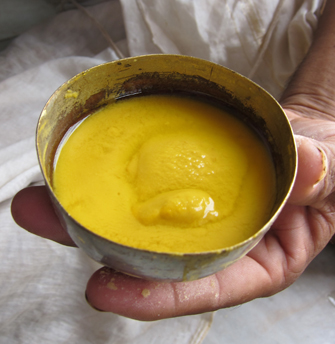 In contrast to invisible modern perfumes, aromatic pastes, made from exotic materials like this fragrant sandalwood paste, were highly valued for their color and decorative value.

His original love of pharmaceuticals and plants led him to concentrate on those aspects in Indian culture and literature. Realizing there was an unexplored gap in historical, cultural and philosophical knowledge about the subject, McHugh decided to focus on synthesizing the theory and practice of perfumes and smell in religion, medicine and daily life in pre-modern India.

“During the Medieval period, India was the hub of the aromatic world,” McHugh said. Not only did the country produce many key ingredients, including sandalwood, saffron and cardamom, it was also at the crossroads of the trade in rare and exotic aromatics. These aromatics were used to make costly perfumes, with cloves, nutmeg and camphor coming from Southeast Asia, frankincense and myrrh from the Persian Gulf and musk from the Silk Route to the north.

“The elite demand for these rare materials led to their high exchange value,” McHugh said. “Both the high economic value and the aura of their exotic origins contributed to the manner in which the significance of perfumes was constructed; a certain golden, fragrant paste might not only be understood as a powerful cause of pleasure and arousal, it was also a marker of cosmopolitan values, wealth and cultivation.”

In fact, in pre-modern India, knowledge of aromatics was essential in order to be ranked among the cultivated. This is similar to the way it is considered important in the upper echelons of modern Western society to be something of a wine connoisseur.

“Educated people appear to have been far more interested in and articulate about smells than we are,” McHugh said. “Anyone who was anyone in pre-modern India had to have a fairly sophisticated knowledge about the art of perfumery and how to combine scents in a pleasing and correct manner that took into account the season and the occasion.”

McHugh’s book cites what is considered the earliest major text on perfumery during this period, contained in Varahamihira’s The Great Compendium or Brhatsamhita. In it, ingredients for perfume formulae are described as placed in a grid from which numerous combinations can be derived, with the possibility of creating a vast number of different scents. Varahamihira also provided an algorithm to calculate how many perfumes can be made from a set number of ingredients — up to 43,680 in one case.

“I wonder to what extent these mathematical exercises in perfumery may have been a source of intellectual delight for the educated connoisseur of perfume,” McHugh reflected in his study, noting that later perfumery texts also included sophisticated word puzzles. Some perfume formulae took the form of clever riddles peppered with often risqué puns.

“I suggest that pleasures of perfume were not entirely olfactory,” McHugh concluded, “but also included the clever delights of combinatorics and word games.

“It seems more than likely that manipulating the clever features of these formulae also constituted a pastime for the highly educated.”

USC Gould’s Center for Transnational Law and Business has launched an international study group to track trends and developments in the Americas.

The accomplished USC duo will learn about Chinese culture and study with top professors as part of a one-year master’s program in global affairs.

The program, part of the Association of Pacific Rim Universities, is rooted in collaboration, communication and education.