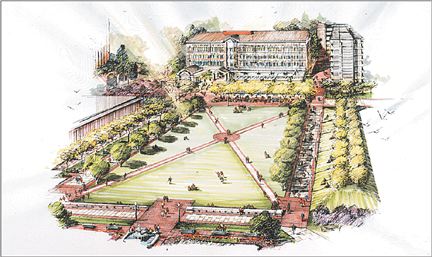 Work has started on a $4.2 million project to remove a section of Hoover Boulevard south of Leavey Library and replace it with a 2.2-acre green space, reflecting pool, walkways and landscaping.

The project, officially known as the Hoover Corridor Development Phase 2, has been approved in concept since 1989. The short stretch of Hoover Boulevard that nearly bisects the eastern corner of campus has long been regarded as an inefficient remnant of the off-campus street grid.

Construction started May 15, just days after USC’s commencement ceremony. The general area will reopen by the start of the fall 2001 semester, said Jon Soffa, executive director of planning, design and construction management. A reflecting pool next to the Leavey Library patio will be finished in October.

The project affects four acres known as the “Library Quad” for its location between Leavey and Doheny Memorial libraries.

The centerpiece will be a large, grassy quadrangle that will accommodate satellite graduation ceremonies, receptions and other large outdoor events, as well as informal, everyday use by students and others. It will be bordered to the east and west by tree-lined walkways. The basketball and volleyball courts that were located west of Parking Structure X will be moved to the east side of the structure.

Soffa noted that a project of this scale is bound to have a major impact on campus operations in the area. Before the start of construction, Facilities Management Services met with an array of campus stakeholders to gain their input and coordination during construction.