The human body has the ability to ward off viruses by activating a naturally occurring protein at the cellular level, setting off a chain reaction that disrupts the levels of cholesterol required in cell membranes to enable viruses to enter cells.

Discovered by researchers in molecular microbiology and immunology at the Keck School of Medicine of USC, the findings hold promise for the development of therapies to fight a variety of viral infections.

“Previous studies have shown that our bodies are already equipped to block viruses, such as Ebola, influenza, West Nile and SARS,” said Distinguished Professor Jae Jung, principal investigator and chair of the Department of Molecular Microbiology and Immunology at the Keck School. The study was published in Cell Host & Microbe on April 17.

“We showed how this occurs,” Jung continued. “When a virus tries to enter, the immune system gets stimulated by interferon, which produces almost 300 host proteins, including IFITM3. This protein then disrupts the interaction between two other proteins, which, in turn, significantly increases the level of cholesterol in cells and thereby blocks the virus.”

Jung added that the increase in cholesterol is only within the endosome compartment of cells and has no impact on or effect from the level of cholesterol in the bloodstream.

Scientists long have known that interferon, a protein released by the body’s cells and named after its ability to “interfere” with viral replication, can inhibit the spread of viruses, but the researchers didn’t understand how.

Keck School investigators found that interferon-inducible transmembrane protein 3 (IFITM3) can disrupt the interaction between Vesicle-membrane-associated protein and oxysterol-binding protein that regulates the transport and stability of cholesterol, which are required for many viruses to take hold.

One of the main goals of his lab, Jung said, is to understand how the immune system recognizes viruses and blocks entry. In previous research, he and his colleagues have shown that a specific immune protein recognizes genetic information of the virus and then sets off an alarm signal in the host immune system.

Jung explained that in the most recent investigation, the rise in cholesterol was found to occur in the endosome compartment within the cell membrane.

“The membrane is usually very flexible,” he said. “With an increase in cholesterol, it becomes rigid and doesn’t allow viruses to pass through the endosome compartment into cytosol, the fluid portion inside cells. We were surprised to find that changing the balance of cholesterol concentration affects viral entry.”

The next step, he said, “will be to identify a therapeutic molecule that activates the expression and function of the IFITM3 protein, which potentially can be used to create an antiviral therapy. It could target the endosome compartment in order to control, combat or prevent the spread of viral infection.” 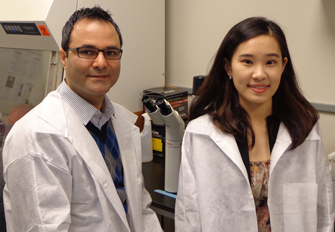 Joining Jung in the study were Samad Amini-Bavil-Olyaee, Keck School postdoctoral research associate and first author of the paper, as well as Youn Jung Choi, Keck School graduate student and second author, and researchers from the University of California, Riverside, and Scripps Research Institute.