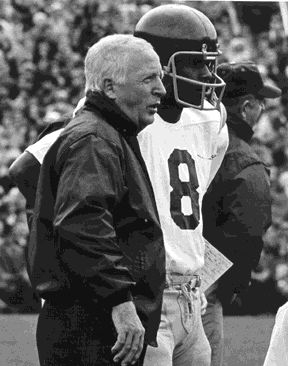 TAMPA, Fla. (AP) — John McKay, who led Southern California to four national championships before moving to the NFL as the first coach of the Tampa Bay Buccaneers, died Sunday. He was 77.

McKay, who had been in the intensive care unit at St. Joseph’s Hospital since last month, died of kidney failure due to complications from diabetes, said Bucs spokesman Reggie Roberts.

McKay, who would have turned 78 on July 5, was by far the most colorful coach in Bucs history. In addition to a reputation for being innovative and having an eye for talent, he was well known for spicing up news conferences with quips and biting humor.

Once asked about the pressure of coaching at USC, McKay responded: “I’ll never be hung in effigy. Before every season I send my men out to buy up all the rope in Los Angeles.”

Following one of his many losses during Tampa Bay’s formulative years, he delivered one of his most memorable one-liners when a reporter inquired about his team’s execution.

The Bucs lost their first 26 games under McKay, an NFL record, before rebounding to become the first expansion team to make it to a conference title game within it first four seasons in 1979.

In all, Tampa Bay made three playoff appearances and McKay compiled a 44-88-1 record before retiring after his ninth season in 1984. He remained the winningest coach in team history until Tony Dungy — the only Bucs coach with a winning record — surpassed him last season.

“Coach had a lot of confidence in his ability and the system that he believed in,” said Hall of Famer Lee Roy Selmon, McKay’s first-ever draft pick.

“He endured some criticism, especially in the early years. I really respected him and admired him during those times, because he stuck to what he believed in. Over the course of time, not only did it work for the Tampa Bay Buccaneers, but I also saw several other teams adopting some of the philosophies … many critics said would not work.”

The Bucs lost 9-0 to the Los Angeles Rams in the 1979 NFC championship game and the team didn’t win another postseason game until the Dungy-led Bucs beat Detroit in a first-round game in 1997. Tampa Bay got back to the conference final under Dungy in 1999, but lost 11-6 to the St. Louis Rams.

“I’m forever indebted to him for what he instilled in me,” said USC athletic director Mike Garrett, a Heisman Trophy-winning tailback for the Trojans under McKay.

“To this day, my whole thinking process involves some of the things I learned from him. He lives with me daily. … I became more resolute in my thinking because of John McKay. He was not an equivocal man. You could not be an equivocal person playing for him. I have a sense of direction and an absolute confidence now, and that’s what I got from him.”

A native of Everettville, W.Va., McKay enrolled at Purdue after serving in the Army Air Corps in World War II. He transferred to Oregon and teamed with Norm Van Brocklin to helped the Ducks go 9-1 in 1948 and earn a trip to the Cotton Bowl.

He began his coaching career as an assistant at Oregon, turning down offers to go to work for the FBI or play pro ball for the New York Yankees of the All-American Football Conference in 1950.

McKay moved to Southern California as an assistant in 1959 and became head coach when Don Clark retired a year later. The Trojans went unbeaten and won the first of their national titles under McKay in the coach’s third season.

“I was getting recruited by every school in the country and so was John (J.K.). When colleges recruited me, they would actually come to the McKays’ house … and it was very awkward for a lot of these coaches,” Haden said.

“When Fresno State or someone like that knocked on the door, he wasn’t home. But he always knew when Notre Dame was coming by, or Stanford, or Nebraska, or Alabama. For schools like that, he always answered the door.”

USC became known for outstanding tailbacks with Garrett, Simpson, Clarence Davis, Anthony Davis and Ricky Bell all flourishing in the I-formation system that McKay perfected in the 1960s.

In addition to his sons, McKay is survived by his wife of 50 years, Corky, two daughters, and 10 grandchildren. The Bucs said a private memorial service will be held at St. Lawrence Church in Tampa.

In lieu of flowers, contributions can be made to:

In memoriam: Charlotte Furth, 88, was among first U.S. scholars to enter China after communist revolution

During her 30-year career at USC Dornsife, the trailblazing historian’s achievements include a groundbreaking book on the history of Chinese women’s reproductive care.