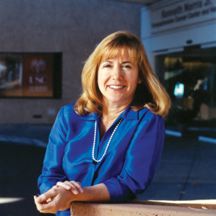 Gail Lebovic’s innovations include devices such as a special pad to cushion the breasts during mammograms, reducing pain.

When Gail Lebovic, associate professor of clinical surgery at the Keck School of Medicine, sees a problem that keeps women from getting the most out of their health care, she does more than just complain: she invents a gadget, widget or gizmo to fix it.

Though she has reached her station as a leading breast surgeon through rigorous study and training, it is the hours she spends with breast cancer patients—and the ways she has improved their lives by listening to their stories and trying to meet their needs—that distinguishes her as an innovator.

She brought not only her surgical skills, but also her creativity and imagination: She has started four new medical device companies—is working on her fifth—and already has sold one.

“I’ve got others percolating, too,” she says, “But I can’t really talk about them yet.”

On top of that, she spreads the word to women about health in an understandable, friendly way. So friendly, in fact, the Internet portal Yahoo-Health! signed Lebovic on as its breast health expert. Lebovic has authored various columns on women’s health for popular magazines and has been featured on numerous television and radio shows. She has a passion for community education. “It all starts by helping women understand what to look for,” she said.

A Los Angeles native, Lebovic decided to be a doctor by age 14. Within a few years, she earned her degree in physiology and anatomy at UC Berkeley, followed by a master of science in endocrinology. She pursued a medical degree at George Washington University School of Medicine in Washington, D.C., studying the clinical aspects of medicine while continuing her research on the relationship between hormones and the regulation of tumor growth.

In 1987, she took a fellowship at the National Cancer Institute, studying under breast cancer expert Marc Lippman, then head of the breast cancer section of the medicine branch. She learned about the molecular genetics of tumor growth, refueling her interest in breast cancer. Soon after, she joined the surgical residency program at Stanford University Hospital.

Lebovic remembers that in those days, surgeons primarily focused their efforts on removing the cancer from a woman’s body to ensure the best chance at blocking the cancer’s recurrence, she says.

While cleared of the tumors, many women were left with dramatic scars and sometimes even more disfigured self-images and emotions.

“Standard surgery skills were just not enough for these patients,” Lebovic said. So she demanded more.

The goal: Minimize scarring and the amount of tissue removed, without compromising principles for treating cancer. With plastic surgery skills, a breast surgeon could better restore a woman’s shape and leave her looking and feeling balanced, feminine and whole.

“It just reinforced the belief that you can take a tumor out effectively, using an aesthetic approach. In Europe, they use the term oncoplastic surgery,’” said Lebovic, who noted that planning ahead is key to the techniques.

Today, more surgeons strive to perform their breast cancer surgeries in a way that protects the patient’s appearance, offering breast-conserving surgery (lumpectomy), skin-sparing mastectomies and immediate reconstructions whenever possible. It makes sense, then, that USC/Norris leaders drew Lebovic away from her established Stanford-area practice to join them.

But Lebovic is not just a surgeon.

When Lebovic heard scores of women complaining about the discomfort involved in getting a mammogram, she set her mind on easing the process.

So began the Woman’s Touch MammoPad, a disposable cushion placed on the mammography equipment before a woman has the test. The MammoPad cushions the breast during compression, reducing the pain.

“This looks deceivingly simple, like a mousepad,” she says, holding up a thin, rectangular slice of foam. “But the foam is incredibly complex. The key was to develop a product that decreased pain, but didn’t affect the X-ray image.”

When the product was tested among 1,000 Swedish women, a majority of the women reported that the MammoPad cut the pain of mammography in half.

“Our hope is that by decreasing pain, we can increase compliance with mammography screenings,” Lebovic said. Today, USC/Norris and about 1,500 other mammography centers are using MammoPads, which cost about $4 each.

Lebovic also created products such as the Expand-a-Band Breast Binder, which is used to help women recovering from any invasive breast procedure.

By performing surgeries and following up with patients, she can help women one at a time. “And when you invent something that will potentially touch millions of people,” she said, “that takes patient care to a whole new level.”

USC surgeon finds compassion is the mother of invention