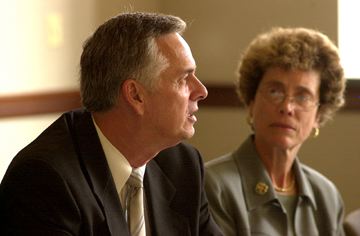 Jane Pisano, the USC senior vice president who moderated the panel discussion, listens as Los Angeles Mayor James K. Hahn commits his administration to work to foster the growth of biotechnology in the city.

Los Angeles Mayor James K. Hahn, just 20 days into his administration, chose USC as the venue and biotechnology as the topic of his first major undertaking.

The mayor assembled the movers and shakers of Los Angeles business and economic development at USC’s Popovich Hall on July 20 to get their advice on a matter he described as a major goal of his administration: stimulating the city’s economic growth and creating jobs.

The advice the mayor got centered on money, space, marketing and adequate housing. Most of the experts agreed that Los Angeles needs more of all four if it is to overcome at least the appearance that the area isn’t biotech-friendly.

In calling the meeting, Hahn was already accepting one suggestion. The Los Angeles Times solicited advice for the new mayor from Los Angeles leaders and printed scores of them June 28. One was from USC President Steven B. Sample. His advice: Make Job 1 biotech.

Hahn’s meeting, which was arranged by Jane Pisano, USC senior vice president for external relations, coincided with the release of “Heart of Gold,” a major survey of the biotechnology industry in Southern California by the Los Angeles Regional Technology Alliance. That report noted that bioscience in Southern California “has significant resources, but these resources have yet to pull together cohesively to create a leading center for bioscience development.”

Or, in the words of Alfred E. Mann, one of the area’s leading biomedical entrepreneurs and a USC trustee: “We have a good pool of talent and intellectual property here, but there needs to be some force to pull those resources together.”

The 30 assembled leaders ranged from executives in bioscience industries and economic development organizations to medical school and hospital representatives. All echoed Mann’s theme. The mayor, they agreed, can be a force to help resolve the lack of venture capital, the shortage of space for startups within the city and the perception that Los Angeles isn’t a center for industry based on high intellectual capital. And maybe, just maybe, he can help improve the ability for workers at all levels to live in good housing near their workplaces.

A subtext was USC’s proposal to locate an industrial park for biomedical companies on land now owned by Los Angeles County next to the USC Health Sciences Campus. UCLA leaders were on hand to advocate clustering of biotech companies, including locating some on land UCLA is obtaining as a result of the closure of a U.S. Navy base in San Pedro.

Dean Stephen J. Ryan of the Keck School of Medicine of USC described the benefits a biotech park would bring to East L.A. – among them, 8,500 new jobs in the area with an average salary of $60,000, twice the current median. More than 15,000 additional jobs would be created elsewhere in the county, all adding up to a $1.3 billion surge in the local economy, he said.

Hahn observed that, with 13,000 already employed in bioscience in Los Angeles, the city should be seen as a bioscience leader, just as it is viewed as one in entertainment and aerospace. “But we haven’t put it together. I want to see us promote and expand our efforts” to make Los Angeles a great center.

“We have great resources,” Hahn said, citing the region’s research universities and other colleges and research institutions. But the bottom line for his administration is to “use dollars to get more dollars – and more jobs,” he said.

Rohit Shukla, CEO of the regional technology alliance, described how L.A.’s two anchor industries, aerospace and entertainment, are dispersed at major centers throughout the region, yet closely networked. “That’s a lesson for industry worldwide,” he said, adding that San Diego, a recognized biotech center, has a strong regional identity program – “bordering on hype” – that has benefited that city greatly.

The executive director of the Southern California Biomedical Council, Ahmed Enany, noted that there are more than 200 venture capital funds in the United States that invest in healthcare and bioscience firms. One-third, he said, have offices in the Boston-New York corridor. Another third are in the San Francisco Bay Area. “The rest are everywhere else,” he said, with but four firms in Los Angeles.

Hahn responded: “I’m surprised. We must do a better job of attracting venture capital for biotech.”

Others spoke of the difficulty in recruiting workers, not just scientists and top-level executives, but “touch workers,” those who do the manufacturing. Part of the recruiting problem is lack of education, particularly among high school graduates. “This is an era of documentation,” said Mark Ziering, president of Diagnostic Products Corp. “Our workers need to be able to write clearly. The public schools need to do a better job.”

Ziering echoed another widely held view on what hampers recruiting: lack of housing, which forces workers into longer and longer commutes – commutes that fewer are willing to make. As Andrew Neighbour, UCLA’s associate vice chancellor for intellectual property, put it: “L.A. can be a scary place for someone from Missouri.”

In closing, Hahn introduced a new team, led by Jeff Waldon, that he has assembled to help businesses start and grow in the city.

And then he pledged: “We will champion emerging industries. Why biomedicine? Because it’s about improving the quality of life, about extending life, enabling people to live fuller lives with first-class jobs.”

Those attending the meeting included:

LA’s new mayor zeroes in on biotechnology at USC