At a dinner on March 26 honoring more than 600 USC student veterans and members of the university’s long-running ROTC program, Petraeus said that never in the country’s history has a generation of young soldiers served so long in combat or on so many tours of duty abroad.

“The post-9/11 generation of veterans has deservedly become known as America’s new Greatest Generation,” Petraeus said. “USC stands out as a leader in the effort to support our country’s military families, veterans … those who currently serve our nation in uniform and those who will serve in the future.” 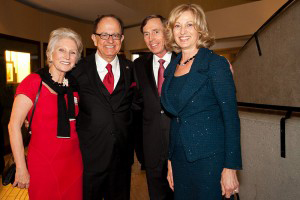 USC President C. L. Max Nikias, who hosted the event with Board of Trustees Chairman Edward P. Roski Jr., said he invited Petraeus to speak at the event after first being introduced to him a year ago in Washington, D.C., by Trustee Jane Harman.

“It’s our opportunity to express something we feel every single day on our campuses — sincere gratitude to you, our Trojan veterans and spouses, and members of the ROTC,” Nikias told the crowd, which included uniformed and decorated veterans. “We say it today, but we feel it every day.”

Petraeus’ first day at USC began before dawn on March 26 when he led 30 ROTC students in a rigorous workout that included four sprints up the stairs of the 100,000-seat Los Angeles Memorial Coliseum, followed by dozens of pushups and pullups. 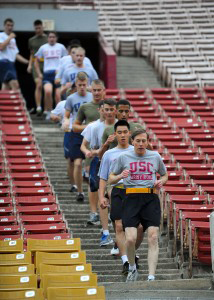 The USC officers-in-training marveled that Petraeus, 60, seemed to complete the movements without strain or deviation in form.

“It was definitely one of the fastest unit runs I’ve ever done,” said Brinton Mitchell, a senior majoring in chemistry, who said Petraeus pushed the group to a six-minute-mile pace.

Just before noon, Petraeus methodically circled a room at the Center for Innovation and Research on Veterans & Military Families, shaking hands with staff, faculty and students working toward a Master of Social Work (MSW) with a military specialization.

Among them was a woman who introduced herself as “a proud Marine Corps spouse,” a veteran who served as a battalion chaplain and David Barr, a former U.S. Army captain who completed a one-year tour in Iraq.

“God bless you,” Petraeus told Barr. “You all in one piece?” 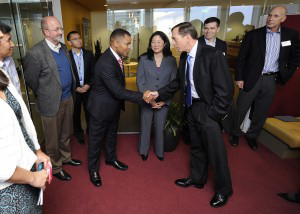 These students will join a nationwide cohort of 460 MSW graduates who have specialized in military social work, making them uniquely prepared to help those returning to civilian life cope with lingering mental health issues, find meaningful work, and reconnect with their families and communities.

“It’s not just about PTSD, it’s about ‘life has changed,’ ” said Anthony Hassan, the center’s director and a retired Air Force officer.

But for many of the veterans who struggle with emotional wounds of war, Hassan demonstrated the “Virtual Patient” — an artificially intelligent, animated U.S. Marine developed in conjunction with USC’s Institute for Creative Technologies (ICT) to simulate a veteran who has been exposed to combat stress.

“This is quite powerful,” Petraeus said, as a USC undergraduate demonstrated how she counsels the avatar on coping with the suicide of a fellow Marine.

While at USC, Petraeus also attended a lunch with several faculty, students and board members of the USC Price School of Public Policy, host of the ROTC program. Founded in 1943, the university’s ROTC program currently numbers 120 future officers in four branches of the military.

Among his other stops on campus: a demonstration of the USC Viterbi School of Engineering’s innovative work on 3-D printing technology that would allow computers to build structures remotely, layer by layer, and a meeting with veterans involved with The Mission Continues, a nonprofit organization that helps ease the transition to civilian life by connecting post-9/11 veterans with fellowships at nonprofits that offer a high civic purpose.

On March 28, Petraeus planned to tour the ICT, where a number of technologies have been created to treat and train service members, including a virtual reality exposure system used across the country as therapy for PTSD.

In his evening speech to USC’s men and women in uniform, Petraeus apologized for the events that led up to his resignation as head of the CIA but vowed to move forward.

“One learns after all that life doesn’t stop with such a mistake; it can and must go on,” he said.

He focused the bulk of his speech on the need to provide better treatment for veterans, soldiers and their families.

“There is often a view that, because an individual was a great soldier, he or she will naturally do well in and transition effortlessly to the civilian world,” Petraeus said. “In reality, the transition from military service to civilian pursuits often is quite challenging.”

The evening’s ceremony was punctuated by military tradition, and Petraeus received a standing ovation as he cut the cake with a sword — an honor reserved for the highest ranking officer in attendance.

“Tonight is not about me — it’s about your veterans, active duty and ROTC, and USC’s impressive efforts to recognize them and support their families,” Petraeus said later during his keynote address. “Tonight is an opportunity for me and for all of us to say ‘thank you’ to those selfless Americans that put it all on the line.”

Robynn Cox believes her family’s history with social justice and her desire for fairness laid the groundwork for her research career at the USC Suzanne Dworak-Peck School of Social Work.

She fights hunger one USC student at a time

USC social work master’s student MaryAnn Samson helps other students apply for CalFresh benefits with a smile — and no judgment.

Ell dedicated 37 years to USC, where she held the Ernst P. Larson Professorship of Health, Ethnicity and Poverty.