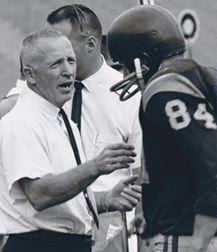 “I’ll never be hung in effigy,” John McKay used to say. “Before every season I send my men out to buy up all the rope in Los Angeles.”

That was typical John McKay – deflecting the pressure of his job as USC’s head football coach with humor. What he didn’t say, however, was that there was no reason to hang him in effigy, because he won almost all the time.

When McKay, who died in June at the age of 77, succeeded Don Clark as head coach after the 1959 season, USC hadn’t won a national championship in football for nearly 30 years.

Many people still call USC’s 1972 team the greatest in college football history. The Trojans went 12-0, outscored their opponents, 467-134, and never trailed in the second half.

As a coach, McKay was demanding, decisive, stubborn in his beliefs, and creative. As the inventor of the modern I-formation, he was a firm believer in the running game and was the first coach to prove that great running backs could carry the ball 25, 30 or 35 times a game.

Some observers were appalled. “Isn’t there anything you can do besides run the tailback?” they asked. “Why is he carrying the ball so much?”

McKay’s answer has become a part of football lore.

“Why not?” he said. “The ball isn’t very heavy. And besides, he doesn’t belong to a union.”

McKay’s teams also played consistently good defense – “I’ve never drawn a new play without drawing a defense to stop it,” he said once – and, like so many great defenses in football, they were built on speed. When no one could stop the Wishbone attack in the early 1970s, McKay and his teams stopped it.

More than 25 years after playing for McKay, former USC quarterback Pat Haden is still awed by another of McKay’s abilities.

“I think he was the best evaluator of talent I’ve ever seen,” Haden says. “He would recruit some freshman who was an All-American linebacker in high school, and the first day he would watch him practice and say, ‘You’re a tight end.’ Two years later, that kid was an All-American tight end. He had a great knack for putting a team together.”

He also had a great knack for getting your attention.

“He had absolute charisma,” Garrett, now USC’s athletic director, says. “His personality dominated a room. He was also a brilliant man. People underestimated how brilliant he was.”

When McKay’s team went to see the movie Patton with George C. Scott, there was an instant flash of recognition among the coaching staff. “My God,” they said, “that’s coach.” And, in many ways, John McKay was Patton.

A Life of Legend: John McKay as an assistant coach at Oregon in the 1950s
Courtesy of USC Sports Information

One of his greatest feats was turning the Notre Dame series around. The Irish, who dominated USC before he arrived, also won five of their first seven games against McKay, including a shocking 51-0 defeat in 1966.

Coached by Ara Parseghian, Notre Dame was national champion in 1966, but the score kept growing because McKay kept gambling. He wouldn’t give up.

After the game, he wouldn’t give up either. For the next year, the Trojan coach watched a film of the game at least once a week. He was determined to beat Notre Dame in 1967.

“For a year, there wasn’t a night I went to bed or a morning when I awoke that I didn’t think about 51-0,” he said later. “It was still stuck in my throat.”

In 1967, he and his team had to fly to South Bend, where no USC team had won since 1939. A lot of people at the time said the Trojans couldn’t win in South Bend, no matter what year it was. The oddsmakers agreed. Although ranked number one, USC was a 12-point underdog.

“But I have never believed in jinxes,” McKay said. “We should be good enough to play football anyplace and win.”

They were. Simpson rushed for 150 yards, linebacker Adrian Young intercepted four passes, and USC won, 24-7. The Trojans went on to win the national championship.

In his last nine years, McKay lost to Notre Dame only once, going 6-1-2 against Parseghian (eight years) and Dan Devine (one). One of those six victories was the Trojans’ incredible 55-24 blitz in 1974. Trailing 24-0, they scored 55 points in less than 17 minutes to win.

“The man could coach football,” former USC quarterback and assistant coach Craig Fertig says. “He coached every day of the week, 365 days a year. That’s what made him so special.

“You expected a lot out of yourself because of him. He expected you to come through. There were no excuses. The bottom line was, ‘We’re going to win the damn game.’”

John McKay, God rest his soul, won a lot of them.

A Life of Legend

Sportswriters across the country took up their pens to eulogize him. “This was the best football coach, college or pro, of the past 50 years in Los Angeles, and one of the three or four finest in America,” wrote the Orange County Register’s Steve Bisheff.

“McKay redefined USC football, raised the bar so high not even Trojan great Bob Seagren could vault it,” wrote the Los Angeles Times’s Chris Dufresne. “McKay was so good … he left the program in a perpetual state of unattainable expectations. There was USC football tradition before McKay, but you’d have to remember how to do the Charleston to recall it. McKay gave USC football the attitude UCLA and Notre Dame fans came to hate, but grudgingly admire. McKay turned USC into a power to be feared nationally.”

As much as they admired his skill, sportswriters also loved him for his acerbic wit. “If a writer couldn’t get a good quote from McKay, it was time to consider going into another line of work,” wrote Jim Donaldson for the Providence Journal.

“He was the football equivalent of George Burns, as quick with a quip as he was at drawing up some innovative new play,” said Bisheff. “Covering him was like being part football beat man and part comedy writer. Often, you found yourself laughing too hard to scribble down his last quote.”

Born in 1923 in Everettsville, W. Va., the son of a coal miner, John Harvey McKay was an all-state running back and basketball guard in high school. He worked a year in the coal mines before enlisting in the Army Air Forces during World War II. In 1946, he entered Purdue University and started at defensive back. After a year, he transferred to Oregon, where he was a two-way player. His Oregon career rushing record of 6.1 yards per carry still stands.

In 1950 he began his coaching career. McKay was an offensive and defensive assistant at Oregon, his alma mater, for eight years, first under Jim Aiken and then Len Casanova. The position paid so little that he had to take a second job as a night watchman in a lumber yard to make ends meet. In 1959, he joined USC as an assistant coach.

When he took over as head coach the following season, he began a new chapter in Trojan football history. His overall record, before he left in 1976 to coach the NFL’s Tampa Bay Buccaneers, was 127-40-8. In 1988, McKay was elected to the College Football Hall of Fame.