There isn’t enough money to fund every worthy cause. That was the hardest lesson learned in a fall course in which USC students chose how to distribute $10,000 to up to five deserving Los Angeles-based nonprofits.

“It really is a simulation of reality and the situation that a lot of nonprofits face these days,” said Professor Emeritus Richard Sundeen, who teaches the course through the USC Price School of Public Policy. “There are not many philanthropic dollars out there right now, and there’s not much government money available. It’s a really critical problem these days.”

Tough economic times haven’t stopped the Learning by Giving Foundation from providing a $10,000 grant for this unusual hands-on philanthropy course at USC. Started in 2003 by Doris Buffett, sister of investor Warren Buffett, the growing program also supports similar courses at 31 other colleges and universities across the nation.

As part of the USC course, each student selects a nonprofit and researches different facets of the organization, including its history, purpose, capacity, governing structure, resources, budget, measurable results, transparency, reputation, current challenges and future plans. The student identifies a need at the organization that could be met by a gift of between $2,000 and $10,000, and then makes a presentation to the rest of the class asking for the money.

After a spirited session of voting and discussion, the class decided to divide the money among four local youth programs, giving $3,000 to A Place Called Home (APCH), $2,500 to Inner-City Arts, $2,500 to The United Friends of the Children and $2,000 to Kids Enjoy Exercise Now (KEEN) Los Angeles.

Junior Stephen Lim, a business administration major with minors in psychology and in nonprofits, philanthropy and volunteerism, chose to pitch on behalf of APCH, a center that offers educational programs, arts classes, athletics, recreation, counseling and mentoring for at-risk youth in South LA.

His classmates at USC agreed, and APCH’s $3,000 grant will be used to purchase six iPads and five “MaKey MaKey” systems for a music class for younger students.

“If you educate children at a young age and get them engaged in school and learning,” Lim said, “then they stay motivated, and they can prove to themselves that they have more potential than they think.”

Senior Sarah Sensenbach, a psychology major with a minor in theater, received $2,500 for Inner-City Arts, which provides arts education for children on Skid Row. The organization will use the funds to build a music recording studio for high school students.

“This instruction in arts has actually improved their learning in completely unrelated subjects, such as math and reading,” she said.

After graduation, Sensenbach plans to pass along the lessons from this course during her two-year commitment with Teach for America in New York City. She’d like to adopt a model similar to the Penny Harvest, a program that assists elementary school students who run penny drives and donate the proceeds to charity.

“I’m excited to implement it on a smaller scale for my students — just to put it into their hands and show them that they can have an impact by raising funds and choosing who to give to,” she said.

Junior Ryleigh Chen, a business administration major with minors in global communication and in international policy and management, received a $2,500 grant for The United Friends of the Children, a nonprofit dedicated to bettering the lives of foster children. The grant will support the College Readiness Program, which instills a college-minded culture and supports academics and well-being for youth in grades seven through 12.

Senior Maggie Altergott, a double major in Spanish and anthropology, secured a $2,000 award for KEEN Los Angeles, a volunteer-led nonprofit that builds skills and self-esteem through free recreational opportunities for disabled children and young adults. The money will buy new equipment and specialized toys for the Elysian Park recreation center, where KEEN holds its sessions.

Almost all of the students in the class chose to pitch on behalf of nonprofits related to social services, such as remedial or enriched education, health, housing, job training and hunger relief. 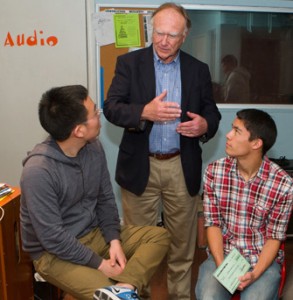 “Most of them had something to do with poverty or with some of the implications of poverty,” Sundeen noted.

Even though Sundeen officially retired two years ago, he has continued to teach the class each fall because he said he enjoys teaching about nonprofits and working with “a group of bright and enthusiastic young people.”

The Learning by Giving project is “hands on,” Sundeen said. “Compared to academic readings and discussion, it gives the students a different and more experiential perspective on philanthropic giving and the challenges faced by numerous nonprofits.”

USC’s Paul Ginsburg elected to the National Academy of Medicine

Ginsburg, a senior fellow at the USC Schaeffer Center and professor of practice at USC Price, was recognized for his role in shaping and influencing health policy.