Movie buffs got to enjoy the presence of Korean film royalty earlier this month at the USC Korean Film Festival. Organized jointly by the USC Korean Studies Institute and the USC School of Cinematic Arts (SCA), the festival spotlighted the works of director Choi Dong-hoon, one of the country’s biggest names in cinema.

Held at the Eileen Norris Cinema Theatre, the two-day festival ran March 1-2 and featured screenings of all of Choi’s blockbuster films, many of which are populated with double-crossing criminals, epic heists and even a bit of Korean folktale wizardry.

In his own country, Choi’s name is inescapable. His current film, The Thieves, follows a group of cunning jewel thieves as they try to steal a $20 million diamond locked away in a Macau casino — and turn on one another before the job is done. With its quirky characters and exhilarating set pieces and montages, it has drawn in enough moviegoers to become the highest-grossing film in South Korea’s history. That’s saying a lot for a burgeoning film industry that has come of age, converting new fans throughout Asia and the states alike.

David James, chair of the Bryan Singer Division of Critical Studies at the SCA and a principal organizer of the event, said the enthusiastic reception for Choi and Korean film was a long time coming.

“Korean cinema has been exploding in Korea and all across East Asia for the past 20 years,” James said, noting that 1999 was a watershed moment. That year marked the start of Hallyu — or “Korean wave” — a term coined by a Beijing journalist to describe the spreading popularity of Korean culture, ranging from pop music to food. One could argue that Psy’s 2012 hit “Gangnam Style” was a recent breakthrough of the Korean wave into American culture.

Korean cinema, however, has developed its own momentum. 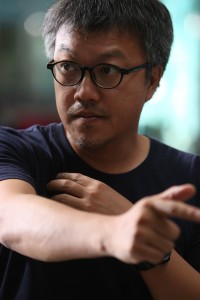 Choi Dong-hoon is one of South Korea’s biggest names in cinema.

“We chose Choi Dong-hoon because his spectacular action sequences seem to have opened a new chapter in Korean cinema,” James said.

The unassuming, 43-year-old Choi is thoughtful and soft-spoken in person, but lights up when asked to explain his love for the heist genre. He counted classics among his favorites: Stanley Kubrick’s The Killing, John Huston’s The Asphalt Jungle and European takes on the genre such as Jean-Pierre Melville’s Le Samouraï.

“In the world we are living in, there are clear distinctions between the good and bad, whether we are educated, or rich or poor,” Choi said through a translator. “In the heist film, they are all criminals. But within that group of criminals, you have to figure out which one is good and which is bad.”

There’s an air of cool in heist films, too — something that plays well with Korean audiences. When asked to describe the distinctive essence of Korean movies, Choi pointed out that his culture is very driven by relationships and the temperament of its people.

Koreans “have a hot temperature. There’s a very emotional side to the culture. In films, all the characters are ‘cool,’” Choi said. He jokingly affected a laid-back confidence — the swagger of a Hollywood safecracker.

What Choi wants to do, however, is portray Korean culture for the world the way he sees it, with a more intense, emotional side.

“The Koreans want to be cool; they want to look cool,” he said. “But inside of them it’s very hot.”

As Year of the Tiger begins, Trojans share how they celebrate Lunar New Year

USC students, faculty and staff members will be among the billions of people worldwide celebrating Lunar New Year on Feb. 1.

As president and vice president of the USC Veterans Association, Johnny Walker and Seulki Noh make a powerful pair.

The protein appears to have a big role in regulating the immune system, USC’s David Lee says.