Master of Planning (MPL) Students at the USC Price School of Public Policy introduced 100 middle school students to the importance of urban planning as part of a collaboration with the GEAR UP program at the Robert F. Kennedy community schools.

During two four-hour visits on Feb. 15 and Feb. 22, the seventh-graders listened to tales of encouragement from USC Price faculty and students, enjoyed a scavenger hunt around the University Park Campus, and used building blocks to design parks and malls that they would want to see in their neighborhood.

GEAR UP, which stands for Gaining Early Awareness and Readiness for Undergraduate Programs, is a federal grant awarded to the Los Angeles Unified School District that aims to increase student success in high school with counseling, tutoring, mentoring and education about college and careers.

The collaboration was arranged by Nina Idemudia, a first-year USC Price MPL student who also works as a program assistant for GEAR UP.

Idemudia approached her supervisor, GEAR UP coordinator Michael Sabin, about organizing a trip to USC. GEAR UP likes to take children to a college campus each semester to expose them to college students and the university atmosphere.

Idemudia suggested bringing the schoolchildren to USC Price, a first for the program, to expose youngsters to a specific school within a university. She coordinated with MPL program administrator Julie Kim to gain USC Price’s involvement and then with Peter Enzminger, president of the Associated Students of Planning and Development, to attract volunteers from USC Price’s planning students. They also helped her plan the curriculum for the day.

“I’ve always felt that mentorship was very important, especially for me, because growing up my mother was in prison,” Idemudia said. “I always participated in different programs that talked about the importance of college and put you on a university so you could see what different campuses offered.

“I approach planning as a way to make equitable communities for everyone,” she added. “I felt that working with these students, most of whom come from low-economic status just like me, why not expose them to college and to planning all at the same time. They learned about a career where they can actually implement physical change to their neighborhoods.”

Marlon Boarnet, USC Price director of graduate programs in urban planning, opened the day by explaining to the children how more than half of the people in the world now live in cities.

As people crowd into cities, the way they fit into the environment is going to become more important. The world the children will live in when they are his age will look very different, Boarnet explained, and through urban planning they can play a role in making life better.

Among the highlights for each day was the interactive planning activity in which the children broke off into five-person groups and used specialized building materials on the table to make their own park and mall. They then had to explain why they chose to include each element, and the graduate students served as a city council and voted for the best design.

“It’s really energizing for me to see how these students connect with the field and also how they approach questions of space,” Enzminger said. “The most rewarding part for me was watching them work to build something together. You can see their brains working on ‘what can this block be, what can I prioritize.’ ” 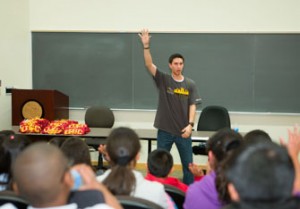 Jesus Herrera — a senior pursuing both a bachelor’s in policy, planning and development and an MPL, as part of the USC progressive degree program, as well as a minor in architecture — shared with the children his experiences growing up as a son of Mexican immigrants in a low-income household in Inglewood, Calif. About half of the children responded that they were also the children of immigrants.

Herrera said college wasn’t a hot topic when he was growing up. He recalled a key moment in his life when he was recruited to join a gang as a teenager. He initially felt like he should join what he viewed as these cool kids in school who garnered respect, but ultimately declined because he knew that joining a gang would mean he would stop getting good grades in school and risk getting in trouble with police.

“That’s why we all push you to go to college because when you go to college, you are allowed to escape those places,” Herrera said. “You can become someone else. You can learn about something you never even thought about.

Leonard Mitchell, executive director of the Center for Economic Development at USC Price, handed out USC T-shirts to each child. The youngsters also received a handwritten note from a USC student.

Sabin said that when he told the children about the trip, none of them knew there was such a job as an urban planner. They all wanted to be doctors, lawyers, policemen and teachers. By the end of the day, some students raised their hands to indicate they wanted to be planners.

“The fact that we had students raise their hands, that they are interested in being urban planners, something that they’ve never known, I think is a very positive impact,” Sabin said. “It’s opening up a new world for them.”

The agreement will provide a quarter of USC’s electricity with power from a solar farm in Mojave. It also brings new opportunities for residents in nearby communities to gain access to affordable solar power.