Inspired to take creative action and draw attention to this global development, the two have created Aging People/Aging Planet, an exhibition that will run from March 2 through June 21 at USC’s Institute for Genetic Medicine Art Gallery on the Health Sciences Campus.

“Our hope is that the show will inspire people to use art as a tool to teach the younger generation to express their concerns for this situation,” Dauray said. “We want them to realize that everyone has the innate potential to creatively help our planet.”

The seed for the show was planted back in 2003 after the most intense heat wave since 1540 swept Europe, leaving thousands of older adults dead. Horrified by the events, Dauray and Makleff began to research the connections between massive climate change and the health of the population most susceptible to it: the elderly.

According to a recent report by the National Institutes of Health: “Elderly adults living in poverty or on limited fixed incomes may lack resources to pay for air conditioning during heat waves, they may live in substandard housing that leaves them more vulnerable to flooding and strong winds, or they may not have easy access to social services or to adequate transportation to evacuate when devastating weather events occur. In addition, functional and physiological limitations associated with aging could impede elderly people’s ability to adapt.” 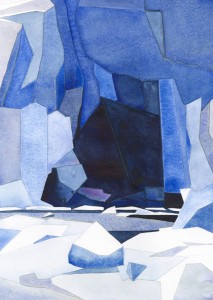 So what can be done? One solution to both substandard housing and the unique challenges to the elderly during natural disasters is universal design. This includes a set of principles that create safe and accessible environments and communities for people of all ages and abilities. Additionally, increased awareness by all ages of this population’s potential vulnerability can go a long way in preventing unnecessary tragedy and hardship.

Makleff and Dauray hope that their show will open eyes and hearts, as well as start important discussions that don’t just concern older adults but also include and empower them. Making all this possible is the transformative power of art: a force as universal as the weather itself.

“Making art always been a way to learn, to see and to teach,” Dauray said. “With this show, our hope is that our art will speak eloquently to a worldwide issue and potentially help effect real change.”

Reductions in suicide were greatest among older adults, raising questions about how to better serve younger people with mental health challenges, a USC Price study finds.

Study suggests changes in strength and mobility may depend on genetic variations in a critical mitochondrial enzyme and provides a new biomarker linked to age-related muscle health.

Keeping the planet healthy could help people have healthier lifespans, too

EARTH WEEK: Experts at the USC Leonard Davis School of Gerontology share why caring for the environment can help people as they age.

HSC exhibition turns up the heat on climate change