Changes to the temperature and chemistry of Earth’s atmosphere are also causing fundamental changes to the ocean. The water is getting warmer and more acidic, and those changes may reconfigure the microbial communities that create the foundation of marine ecosystems.

Scientists at the USC Dornsife College of Letters, Arts and Sciences are at the forefront of efforts to predict the future for marine microbes, and to do that they are combining marine biology and evolutionary biology in the context of global climate change. It’s a new field that requires new scientific models, said David Hutchins, professor of biological sciences at USC Dornsife.

“One emphasis is on developing new marine model organisms that are relevant to marine ecosystems and can be used in experimental evolution,” he said.

These new models must address a kaleidoscope of conditions that determine the fate of marine microbes, said David Caron, professor of biological sciences and former interim director of the Wrigley Institute for Environmental Studies at USC Dornsife.

The microscopic impact of global climate change has been the subject of inquiry at USC for several years.

Hutchins organized a conference in 2010 at the Wrigley Marine Science Center that attracted 40 researchers from around the country to discuss themes for research on the evolutionary implications of ongoing physical and chemical changes to the ocean.

Caron and Hutchins recently published an article in the Journal of Plankton Research to discuss new lines of research, and they are investigators for an ongoing grant from the National Science Foundation (NSF) that led to the recent publication of a paper by a PhD student in Hutchins’ lab.

The USC Dornsife researchers are working in new territory with these experiments, considering the many combinations of changes that might occur in the ocean over coming decades, including changes to water temperature, water chemistry, oxygen levels and even clarity and penetration by ultraviolet light.

Hutchins said scientists already have subjected marine microbes to the warmer, more acidic conditions that are predicted for the future, but those experiments have typically run for only a few weeks. He said that is too short to determine if and how marine microbes might adapt.

“Most experiments have been very short term,” he said. “You might take some phytoplankton and put them in acidic conditions for two or three few weeks and then try to understand the impacts on the organisms. A criticism of those types of experiments — and a valid one — is that stressors such as ocean acidification and global warming happen slowly, over a period of decades, and that organisms do evolve and adapt.”

Changing environmental conditions might select for genetic variants that already exist and can thrive under the new conditions or they may select for mutations within some species or strains that will give them a future advantage in water that is warmer, more acidic or both.

Endless combinations of temperature and acidity might affect microbes in countless ways, and as each species reacts, it could start to prompt other reactions within its own microscopic community.

“You have to be cautious about interpreting short-term experiments as fully predictive of long-term trends,” Hutchins said.

Caron, Hutchins and other USC researchers have been conducting the first of a series of long-term experiments on the reaction of microbes to increasing levels of carbon dioxide that’s dissolved in seawater, a change that is lowering the pH of the water and making it more acidic.

Samples of microbes were incubated for two weeks at three different levels of dissolved carbon dioxide, all of them higher than normal. At the end of the incubation, samples of the dominant species were isolated and bred in separate cultures for up to a year, continuing at the higher CO2 levels.

The microbes in these samples were no longer “naïve” about life under the higher levels; the survivors and their succeeding generations now had experience dealing with them and adapting to them. 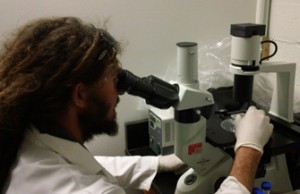 The experiment was run by Avery Tatters, a PhD student in Hutchins’ lab within the USC Dornsife Marine Environmental Biology program.

“We focused on four dominant species of the dinoflagellates — the ‘winners’ of the initial experiment — that were alive at the end of the two weeks,” Tatters said. “We grew them separately under the higher CO2 concentrations in which they were isolated. Then we periodically recombined them — at four, eight and 12 months — and assessed the competition.”

The results of the research were published earlier this year in the online version of Evolution: International Journal of Organic Evolution. Tatters is lead author on the paper, and Caron said Tatters’ work was critical to this experimental study.

The article reported that the dominant species in the initial seawater samples no longer dominated the samples after the initial two-week incubation and that each of the three different CO2 concentrations yielded a different dinoflagellate assemblage at the end of the incubation period. In addition, the species that were dominant after the two-week run were not in that position at the end of the entire 12-month run.

The research indicated that CO2 concentrations can and do affect the structure of phytoplankton communities. However, the experimental manipulations do not necessarily predict longer-term evolutionary shifts that might result from higher CO2 levels. The research did not provide unambiguous evidence that the organisms that either adapted or acclimated to higher CO2 during the incubation period had a strong competitive advantage when they were returned to mixed communities later.

“There is not a definite ‘conclusion’ to this experiment,” Tatters said.

Tatters is the lead author on a new paper, currently in review by the Philosophical Transactions of the Royal Society B, that presents a similar one-year adaptation experiment with a community of diatoms from New Zealand coastal waters. Unlike the experiment with dinoflagellates from California coastal waters, the initial short-term incubation of diatoms from New Zealand served as a fairly good predictor of long-term trends in their community structure.

These experiments are the first of their kind, and the USC researchers are gearing up for a new four-year NSF grant to continue this type of study with cyanobacteria and variables that include various concentrations of carbon dioxide and different temperatures for the water they inhabit. Hutchins is the principal investigator, and the co-principal investigators are Feixue Fu and Eric Webb, associate professor of biological sciences at USC Dornsife.

The future for these microbes will be shaped by a broad spectrum of responses to multiple variables of environmental change.

“These are biologically interacting groups of organism,” Caron said. “The species are interacting with each other and reacting to all of the environmental, physical and chemical factors around them, so it’s very hard to predict how communities of organisms will respond.

“Part of our experimental approach is tweaking entire communities of organisms to see how they react because ultimately we want a holistic approach — we want to know a lot about each of the species that are players in the game,” he explained, “and at the same time, we want to know how the whole game is being played out.”

How climate change affects the ocean and planning for the city of Los Angeles will be discussed during a conference from 10 a.m. to 5 p.m. on March 12 at Doheny Library. The colloquium will focus on ocean health and human dimensions in a changing climate.

In 2010, USC Dornsife funded a three-year collaborative project titled “Climate Change in the Southern California Bight,” directed by Hutchins and Douglas Capone, holder of the William and Julie Wrigley Chair in Environmental Studies and professor and chair of biological sciences at USC Dornsife.

A main scientific goal of the project is to increase communication and promote collaboration between the diverse group of researchers who deal with all aspects of ocean climate change issues in the Los Angeles area.

The project is part of USC Dornsife 2020, which is aimed at encouraging USC Dornsife faculty to work across existing departments and programs to identify a set of themes that will be of great societal relevance and importance in years to come.

Those who want to attend the upcoming workshop “Human Dimensions and Ocean Health in a Changing Climate” can RSVP to Helga Schwarz at helgasch@usc.edu by March 5.