If you’ve been getting your weather forecasts from the thermometer at the Los Angeles Memorial Coliseum, you’ve really been walking on sunshine: Every day, without fail, has been a pleasant 70 degrees.

Tired of seeing the inaccurate reading calibrated on the Coliseum’s thermometer, USC Viterbi School of Engineering student David Cape decided it was time for an update.

Installed in 1955, the legendary stadium’s thermometer was a symbol of art deco beauty — a minimal statement of elegance at the face of the stadium’s entrance.

But over the past few decades, the thermometer eventually became an unlikely poster child of the Coliseum’s apparent disrepair: After its mechanical failure, the thermometer’s components were gutted, and they were never replaced.

Cape, a member of the USC drumline, spent day after day marching throughout the facility.

And as chance would have it, his final hurrah as a mechanical engineering student would be inextricably bound to the fate of the thermometer.

Last summer, Cape, along with two other student groups (one team per senior design class), submitted proposals to fix the thermometer — an idea gleaned from a senior project suggestion list in the Department of Mechanical Engineering.

“We could choose something from that list or create something new,” Cape said. “I was really excited about this project.” 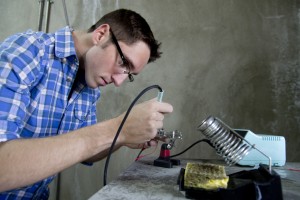 After teaming up with Charles Palmer, Ryan Magruder and Andrew Ezarik, Cape led the group with a budget of $300. Eventually, they created the prototype that would win over professors Yann Staelens and Charles Radovich, as well as Los Angeles Coliseum Commission (LACC) interim General Manager John Sandbrook and Project Manager Robert Joyner.

What was initially a modest proposal became an opportunity to work with a more sophisticated budget — and a “beefier system.” At a budget estimate of $280, Cape and his team originally proposed a system that would have moved the thermometer’s needle.

The LACC decided to allot a $1,000 budget that would enable the students to include various things the commission wanted, including a battery backup in case of power failure.

“[LACC] really liked the idea of the thermometer going to 70 — because it’s been that way for years — so if the power goes out or you turn the power off, [the thermometer needle] automatically goes back to 70 degrees and then shuts itself off.”

Today, thanks to Cape’s team, the new thermometer system is mainly software-controlled. There’s a “black box” that takes in sensor readings, which then outputs controls for the motor. The system averages two disparate temperatures — one from a sensor housed within the concrete of the roof and one located in a consistently cool, shady area.

For now, the team continues to put the finishing touches on the new system, a labor of love for Cape and his partners.

“I thought it’d be really cool to end my senior project with fixing the place I spent most of my Saturdays,” he said.

Someday soon, generations of students spending their weekends at the Coliseum may actually see the temperature go above or below 70 degrees — that is, unless the weather really is that great.

Along with seven other collaborating research universities, USC Viterbi will help cultivate deep technology businesses in the western U.S.

While many K-12 students have adapted to online learning, a USC study finds that some families have had trouble accessing devices or reliable internet connections, especially Hispanics who primarily speak Spanish.

It’s always sunny in the Coliseum