You’ve seen them along Southern Californian coastlines. They can be described as an occurrence that provides surfers with an opportunity to become “one with nature.”

The perfect wave is an endless, open barrel with optimal conditions for maneuvering. Every day, surfers line up along the coast waiting for that one unpredictable offering from the sea. They don’t just dream of it. They crave the consistency of it, the power to cheat Poseidon and produce such waves on command.

But Kelly Slater, 11-time world surf champion, has a passion to make this vision a reality.

“This is the wave I’ve been dreaming about my whole life,” said Slater, whose pioneering efforts may bring about a new renaissance to surf culture.

Since 2007, Slater’s Kelly Slater Wave Co. has collaborated with USC Viterbi School of Engineering Research Professor Adam Fincham and others on wave-generation technology that may soon satisfy every surfer’s desire for the perfect wave.

The technology allows the wave to run continuously around an island in a donut-shaped basin, where waves can be adjusted to suit an individual’s skills or preferences. The development is called the “Kelly Slater Surf Experience.”

“What we have is something totally unique,” Slater said in a YouTube video. “I know we’re going to make the best wave anyone’s ever made. We can potentially ride indefinitely on an endless wave and do any maneuver you want to do.”

Added Slater, “The technology is there, the basic blueprint of what we’re going to do is there, the desire for people to build it and run it is there. It’s going to happen.” 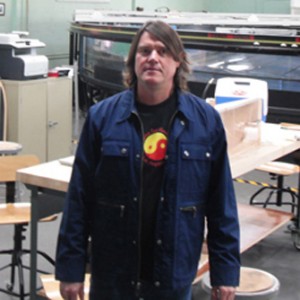 Fincham, who grew up in Jamaica. came to USC Viterbi as a transfer student from the University of the West Indies when his father was hired as a USC faculty member. The relocation was a pivotal point in Fincham’s academic career and in his pursuit of the perfect wave.

Spedding taught Fincham to surf throughout his undergraduate, graduate and doctoral degree programs between 1985 and 1994.

After earning his doctorate in aerospace engineering — under the tutelage of Distinguished Professor Tony Maxworthy, a renowned expert in experimental fluid dynamics and aerodynamics — Fincham relocated to Grenoble, France. The purpose of that move was to conduct research on geophysical fluid dynamics, including the dynamics of ocean waves at Laboratoire des Ecoulements Geophysiques et Industriels (LEGI).

While at LEGI, Fincham developed a keen understanding of how ocean waves developed. He also gained a unique opportunity to study their effects on piers, breakwaters, offshore platforms and other structures.

Fincham, who met many European researchers with similar interests along the way, was exposed to an array of other large wave tanks.

“LEGI is home of the Coriolis Platform, a round tank which is the world’s largest rotating fluid mechanics facility,” Fincham explained. “It’s massive and can be used to model various geophysical flow phenomenon influenced by the Earth’s rotation.”

After nine years in Europe, Fincham returned to USC to continue his research as an aerospace and mechanical engineering associate professor. At the USC Wrigley Institute for Environmental Studies, Fincham collaborated with Professor Tony Michaels.

When Michaels became aware of Slater’s dream to build a machine that could produce the perfect continuous wave, he turned to Fincham and his USC Viterbi colleague Professor Larry Redekopp, whose expertise in fluid dynamics theory was a readily apparent asset to the project.

After an initial meeting with Slater in early 2007, the USC Viterbi team — Redekopp, Fincham, Maxworthy and Professor Fred Browand — were contracted to conduct a feasibility study.

The team concluded that a donut-shaped tank with vertically orientated hydrofoils rotating around the perimeter would likely lead to success. Based upon the team’s report, the Slater Wave Co. built an off-campus research facility, where it has developed a scale model of a round wave tank with rotating vertical hydrofoils. The patented design will soon be scaled up to its full dimensions.

The company also has funded Fincham’s continuing on-campus research with almost $600,000 to date.

“We are ready to do it,” Fincham said. “Our partners envision a resort hotel and a community of surfing enthusiasts who will come in search of — and find — Kelly’s perfect wave.”

Along with seven other collaborating research universities, USC Viterbi will help cultivate deep technology businesses in the western U.S.

While many K-12 students have adapted to online learning, a USC study finds that some families have had trouble accessing devices or reliable internet connections, especially Hispanics who primarily speak Spanish.

In motion with the ocean