This small act of politeness may seem like nothing to most people. But as she sits in a folding chair next to these women — these ladies — Hongo recognizes that for many of them, even the most basic courtesies may be all that they will ever know.

These female inmates ages 55 and over — known as “Golden Girls” — are serving time at the California Institution for Women (CIW) in Corona, Calif., for a variety of crimes, including murder. Still, Hongo never loses sight of her belief that these ladies are not their convictions and they are not their crimes.

“I see more despair in the older women. They try to help each other because they know no one else will,” she said. “The years, even decades, of distrust and constant vigilance have taken their toll. These women were broken when they came in and made worse with age-related frailties as the years go by.”

Largely forgotten by society and facing additional challenges as older women aging behind bars, the Golden Girls eagerly await visits from Hongo — a USC Davis School of Gerontology alumna and a current graduate student at the USC School of Social Work — and her therapeutic collective, fondly known as “the Healing Squad.”

Her interest in geriatric prisoners began in 2006, when she first visited CIW for a class assignment.

“The faces of the women haunt me to this day,” Hongo recalled. “I have never forgotten their pleas for assistance in getting eyeglasses with the correct prescriptions or dentures that fit.”

For all the good that it’s been able to achieve, the Healing Squad runs on less than a shoestring budget. In fact, Hongo doesn’t even get paid to run her art therapy courses. She has to dig into her own pockets for art supplies and snacks.

One of the more recent art classes started off with disappointing news: Hongo forgot to bring the certificates of completion for the ladies who had attended each of the sessions. It was a minor mistake — schedules change so quickly within a prison thanks to lockdowns and cancellations, and this was a hastily assembled make-up session — but Hongo knew how much even a piece of paper could mean to a prisoner.

“I’ll mail them to you,” she said, genuinely upset, which seemed to appease many of the women who had been whispering among themselves about their certificates, discussing the best places in their cells to hang them and calling themselves graduates with quiet pride.

Many of the Golden Girls are imprisoned for murdering their abusive spouses or lovers. And many of them also require walkers or other assistive devices.

Though there are sympathetic prison employees and volunteers who go out of their way to extend the same considerations Hongo does, in large part, many of these women say they feel forgotten by the outside world. The presence of Hongo and her colleague, social worker Marilyn Montenegro, even just for one hour every month, is a small reminder that these women are not alone, and that, regardless of their convictions, they are not universally scorned and despised.

Advocating for prisoners’ rights can often be like tightrope walking: There’s a strong social stigma against incarceration and the knee-jerk reaction of many is to say that prisoners — aging or otherwise — do not deserve special considerations. 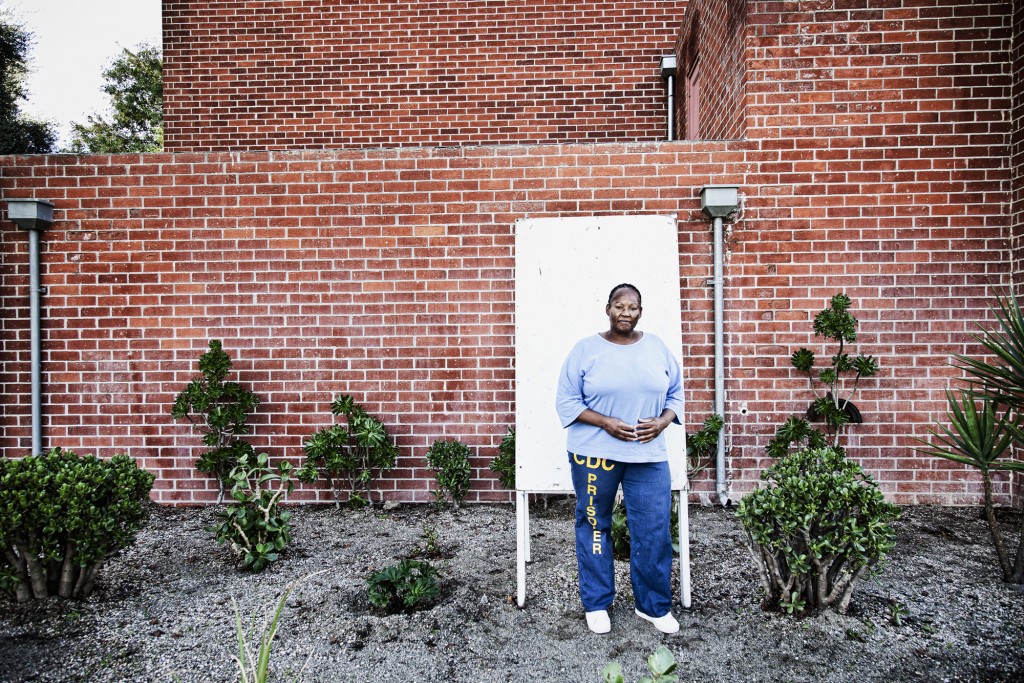 Many of these women say they feel forgotten by the outside world. (Photo/Ron Levine)

“I think ‘special’ may have misleading implications. Aging prisoners deserve appropriate housing, medical care and programs,” Hongo said. “Isolation is the punishment, but there is added cruelty and/or humiliation when forced daily activities cannot be performed due to age-related capacities.”

According to Hongo, studies have found that inmates exhibit the negative aspects of aging more quickly than their outside-world generational counterparts. She also described multiple instances in which prisoners who had been incarcerated for decades and are released often lack the coping skills or knowledge of modern-day life to successfully reenter society.

“Prisons are one of the few institutions that require uniformity for a continuum of generations,” she said. “There are few, if any, considerations for age-related changes. For example, younger prisoners can easily walk across the yard or climb stairs in a timely manner, eat meals in 15 minutes, shower in stalls without bars or remember a special schedule. But these same activities may be extremely challenging for aging prisoners, and safety/health risks escalate, as well as costs.”

Hongo sees an enormous opportunity for gerontologists and social workers to work more closely with older inmates, and hopes to help set up an internship program. Dying with dignity is of special concern to Hongo, as she has witnessed the worst — incarcerated women who end their lives alone while handcuffed to hospital beds — and the best — the compassion of fellow inmates who sometimes keep a vigil for their ill and dying comrades — of human nature at the end of life.

Hongo and the Healing Squad end every visit with an open discussion for the ladies to air their concerns, a time that some participants say they need even more than their art.

During one discussion session, the inmates shared some eye-opening incidents — including being repeatedly prescribed Tylenol despite a decades-on-the-books confirmed allergy — that reaffirmed a group-wide frustration in their ability to not just receive adequate medical care but also earn basic respect or even be heard.

“No one cares,” said one woman, balancing on a walker, “especially when you’re old.”

It was an unsatisfying note on which to end, but as the crayons and colored pencils, stickers and papers were being collected, it was a stark reminder of the reality that awaited the ladies now that the sessions were over. Clutching their day’s creations — artistic depictions of treasured childhood autumns — most of the ladies filed out, but one walked out empty-handed.

“Don’t you want this?” called out a woman, her white hair falling softly around her face like a storybook grandmother, as she held up the art piece.

The woman at the door paused, patting the wilting pink rose in her breast pocket. She had spent most of the session describing wonderful things — both expensive and not, nevertheless all immensely valuable — from her past that ignited a hungry gleam in the eyes of several of her fellow Golden Girls. Her drawing reflected all of this: the gourmet cooking lessons, the hot mugs of homemade apple cider, the sight of her children playing on a playground — the things these women had left behind; the things these women carried with them everywhere.

“You can have it,” said the woman as she left, quickly, determinedly. “I remember how it all was.”

“Thank you,” the other woman said softly, picking up the paper. “I’ll send this to my babies.”

As Hongo packed up the art supplies into her rolling teal-colored cart, she started to formulate a new idea.

“Maybe we could start a geriatric health fair,” she said, thinking about the next time she would visit and the countless needs she saw in the ladies.

But projects cost money and need backing, not just to launch but to sustain and to grow.

Hongo needs a grant. And she needs it desperately.

Like any social worker or person launching a crusade for compassionate change, Hongo is used to rejection and to the slow-moving and occasionally crushing wheels of bureaucracy. She is disheartened at times and discouraged at others, but never for very long. After each setback or roadblock, she merely collects her considerable energy, reflects on the countless friends and allies she has made in this largely self-funded fight, and remembers the women — and the men, too — for whom she is fighting.

Many of the Golden Girls are imprisoned for murdering their abusive spouses or lovers. And many of them also require walkers or other assistive devices. (Photo/Ron Levine)

Hongo spends a lot of time on the phone and on email, begging the prison not to cancel her classes or to rebook the room in which she holds them, and rescheduling when they do. Although she lives hours away, she drives to Corona and to Chowchilla on her own dime; she books her own flights to Vacaville, Calif., and emails the rest of the Healing Squad when she finds a particularly low fare.

It’s the special needs of older inmates — men and women — that drive Hongo to continue her work at such great cost.

“This is a vulnerable population without a voice,” she said. “What might be considered elder abuse on the outside is the norm inside, and their voices are not being heard.”

“We rarely have the chance to laugh and be ourselves in this environment. This was like stolen hours. Come back!” wrote a 64-year-old inmate who’s been incarcerated for 22 years.

“Please come back. I feel at peace today because of you!” wrote a 54-year-old inmate who’s been imprisoned for nearly 10 years.

“Come back,” they all write, even the ones who don’t like art, who can’t draw, who never say a word during the sessions. “Come back.”

Wheeling the teal-colored cart behind her, over the uneven sidewalks where the ladies walk, past a gopher hole that reveals, for the briefest of seconds, a curious little golden head, Hongo goes on.

She thinks about all of the moving parts needed to get another round of art therapy courses approved, funded and scheduled. She thinks about the long drive home and some new leads that she gathered to launch a similar program with older male inmates who had been shipped from an already-overcrowded prison up north.

She thinks about how, in less than 10 minutes, she will retrieve her driver’s license from the heavily secured front desk and walk out to her car, where she has left her purse and all her personal belongings — and how, even now, only a few feet away from the entrance of the prison, she is already miles farther than that, so removed are the enclosed lives of the women who are serving time here.

As she always does, Hongo goes over the day’s session and thinks about what went well and what didn’t, about the smiles and the laughter and the genuinely moving stories that emerged from so many women who, if you saw them, you would think they looked just like your mother, your grandmother, your co-worker, your friend.

But it’s a start.

Hongo thinks about the woman who took both her art project and her friend’s to send to “her babies” and how she held it with so much care, so much tenderness, that you would have thought it was something enormously valuable. You would have thought that the paper, the colored pencils, the stickers, the memories and care to put it all together was worth everything in the world or more.