One of USC’s most decorated faculty members has received the highest honor bestowed by the United States for scientific innovation.

President Barack Obama presented Solomon Golomb, University Professor and Distinguished Professor of Electrical Engineering and Mathematics, with the National Medal of Science for his advances in mathematics and communications at an awards ceremony held at the White House.

Obama described the ceremony as the biggest “collection of brainpower that we’ve had under this roof for a long time.”

“If there’s one idea that sets this country apart, one idea that makes us different from every other nation on Earth, it’s that here in America success does not depend on where you were born or what your last name is,” Obama said, “success depends on the ideas that you can dream up, the possibilities that you envision and the hard work — the blood, sweat and tears — that you’re willing to put in to make them real.

“Today it’s clearer than ever that our future as a nation depends on keeping that spirit of curiosity and innovation alive in our time. These honorees are at the forefront of that mission. Thanks to the sacrifices they’ve made, the chances they’ve taken — the gallons of coffee they’ve consumed — we now have batteries that power everything from cell phones to electric cars; we have a map of the human genome; new ways to produce renewable energy; we’re learning to grow organs in the lab and better understand what’s happening in our deepest oceans. And if that’s not enough, the people on this stage are also going to be responsible for devising a formula to tame fizzy hair as well as inspiring the game Tetris,” Obama said, ending on a reference to Golomb’s “polyominos”— geometric figures formed by joining squares to one another — which were the inspiration for the classic video game.

“Sol Golomb is such a deserving recipient of this tremendously prestigious honor,” said USC President C. L. Max Nikias. “His many contributions to mathematics and engineering span more than five decades, and his mathematical coding schemes have advanced a number of important projects, including the imagery we received from Mars. USC is so proud to have been Professor Golomb’s academic home all these years.”

USC Viterbi Dean Yannis C. Yortsos said: “Sol Golomb is the quintessence of USC Viterbi. He symbolizes what is best in mathematics and its application to engineering and other disciplines. He has contributed mightily to the school’s impressive ascent in the last several decades.

“We are very proud of his distinctions and achievements and celebrate with him his triumphs in science and engineering.”

The official citation given to Golomb, holder of the Andrew and Erna Viterbi Chair in Communications, praises his work on shift register sequences, random-looking sequences of zeros and ones that have important, though hidden, mathematical structures that make them useful in a variety of applications — from radar to cellphone systems to space communications.

“My research has always been directed by working on problems that I found interesting and challenging, and that I believed I had a chance to solve,” said Golomb, who recently completed his 50th year of teaching at USC. “I have never thought about receiving awards for my work, but it is always a pleasant surprise when they occur.”

Golomb, who has joint appointments at the USC Viterbi School of Engineering and the USC Dornsife College of Letters, Arts and Sciences, was among 12 scientists and engineers so honored by the president this year. He joins the rarefied ranks of about 400 individuals who have received the award since John F. Kennedy in 1963 bestowed the first National Medal of Science on famed aerospace engineer Theodore von Kármán.

Also at today’s ceremony, Rangaswamy Srinivasan PhD ’56 of IBM was presented with the National Medal of Technology. 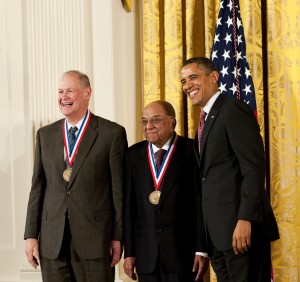 “It is most gratifying to recall that the work I did at USC Dornsife on the chemistry of proteins for my PhD thesis under the supervision of Professor Sidney W. Benson was the source of my inspiration 25 years later to study the interaction of animal tissue with the pulsed radiation from an ultraviolet, excimer laser,” Srinivasan said.

“On that day in November 1981, I was amazed to find that the tissue was not ‘zapped’ as was the expectation among the laser scientists but smoothly etched away, layer by layer, to leave a microscopic channel,” he added. “It took another 15 years before these observations would be developed as a medically acceptable surgical technique for the reshaping of the human cornea. This is the process that is known today in all the developed countries as LASIK eye surgery.”

By receiving the National Medal of Science, Golomb follows in the footsteps of Andrew Viterbi PhD ’62, the namesake of USC Viterbi.

Golomb earned his BA at Johns Hopkins University, completing a four-year degree program in 21 months and the day before his 19th birthday. After completing his PhD in mathematics at Harvard University, Golomb spent a year in Norway as a Fulbright fellow and then returned to the United States to work at the Jet Propulsion Laboratory. In 1963, he took a job at USC.

Golomb said he came here because “I believed that at USC I had a chance to make a difference and to help it achieve its potential. And I stayed because there has been steady progress on this path — in fact, more than I could have imagined 50 years ago.”

The announcement of Golomb’s new accolade follows closely upon his receipt of the Sigma Xi William Procter Prize for Scientific Achievement and his selection as a member of the inaugural class of fellows of the American Mathematical Society.

Golomb attributes his success to taking a practical approach to abstract — or “pure” — mathematics.

“My professors at Harvard took great pride in claiming that the subjects they were teaching were so ‘pure’ that they had no possible practical applications,” he said. “My own approach to studying even the most abstract areas of mathematics was always to have one or more specific instances in mind.”

The areas of mathematics that held Golomb’s fascination turned out to have highly practical applications for the emerging digital world. Once modern computing was unlocked by the invention of the transistor, Golomb’s expertise in “coded communications” and abstract mathematics put him very much in demand.

“It helped that I always tried to think of the applications in the engineering context — and I was always willing to learn enough of the engineering application to be able to do this — so that whatever solutions I came up with made practical sense,” he said. “Over time, I gained enough of a reputation that people I had never met sought me out with interesting practical problems that I had the ability to solve.”

When Golomb began his career 60 years ago, communications engineering was in its nascent stages. Now, he said, the “easy” problems have long since been solved.

Cellphones and the Internet have transformed society, creating their own new challenges. Still pushing the boundaries of science at USC, Golomb now addresses questions related to multiuser communications, secure communications and cryptography.

“I continue to work on ‘old’ problems that have so far resisted attempts at solution, as well as the many new problems generated by the explosion in communications applications,” Golomb said.