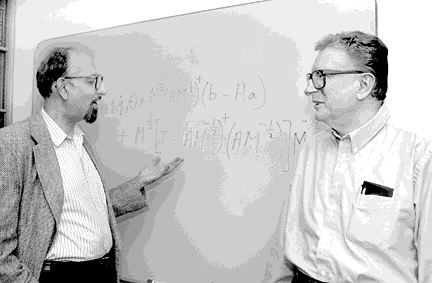 Two USC professors have solved a fundamental problem in analytical mechanics that has eluded some of the world’s greatest mathematical minds for more than 200 years.

But Firdaus Udwadia and Robert Kalaba said they aren’t sure how others will use their new mathematical tool. The two have spent 15 years wrestling with how mathematically to express the motions of constrained mechanical systems.

The researchers said planets moving around the sun are examples of objects in unconstrained motion, while the movement of the tip of a fully articulated robotic arm is an example of constrained movement, for which it is very difficult to write an accurate equation.

“I can see applications in biomechanics and robotics where engineers need mathematical models that can accurately duplicate complex movements of the human body,” said Kalaba, professor of biomedical engineering, electrical engineering and economics. “However, we can’t predict where other researchers in other fields will go. We have opened up the traditional boundaries of mechanics.”

Udwadia is a professor of civil engineering, aerospace and mechanical engineering and mathematics.

Within constrained motion, said Kalaba, either the forces of constraint do work, or they do not.

“The breakthrough here is that we show how to handle the ‘do not’ case in a straightforward manner.”

When writing equations to describe motion, mathematicians have long followed a principle named for the Frenchman who formulated it in 1743, Jean le Rond D’Alembert. It assumes that the forces of constraint do no work. When French physicist Joseph Louis Lagrange wrote the classic Mechanique Analytique (Analytical Mechanics) in 1787, it included the D’Alembert principle.

“Lagrange was a genius, and his simple assumption works so well most of the time,” said Udwadia, “but it doesn’t work all the time.”

Some of the motions for which D’Alembert’s principle doesn’t work are a pendulum, a wheel rolling on a rough surface, or sliding friction. The lack of a better mathematical understanding of constrained motion may seem unimportant because engineers are still able to create lots of things with constrained motion systems.

“We can build cars, although we can’t write an accurate equation for a wheel rolling across a flat surface. The Romans built arches and bridges without truly understanding them,” said Udwadia. He points out that Newton’s laws of motion almost went unpublished – until someone finally decided that they might be useful for aiming cannonballs.

Accurate mathematical models are an important predictive tool, he added.

“For two hundred years, all of mechanics has been based on an underlying assumption that isn’t true for many situations,” said Udwadia. “How can you predict when the model isn’t accurate?”

The deeper understanding that comes with the accurate mathematical representation of something in Nature becomes more important as the scope and complexity of the science increases.

“People were aiming cannonballs – and arrows and rocks – for thousands of years before Newton, but without Newton’s laws, we would not have been able to go to the moon,” said Udwadia.

The methods Udwadia and Kalaba used to begin to express constrained motion in mathematical terms were probably similar to those used by academics at the time of D’Alembert and Lagrange.

“Once or twice a week, we sat around and talked about mechanics,” said Udwadia. “We hardly ever wrote anything down or even used a blackboard. We talked until we started to understand.”

Constrained or Unconstrained, That Is the Equation