If you live in Los Angeles, you spend far too much time stuck in traffic. Cyrus Shahabi wants to help.

Shahabi, professor of computer science and electrical engineering at the USC Viterbi School of Engineering and director of the Integrated Media Systems Center (IMSC) based at the school, is developing a smartphone app that will allow users to tap into the endless reams of traffic data gathered countywide to help them chart the fastest course to their destination.

“This is kind of like a professional driver who knows LA,” Shahabi said during a presentation on Jan. 29 at “GLIMPSE: A Digital Showcase,” a daylong USC event that presented timely technologies across the university. He plans on starting a company to fine-tune and promote the app within a matter of weeks.

Traffic represents an annual $87.2 billion drain on the national economy, according to the Texas Transportation Institute’s 2009 Annual Urban Mobility Report. Last year, traffic data provider INRIX named Los Angeles the second-worst city for traffic in the nation, with drivers wasting an average of 56 hours per year stuck in traffic.

Meanwhile, it is one of the most continuously studied problems in LA County, which has roughly 4,300 sensors monitoring traffic speed and volume on highways alone. 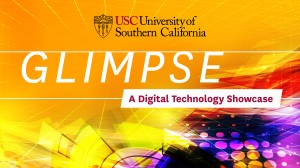 Shahabi and his team decided to tap into the wealth of raw data available about traffic and find ways to crunch it into a useful format. Understanding and utilizing so-called “big data” is a core mission for the IMSC, which was started in 1996 by now-USC President C. L. Max Nikias as an National Sceince Foundation-funded research center but has since become completely self-sufficient.

Through a deal with the LA Metropolitan Transportation Authority (Metro), IMSC gained access to the massive amounts of data gathered by the Regional Integration of Intelligent Transportation Systems (RIITS), a network of agencies throughout the county.

If, for example, a two-car accident occurs on the 134 freeway just west of Glendale at 4 p.m. on a Tuesday, chances are really good that Shahabi’s team already has traffic data gathered from a similar accident that occurred in the same place at the same time of day.

Data from that previous event allows their program to predict how this latest accident is likely to affect current traffic patterns countywide and adjust recommended routes accordingly in real time.

“That’s one of the promises of big data,” Shahabi said. “Using actual, real-world data to make decisions instead of models and simulations.”

USC scientists may have solved the storage problem that has long slowed the spread of renewables.

Fighting traffic with information — lots of it