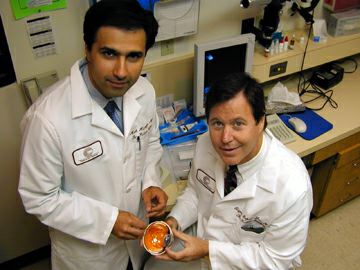 Mark Humayun (left) and Eugene de Juan, Jr., display a model of an eye and a component of the retinal prosthesis they have developed that may someday restore sight to those with degenerative diseases of the retina such as macular degeneration.

Internationally recognized ophthalmologists Eugene de Juan, Jr., and Mark Humayun have joined the faculty of the Doheny Eye Institute and the Keck School of Medicine of USC.

Pioneers in many areas of vision research and treatment, de Juan and Humayun are perhaps best known for the invention and development of an intraocular retinal prosthesis, or “eye chip,” which may be able to restore sight to people with degenerative diseases of the retina such as retinitis pigmentosa and age-related macular degeneration. The team is also behind the development of a new microsurgical technique known as macular translocation, which is designed to treat patients suffering from macular degeneration, a blinding disease of the retina.

De Juan was most recently the Joseph E. Green Professor of Ophthalmology at the Wilmer Eye Institute of Johns Hopkins University School of Medicine. He will be CEO of a newly established Retina Institute at the Doheny Eye Institute (see related story, page 3). Humayun, who will be the associate director of research at The Retina Institute, was most recently an associate professor of ophthalmology at the Wilmer.

The Retina Institute, explained de Juan, will focus on the type of translational research typical of the Keck School of Medicine.

“We found USC as a university to be very forward-thinking and flexible,” said Humayun. “Because of this, it has a unique environment for medical research and the application of that research to develop new products and services for patients. In particular, the Doheny Eye Institute and the Alfred E. Mann Institute for Biomedical Research provide an unparalleled combination that will help The Retina Institute to develop new therapies for eye diseases and in particular retinal diseases.”

The addition of de Juan and Humayun to the Keck School and the Doheny will open new avenues of research and treatment for retinal disease, said Stephen J. Ryan, dean of the Keck School. “We are all excited to have Gene and Mark and their team join us to develop and lead The Retina Institute. I have every confidence that they will make important contributions to understanding and treating retinal disease, and will fundamentally change our field and improve the outlook for patients with retinal disease throughout the world.”

Added Ronald E. Smith, chair of the Department of Ophthalmology: “The recruitment of Gene de Juan and Mark Humayun and their team from the Wilmer, combined with our existing excellent retina faculty-Tom Chang, Lawrence Chong, Christine Flaxel and Jennifer Lim-gives us the critical mass of first-rate clinicians, scientists and engineers needed to rapidly advance new treatments of blinding retinal diseases from the laboratory to clinical care of patients.”

De Juan placed the credit elsewhere-on the “foresight, courage and leadership of Dean Ryan and Dr. Smith-along with the Doheny and USC-to entrust us with the responsibility and give us the freedom to concentrate these resources so these goals can be achieved.”

De Juan and Humayun are the sort of men who can achieve ambitious goals.

De Juan, a native of Alabama, believes that the best way to solve medical problems is to live with them.

“If you’re pushing a person in a wheelchair and there’s no wheelchair access, you get a glimpse of the problems they face,” he said. “That’s why, as a retina doctor, I prefer to see the problem cases-the cases that are difficult or impossible. Because it is only through working these cases that I can really understand what the problems are, and how to fix them.”

De Juan’s ophthalmology career has been highlighted by significant contributions in both surgery and clinical research. He is an innovator who has used partnerships with industry to develop new medical treatments.

He is also the inventor of scores of new surgical techniques and devices-including the highly successful retinal translocation surgery, one of the only procedures that can improve vision in patients with macular degeneration-and currently holds 22 patents.

Most recently, at Johns Hopkins and the Wilmer, he established and directed the Microsurgery Advanced Design Laboratory, or MADLAB.

The team assembled in that lab, most of whom will be joining de Juan at USC, has been responsible for more than 100 inventions over the past nine years, he said.

De Juan received his medical degree from the University of South Alabama College of Medicine in 1979, and was a resident at the Wilmer from 1980 to 1983. He spent the next eight years at Duke Universty before returning to Johns Hopkins in 1992.

As a surgeon and biomedical engineer, Humayun can tackle medical problems from all sides. His quest, as an ophthalmologist and retina specialist, has been to find a cure for currently untreatable retinal diseases that cause blindness. To that end, he has made headlines across the country in the past few years as one of the creators of an intraocular retinal prosthesis-the so-called “eye chip”-that shows preliminary but very real promise for restoring sight to people blinded by degenerative retinal diseases.

Medicine comes naturally to Humayun, who hails from a family of physicians. His mother and four of his uncles are physicians. He received his medical training at Duke, where he first met de Juan and began talking with him about developing a retinal prosthesis.

Humayun received his M.D. in 1989, and went on to get a Ph.D. in biomedical engineering from the University of North Carolina at Chapel Hill in 1994.

This merging of his surgical and engineering skills, he says, was essential to the development of the retinal prosthesis.

At Johns Hopkins, Humayun and de Juan continued their earlier discussions on retinal prostheses, eventually teaming up to create their intraocular retinal prosthesis, which uses state-of-the-art microelectronics to give sight back to some of the blind.

To date, they have done preliminary tests on 17 blind patients with retinitis pigmentosa or macular degeneration.

“These were short term studies,” explained Humayun. “We used external electronics, and then removed everything at the end of the test.” Full-scale clinical trials of a chronically implanted prosthesis are expected to begin soon. That prosthesis will be manufactured by the Los Angeles-based Second Sight, founded by Alfred E. Mann, who is also the chairman of the board of directors of the Alfred E. Mann Institute for Biomedical Research at USC.

Joining de Juan and Humayun at the Keck School of Medicine are four of their Hopkins colleagues: