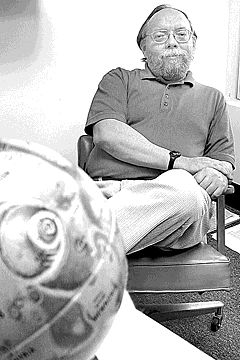 Joseph Miller with a model of Mars, aka the red planet.

Experiments done more than two decades ago on Martian soil collected by Viking landers provided evidence that life might exist on the red planet, according to Joseph Miller, associate professor in the department of cell and neurobiology at the Keck School of Medicine of USC.

Miller recently re-analyzed data collected by the landers and found that something in the collected soil was apparently metabolizing nutrients – and doing so with a distinct biological rhythm that, he said, can only be found in a living cell. Miller presented his findings July 29 at an astrobiology symposium.

The Viking spacecraft were launched from Cape Canaveral in 1975. After traveling for nearly a year, each landed on the planet’s surface. Once there, they performed experiments, including one in which a robotic arm scooped up samples of soil and deposited them in petri dishes with a drop of a nutrient solution that had been labeled with radioactive carbon.

Miller said that any living organisms in the sample would take up the carbon-labeled nutrients and process them, eventually releasing the radioactive carbon in a gas form.

When the original researchers on the Viking project found evidence of gas release, it seemed they had indeed found life on Mars – but others suggested the release might be from chemical reactions with highly reactive compounds.

Unable to prove definitively that the gas was being released by living organisms, NASA let the matter drop.

And so the data sat, more or less undisturbed, until 1999, when Miller saw a figure in a geophysical journal taken from the data from the Viking Lander 2 experiment – a figure that showed highly periodic gas release in the original experiment.

“So I asked NASA if I could look at the data,” Miller said.

But the data were on magnetic tapes “and written in a format so old that the programmers who knew it had died,” Miller said.

Eventually, NASA was able to recover the data and Miller found something remarkable – something, he said, that went unremarked-upon in the original papers.

“The signal itself not only had a circadian rhythm,” said Miller, “but it had a precise circadian rhythm of 24.66 hours – which is particularly significant because it’s the length of a Martian day.”

More specifically, said Miller, the fluctuations in gas emissions seem to be modified by a 2 degrees Celsius fluctuation inside the lander, which in turn reflected not-quite-total shielding from the 50 C fluctuation in temperature that occurs daily on the surface of Mars. Temperature- entrained circadian rhythms, even to a mere 2 C fluctuation, have been observed repeatedly on Earth.

“Along with Mars Observer images that strongly suggest that water flowed on the surface in the recent past, a lot of the necessary characteristics of life are there,” Miller said. “The Viking researchers had an excellent reason to believe they’d discovered life in 1976; I’d say it was a good 75 percent certain. Now, with this discovery, I’d say it’s over 90 percent. And there are a lot of biologists who would agree with me.”

Scientists May Be Right About Life on Mars