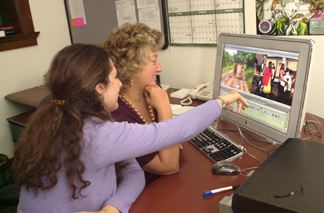 Student Alicia Dwyer shows Doe Mayer a frame from a video Dwyer is editing for Annenberg TV. Dwyer, on her first visit to Africa, filmed some of Mayer’s 26 African multimedia projects. Her documentary will air this year on Annenberg Tv and then be used by Mayer for conference reports.

Women in rural Africa are learning to improve their lives using the same multimedia tools employed by their sisters in developed countries.

It’s all part of a three-year family planning and reproductive-health project called Women Connect! under the direction of USC’s Doe Mayer, the Mary Pickford Professor of Film and Television Production in the USC School of Cinema-TV.

The tools range from such low-end media as posters and brochures to the high-tech Internet.

“What makes this program work is our unique, two-pronged approach using high- and low-end media together,” said Mayer, who holds a joint appointment in the Annenberg School for Communication.

The project is funded by a $1-million grant from the Bill and Melinda Gates Foundation with support from USC’s Annenberg Center for Communication.

Mayer cites an example of the kinds of problems the project seeks to address: the plight of one small Ugandan girl, aged 12.

“By tribal tradition, when the king takes a bride, another young girl is taken out of school, put in a separate house and kept isolated as a virginal symbol of the king’s marriage,” Mayer said.

An international campaign over the Internet, fueled by an African women’s organization, “convinced the king to change this practice,” Mayer said. While this case wasn’t part of Women Connect’s work, “It is a pure example of how women’s groups can use e-mail and listserves to galvanize public pressure – the sort of thing we tried to teach,” she said.

Women Connect has done such things as help a Zimbabwe women’s group set up an Internet café. It helped disabled women living in an isolated Zambian village develop a strategy to distribute information on critical health issues, such as HIV and AIDS. In Uganda, Women Connect provided money for women to develop Internet research skills so they could distribute up-to-date health information to rural women.

Before Women Connect, “our campaign had largely been one where we talked to ourselves as women or to the already converted,” said the director of the Uganda Women’s Network, Sheila Kawamara. “We [now] realize that we have pointed fingers and not understood people’s problems and realities. There is a strong and urgent need to look at issues from the eyes of the people we are trying to reach.”

When groups work together with a plan, Mayer said, “They can successfully disseminate health-oriented messages – like how to have safe sex and how to protect themselves from HIV/AIDS. As the message is passed along from woman to woman, they make life better for their communities, themselves and their children.”

Mayer’s team encouraged women to research public opinion to find out what people think and what messages might persuade others to change their behavior. Then they targeted audiences and helped design communication campaigns using posters, radio, theater, brochures, T-shirts and jingles.

“We taught them to use the Internet to gather the research needed to develop and back up their messages, to lobby for policy changes and to link with other groups and donors,” Mayer said. “They determined for themselves what they needed to say – we improved their ability to spread the word.”

Although the project was designed to strengthen nonprofit groups, individual women sometimes benefited as well. At the Internet café in Zimbabwe, a woman who cleaned floors in the café learned how to surf the Net, becoming so adept she taught those same skills to other women – and earned a raise and a promotion.

Although Gates Foundation funding has run out, the work goes on as newly trained leaders in Africa reach out to other women.

Elizabeth Daley, dean of cinema-TV and director of the Annenberg Center, observed that the project combines old and new technologies and methods in the use of media to effect social change.

“We are particularly pleased that the project’s innovative mix of media strategies and research links the various disciplines of the Annenberg Center, the School of Cinema-Television and the Annenberg School for Communication,” she said.

Is L.A. like a city built on Jell-O? Chukwuebuka Nweke may have the answers

The new USC Viterbi assistant professor seeks to make our cities more resilient in the face of natural disasters.

Lesley Omenge’s life journey has taken her across oceans and cultures. Immersing herself in the customs of others, her destination is somewhere on the other side of borders.