USC scientists who track Internet outages throughout the world noted a spike due to Hurricane Sandy, with almost twice as much of the Internet down in the United States as usual.

Previous research by this team has shown that on any given day, about 0.3 percent of the Internet is down for one reason or another. Just before Hurricane Sandy hit the East Coast in late October, that number was around 0.2 percent in the United States (pretty good, by global standards), but once the storm made landfall, it jumped to 0.43 percent and took about four days to return to normal, according to a new report by scientists at the Information Sciences Institute (ISI) at the USC Viterbi School of Engineering.

“On a national scale, the amount of outage is small, showing how robust the Internet is. However, this significant increase in outages shows the large impact Sandy had on our national infrastructure,” said John Heidemann, who led the team that tracked and analyzed the data. Heidemann is a research professor of computer science and project leader in the ISI’s computer networks division.

Heidemann worked with graduate student Lin Quan and research staff member Yuri Pradkin, both also from ISI, sending tiny packets of data known as “pings” to networks and waiting for “echoes,” or responses. Though some networks — those with a firewall — will not respond to pings, this method has been shown to provide a statistically reasonable picture of when parts of the Internet are active or down. 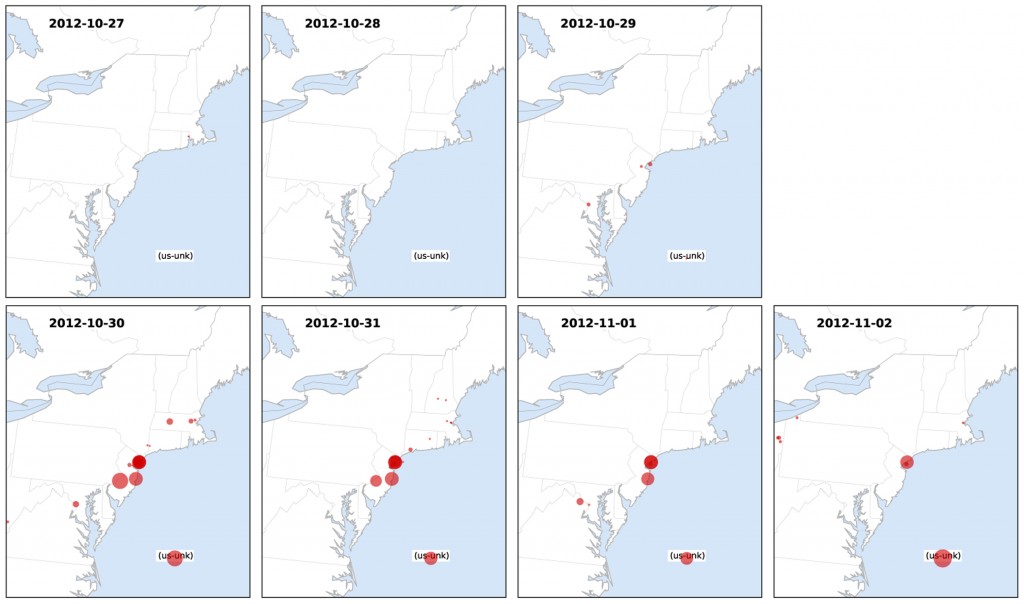 Geographic location of observed outages in the Northeastern U.S., by day (Image/John Heidemann)

The team, which was also able to pinpoint where the outages were occurring, noted a spike in outages in New Jersey and New York after Sandy made landfall.

Their research was published as a technical report on the ISI webpage on Dec. 17, and the raw data will be made available to other scientists who would like to analyze it.

The data is not yet specific enough to say exactly how many individuals were affected by the outage, but it does provide solid information about the scale and location of outages, which could inform Internet service providers on how best to allocate resources to respond to natural disasters.

“Our work measures the virtual world to peer into the physical,” Heidemann said. “We are working to improve the coverage of our techniques to provide a nearly real-time view of outages across the entire Internet. We hope that our approach can help first responders quickly understand the scope of evolving natural disasters.”

The research was funded by the U.S. Department of Homeland Security’s Science and Technology Directorate.