USC Village, an ambitious retail and student housing project that will change the face of the university and of South Los Angeles, won approval from the Los Angeles City Council today.

The historic unanimous vote clears the way for USC to redevelop large parcels of university-owned land over at least the next 20 years. The council’s approval of the Specific Plan gives the university permission to build on its land north and east of campus within the criteria specified in the plan.

By far the biggest project is the redevelopment of University Village, currently a small and dated shopping center across from campus on Jefferson Boulevard. The new USC Village will create a town square for the university and the community, with more than 2 million square feet of community-serving retail, student housing, hotel and academic space.

Most importantly for neighbors and students, the USC Village will feature a full-service grocery store, many shops and restaurants, and up to 3,000 new student housing beds (in the first phase, out of a total of 4,038 over 20 years), which are expected to relieve pressure on rental units in the surrounding area.

“Not only will the USC Village profoundly enrich our University Park Campus, it will be a tremendous boon for our surrounding neighborhoods, and for all of Los Angeles,” said USC President C. L. Max Nikias. “We are all tremendously grateful to Mayor Antonio Villaraigosa and the members of the Los Angeles City Council for their outstanding leadership in moving this landmark project forward.”

The project and related construction in the university’s Specific Plan area are expected to create 12,000 jobs — 8,000 of them permanent — from a university that is already the largest private employer in Los Angeles.

The project does not involve any public land, public subsidies or public funds.

“As someone who remembers South Los Angeles when it was thriving economically, I am enormously proud to be part of a university that will bring thousands of good jobs, badly needed shops and restaurants, and a new center of community life to our neighborhood,” said Thomas S. Sayles, senior vice president for University Relations.

Sayles thanked council members, labor, business and community groups, and the many residents who supported the project.

“The beauty of this process is that we all came together,” Sayles said. “We came together for the betterment of our neighborhood.” 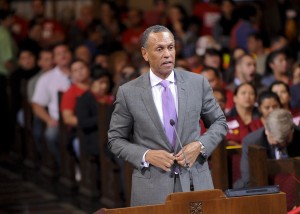 As part of its long-standing commitment to the community, USC plans to fill at least 30 percent of the jobs locally, with at least 10 percent going to members of disadvantaged groups.

Council members praised the scope and economic impact of the project, one of the largest in the history of South Los Angeles.

“This is an exciting moment because it means thousands of new jobs for Los Angeles city residents,” said Councilwoman Jan Perry ’77, MPA ’81 , who moved the motion to approve the USC Village. “This project will also bring quality retail options to a community that still lacks grocery stores, movie theaters, sit-down restaurants.

“We have all worked very hard for the last four years to get to this point. It makes me enormously proud at the progress that we have made,” she added.

Planning for the project began in 2009 after university leaders adopted a new master plan and began discussing options for the University Village property.

“We should build an integrated village that has mixed uses, that is extremely vibrant and creates a college-town feeling for USC,” she suggested at the time. “The project grew and evolved from there.”

A public phase of hearings and open houses began last October and continued through the public comment period of today’s City Council session. More than 500 community supporters attended at least one hearing and voiced their approval of the project.

“This is a giant leap for a better future for the community,” said 37-year University Park neighbor Umberto Ayuso during the public comment period preceding the vote.

Many supporters credited the university’s history of community engagement for its success in passing the kind of bold development project that could have attracted controversy and animosity in other locations.

In addition, the university is recognized nationally for its long record of community outreach, which helped it to earn Time magazine’s College of the Year distinction in 2000.

An artist, a community and a well of inspiration

Nearly 3 years since start of pandemic, USC Dornsife report shows how life in L.A. is changing

Overall life satisfaction continues to decline and racial discrimination against Asian and Black Angelenos remains high, but fewer people are planning to leave the county, according to a new LABarometer livability and affordability survey.