Elizabeth Garrett, USC provost and senior vice president for academic affairs, has announced the appointment of Scott Fraser as Provost Professor of Biological Sciences and Biomedical Engineering and the Director of Science Initiatives. 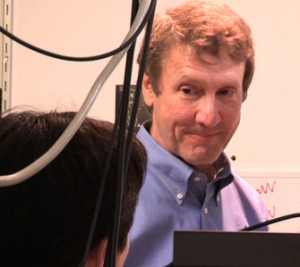 The renowned biologist arrives from the California Institute of Technology (Caltech), where he was the Anna L. Rosen Professor of Biology and professor of engineering and applied science. At Caltech, he founded the Biological Imaging Center (BIC) in the Beckman Institute.

For 22 years, the center has brought together biologists, engineers and chemists to build new technologies for imaging biological structures and function. Projects at the center address questions ranging from embryonic development to neuroscience. In each of the BIC’s varied research focuses, the common theme is the use of advanced imaging tools to follow events as they take place inside an intact organism.

The technologies have allowed Fraser and his team to expand into the biomedical realm, where they work toward important biomedical devices and treatments in areas ranging from eye disease to cancer.

Fraser also co-founded the Caltech Brain Imaging Center — which he directed until 2009 — the Kavli Nanoscience Institute and the Rosen Center for Biological Engineering.

Garrett said that USC’s Faculty Hiring Initiative in the Sciences and Engineering challenges faculty to recruit exceptional scholars like Fraser, who conduct research in these dynamic fields where discovery and innovation converge.

“As the world’s preeminent developer of new biomedical imaging techniques and as an experienced leader in facilitating the translation of this work from the lab to practical application, Professor Fraser’s arrival at USC underscores our success in advancing a vibrant culture of research,” Garrett said.

Steve A. Kay, dean of the USC Dornsife College of Letters, Arts and Sciences, lauded Fraser and his work.

“I have known Scott Fraser and his groundbreaking work for more than 20 years,” Kay said. “His world-leading expertise in precision measurements of live cells and organisms epitomizes our push into emerging areas of quantitative biology.”

Fraser earned his bachelor’s degree from Harvey Mudd College in Claremont, Calif., and his PhD with distinction in biophysics from Johns Hopkins University in Baltimore. He joined the faculty of the Department of Physiology and Biophysics at the University of California, Irvine, where he rose through the ranks from assistant professor to department chair. He joined the Caltech faculty in 1991.

“Our research takes two forms: One is to develop the technologies that let us image biological structure and molecular signals,” Fraser said. “And the other is to use those technologies to get a better understanding of complex events like embryonic development or the changes that take place as diseases processes are under way.”

Fraser’s work is founded on the idea that if scientists can watch development or watch any complex event as it is happening, they can better understand the key interactions and events in a single specimen over time.

“One approach we use is to build new microscopes that let us watch as a heart beats and takes shape from a simple tube to a simple double-chambered heart to something that has the four chambers that we’re more used to,” Fraser said. “As that takes shape, we can watch as the cells interact with one another, as they make the heart valves, as the heart muscle elaborates, and really get an idea of what the key events might be.”

This is an important first step to understanding how heart defects evolve, he noted.

“Right now, we know many of the key signals that are involved in heart development,” Fraser said. “But we don’t fully understand the cells that respond, the cells that give off the signals and the way that the cells collaborate with one another to build structures like hearts or the septum between the different chambers of the heart.”

Early on in his laboratory, Fraser and his team decided to employ some of the tools that are common in a physics or engineering lab in a biology context.

“So, [we are] building new pieces of apparatus that let us take better measurements and then using those to get a better understanding and motivate the next instrument,” Fraser said. “Over the years, we’ve innovated new approaches to use basic light microscopes to watch cells as they do their normal function. We’ve innovated ways to label the cells so that they can be followed while they are undergoing development, and then we’ve made a number of different innovations in laser-scanning microscopy that allow us to follow multiple labels inside of embryos or inside of other tissues as they do their normal biological function.”

Fraser seeks to better understand the basic behaviors of cells involved in normal development or in wound healing or in disease processes.

“This lets us get a better idea of how regenerative medicine could be done better,” Fraser said. “If we know the rules and the interactions that cells follow to pattern an embryonic heart valve, for example, we’re hoping we might be able to tap into some of those signals and interactions to help heart valves rebuild themselves.”

Similarly, in problems like eye disease, Fraser uses the same imaging tools to look into people’s eyes as they get older and find the earliest signs of the disease processes that could end up costing them their vision.

“The goal is to start treatment for retinal degenerations, for example,” he said, “before any noticeable symptoms have even come about.”

Fraser said he was drawn to USC and USC Dornsife in particular because of the wide range of technologies and disciplines that are represented within just a short walk.

“By being at USC, we’re able to draw on the engineers, the physicists and the chemists that will let us build the next generation of technologies that we think will have huge applications, both in basic science and in clinical research and clinical practice.”

Another huge advantage to coming to USC was Fraser’s desire to interact on a day-to-day basis with excellent clinicians and basic researchers.

“USC Dornsife offers us the physics, chemistry and biology community that we need for our basic biological research,” he said. “And interaction with Children’s Hospital and with the Keck School of Medicine of USC offers us a direct tie-in to translate our basic science research to potential clinical application.”

He is energized about beginning his new post at USC.

“What excites me most about my research,” he said, “is when we obtain findings that others have declared are impossible to obtain.”