The mystery of how dinosaurs first began to fly may have finally been cracked by a USC-led team of scientists whose groundbreaking study has been honored by the Society of Vertebrate Paleontology (SVP).

The pioneering research by Justin Hall, doctoral student in integrated and evolutionary biology at the USC Dornsife College of Letters, Arts and Sciences, and Michael Habib, assistant professor in cellular and neural biology at the Keck School of Medicine of USC, solves the long-standing puzzle of how the crow-sized, four-winged dinosaur used its feathered hind legs to perform complex airborne maneuvers, allowing it to hunt prey or dodge obstacles nearly 130 million years ago. 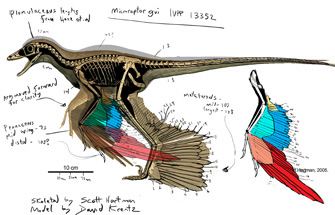 Hall and Habib’s abstract was among the studies selected by the SVP from a pool of 800 entries. The top 10 were presented to members and leading science media at the 72nd annual meeting of the SVP held Oct. 17-20 in Raleigh, N.C.

Hall and Habib’s research was conducted in collaboration with the Natural History Museum of Los Angeles County and David Hone of Queen Mary, University of London in the United Kingdom.

“This study provides a plausible mechanism by which dinosaurs that otherwise have strongly Velociraptor-like bodies could take to the air and control themselves while in flight,” Hall said, referring to the genus of dinosaur most familiar to the public from its prominence in Jurassic Park. “Obviously, crashing is bad for the long-term health of the animal, but until now we had little idea how the earliest flying dinosaurs avoided such catastrophes given their rather simple wing structure.”

When fossils of M. gui were first discovered in northeastern China in 2003, scientists were excited by evidence that it not only had extensive lift-generating feathers on its arms, thus forming a set of wings, but that — unexpectedly for a vertebrate — it also possessed surprisingly long feathers on each leg, effectively forming a pair of “hind-wings.”

Because dinosaurs are generally accepted by paleontologists to be the ancestors of modern birds, the discovery of M. gui’s hind-wings sparked a debate about their importance in the evolution of birds from Velociraptor-like ancestors.

Until Hall and Habib’s study, the prevalent, albeit much-disputed, theory maintained that the small dinosaur glided between trees like a biplane. However, as critics pointed out, to do this the creature would have had to be a contortionist, possessing the ability to hold its hind legs out at a 90-degree angle to its body.

“The anatomical problem with the previous model is that essentially the animal was doing the splits and would have nearly had to dislocate its hips to get its legs into that position,” Hall said. “As anatomy instructors, Mike and I both knew it was physically impossible for the animal to have done that.

“However, there wasn’t an alternative until we raised this new model, which keeps the legs directly under the body in a way that is consistent with the posture we see in all known dinosaurs, in birds and also in the original specimen of this type of animal.” 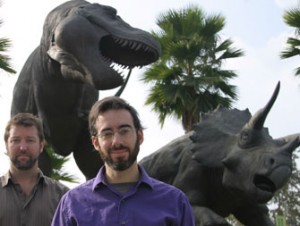 Hall and Habib found additional reason to discount the original model when they studied whether it would improve M. gui’s performance in flight.

“It turned out it made the animal worse both at flying and gliding than if it had used its front wings alone,” Hall said.

“What is revolutionary is that we combined our knowledge of anatomy with an understanding of the aerodynamics of how animals actually fly,” Hall added.

Their research shows that the forest-dwelling M. gui would have been highly agile as it deployed its hind-wings to exercise deft control over tight turns used to dodge branches and hunt prey as it glided through prehistoric forests. Indeed, M. gui hind-wings improved its ability to “steer” to such an extent that it was able to turn twice as fast as a two-winged animal.

“For the first time, we appear to have a solid answer to the mystery of dinosaur hind-wings, as well as the function of the tail-feather fan,” Habib said. “In the process, we have solved a major problem in the evolution of dinosaur flight — the problem of control.”

Philip Currie, professor and holder of the Canada Research Chair in dinosaur paleobiology at the University of Alberta, Canada, said: “Ever since the discovery of the first feathered dinosaur fossil in 1996, debate about the origins and mechanisms of powered avian flight has become increasingly contentious. In this new, elegant study combining analyses of aerodynamic capabilities and phylogenetic relationships, the inevitable conclusion is that dinosaurs were ‘experimenting’ with different body plans as they ‘learned’ to fly.”

The implications of Hall and Habib’s research extend to the evolution of modern bird flight, including eagles.

“People have been observing eagles sticking their legs straight out while making turns for thousands of years,” Habib said. “We may have figured out some detail that they are using that helps them be more maneuverable.”

The study will also allow scientists to generate predictions about the missing parts of an animal for which only partial fossil records exist.

“For example, we only have fossil evidence of the wing and tail of another theropod dinosaur related to M. gui,” Habib said. “Now we can generate predictions for what the front wing and tail of this animal probably looked like.”

These predictions about the fossil record could also have interesting side implications for biological systems that are increasingly modeled for understanding bio-inspired robotics, among other engineered systems.

Hall paid tribute to USC Dornsife’s strong focus on an interdisciplinary approach to research, which allowed him and others to develop a collaboration with the Natural History Museum. Hall’s co-advisers on the study were Jill McNitt-Grey, professor of biological sciences and biomedical engineering at USC Dornsife, and Luis Chiappe, curator and director of the Dinosaur Institute at the Natural History Museum, who was a co-author of the study. 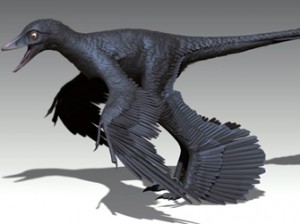 “We are excited to be at the forefront of this interdisciplinary approach by pushing the boundaries of what can be achieved in a close, working collaboration between a university and a museum,” Hall said.

“It has enabled us to bring people together from different perspectives. Mike [Habib] and I come from the anatomical and mechanical viewpoints, while Luis [Chiappe] brings an expertise on fossil birds and how they relate to each other,” he noted. “We also had an opportunity to develop an international collaboration by working on some of the Chinese specimens.”

The annual SVP meeting was attended by many of the most prestigious publications in the field, including Science, New Scientist, National Geographic, Scientific American and Science News. Several of the journals have already published articles on the subject, Hall said.

“I grew up a nerdy little kid who read the Scientific American, so that’s one that really hit home for me,” Hall said. “Our research has been fantastically well-received. It’s wonderful as a scientist to get that sort of validation where the public and other scientists think what you are doing is interesting. This is so exciting, and it’s such a huge opportunity for us.

“Both Mike and I really love teaching and having our research selected by the SVP as something they want to feature as an example of why you should care about paleontology and ancient animals is a huge honor,” he added. “It’s also a big responsibility, but most of all, it’s a great opportunity for us to be ambassadors for science.”

“At a foot in length,” says Luis Chiappe, “the amazing tail feathers of Changyuraptor are by far the longest of any feathered dinosaur.”

A lifelong fascination with dinosaurs

Grad student focuses on the evolution of a USC biology program.

How did dinosaurs fly? These scientists may have cracked the case