As a first-generation college student pursuing a degree in geological sciences, Yadira Ibarra felt like the proverbial stranger in a strange land.

At Brown University, there were few women studying earth sciences. And even fewer who were Latina. It wasn’t until she presented her research at a conference held by the Society for Advancement of Chicanos and Native Americans in Science (SACNAS) that she met many Latinas and Latinos studying science.

“For the first time I was meeting peers who grew up in a similar environment as me,” said Ibarra, whose parents migrated from Mexico to Los Angeles. “I was amazed there were so many Latinos who wanted to become scientists.”

Now a geobiology doctoral student at the USC Dornsife College of Letters, Arts and Sciences, Ibarra wants to bolster support for underrepresented minority students in the fields of sciences, technology, engineering and mathematics (STEM). Toward that end, she has helped to create a SACNAS chapter on campus.

The chapter will start by providing a forum for doctoral students from underrepresented groups studying STEM fields to come together, hear about one another’s research and career trajectories, and find peer mentorship, said George Sanchez, USC Dornsife’s vice dean for diversity and strategic initiatives, who spearheaded the effort.

Chapter members will also reach out to underrepresented undergraduates to encourage them to consider doctoral work and careers in science. The members will visit high schools and community colleges, where they will speak to students about futures in science and technology.

“It’s important to note that SACNAS is open to all scientists and is meant to promote diversity in all scientific fields,” Sanchez said. “It’s not only for Chicanos and Native Americans but also promotes diversity for African-Americans, women and first-generation college students — and all other groups that are underrepresented.”

For Ibarra, the 2008 SACNAS conference she attended as a Brown University student also drew her to USC Dornsife. Ibarra attended a session led by William Berelson, professor of earth sciences at USC Dornsife.

“I was fascinated by the research he was doing,” Ibarra recalled. “It was similar to the research that I had been conducting as a major in biology and geology. I realized I could do research in a field that combined both of my interests.”

After hearing more about USC Dornsife’s geobiology program, Ibarra, who was born in Boyle Heights and grew up in East Los Angeles, decided to become a Trojan. 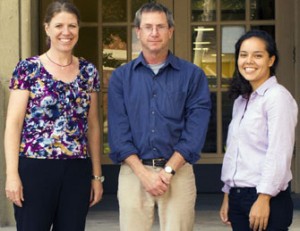 Berelson noted that former earth sciences doctoral student Everett Salas got his department fired up about attending the SACNAS conference, where they met Ibarra.

“For Everett to stand in front of his peers at the conference and explain how he is studying in this area, he opened eyes to the possibilities in the sciences,” Berelson said. “Because geobiology is a very new combination of fields, many don’t really understand what it is. But when these two sciences come together, the interface is where exciting things happen.”

Salas recalled that as an undergraduate at California State Polytechnic University, Pomona, he switched his major five times, bouncing from business to engineering and eventually to biology with plans to become a doctor.

Once Salas finally followed his dream and became a student in the earth sciences doctoral program at USC Dornsife, he had to convince his parents he wouldn’t starve.

“I kept having to explain to my parents,” he said. “ ‘Science? What do you do with that?’ I didn’t have anyone to tell me that this is OK. This route is OK. That you can actually make a living being a scientist.”

To recruit and support minority students interested in the sciences, Salas began working with Sanchez to start a SACNAS chapter on campus. Sanchez, Berelson, Ibarra and Cindy Joseph, who oversees the diversity program for the National Science Foundation’s Center for Dark Energy Biosphere Investigations on campus, brought the effort to fruition.

“The SACNAS conference introduces students to researchers and National Science Foundation officers,” Joseph said. “The SACNAS chapter is a focus point for students on campus to recognize that resources are available to them. It’s a mechanism by which they can receive the help they need to conduct research.”

“The numbers provide an upbeat story that leads directly to why there can now be a SACNAS chapter — there are enough students to support it and maintain it,” Sanchez said. “The chapter will greatly help in recruiting new students to these PhD programs.”

For more information about the SACNAS group, contact Ibarra at sacnas@usc.edu.