University Professor Hanna Damasio, holder of the Dana Dornsife Chair in Neuroscience and professor of psychology and neurology at the USC Dornsife College of Letters, Arts and Sciences, has received a doctora honoris causa from the prestigious Open University of Catalonia (OUC) in Barcelona, Spain.

This honorary degree is the highest academic distinction that the university awards to an individual in recognition of his or her merits and work. 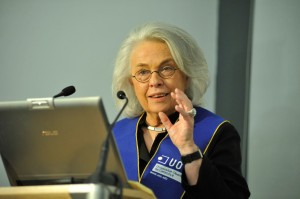 Llorenę Valverde, general secretary of the OUC, noted that Damasio is recognized worldwide as a pioneer in the use of digital imaging technology for the study and diagnosis of brain lesions.

A fellow of the American Academy of Arts and Sciences and the American Neurological Association, Damasio is director of the Dana and David Dornsife Cognitive Neuroscience Imaging Center.

In 1994, Oxford University Press published Damasio’s first brain atlas based on images obtained from computerized axial tomography. This became a basic text in medical schools and research centers throughout the world.

“Hanna Damasio symbolizes the spirit of technological innovation serving research, education and the well-being of individuals, which forms the basis of the scientific and educational work of the Open University of Catalonia,” Valverde said, speaking on behalf of the OUC president.

Manuel Castells, University Professor and holder of the Wallis Annenberg Chair in Communication Technology and Society at USC, called Damasio “one of the most important neuroscientists of our time,” who conceived and put into practice the use of new digital technologies to expand the frontiers of knowledge concerning the human mind.

“Hanna Damasio is an extraordinary scientific innovator who has opened the door for the rigorous study of the living brain, thus allowing us to lift the veil of mystery corresponding to the question of what it means to be human,” Castells said during a ceremony in October at the OUC.

Castells called Damasio’s scientific output “nothing short of extraordinary, not only in its quality but also in its quantity.”

In addition to her two fundamental books and co-authored books, she has had 213 articles published in major scientific journals, such as Nature, Science, Brain and The Journal of Neuroscience, as well as dozens of peer-reviewed research abstracts.

Born in Portugal, Damasio earned her medical degree from the University of Lisbon and completed postgraduate work at Columbia University in New York and the National Hospital for Nervous Diseases in London. A professor at the University of Iowa for many years, she joined USC Dornsife in 2005.

In Damasio’s acceptance speech, the neuroscientist pointed out two major developments after World War II: the invention of the computer, which opened the way for the digital revolution, and the discovery of the structure of DNA, which paved the way for modern biology.

“The last quarter of the 20th century, however, belongs to a quieter development whose scale and consequences are only now becoming apparent,” Damasio said. “The development had to do with the attempt to understand how the human brain produces mind and behavior, an effort known as cognitive neuroscience.”

The cognitive neuroscience revolution did not begin with a spectacular coup similar to the discovery of the DNA structure, she said. Instead it grew slowly, bit by bit, and only picked up speed in the 1990s and early days of the 21st century.

“From my perspective, however, the revolution came just in time because I had the good fortune of witnessing many of its developments, quite closely, and of being involved in their application,” she said. “I have also been fortunate to participate in exciting discoveries that were only possible because of the availability of the new techniques.”

In 1973, computerized X-ray tomography was invented in what became known as CT scanning. This was early in Damasio’s career and the invention changed her outlook and possibilities.

“The dream of studying human neuroanatomy in the living, with considerable precision and in a noninvasive, nonharmful way, had become a reality and the title of one of my books indicates that the dream had come true,” Damasio said.

Today it is possible to peer into human brains using a variety of functional imaging techniques.

“Today, we can even study the connections that neural pathways establish across the brain,” Damasio continued, “the web of connections that link the neural systems whose operation is the secret behind our minds and behavior.”

The Honda Foundation of Japan has announced that its annual Honda Prize, one of the most important international awards for scientific achievement, will go to Antonio Damasio, the David Dornsife Professor of Neuroscience and director of the Brain and Creativity Institute at USC.