The newest building at USC is organized like a brain, with spaces for both rational inquiry and appreciation of the beautiful. It’s a fitting home for a research center that merges the latest advances in neuroscience with ancient questions of what it means to be human: What drives us to create? How do we seek meaning? Where do feelings come from?

Opening Nov. 6 with a ribbon-cutting ceremony and performances, the USC Brain and Creativity Institute (BCI) building is located in the Dornsife Neuroscience Pavilion, which also houses the Dornsife Neuroimaging Center. The building makes the case that artists, theorists and scientists need one another to tackle the biggest questions of human existence.

“Poets and novelists have been after these same questions in all of the time we have been on earth,” said neuroscientist Antonio Damasio, director of the BCI. “As scientists, we’re trying to understand the same deep issues.”

The lead gift for the building came from longtime university supporters Dana and David Dornsife. As the architect-of-record, the Los Angeles-based Perkins+Will carved the BCI out of space between existing structures. The design of the institute reflects the context of the university while creating a dynamic new research environment that advances teaching and discovery.

“Our position was that we have great faculty, we have great students and we have great postdocs,” said USC Trustee David Dornsife ’65 during the opening ceremony. “We knew there was something exciting happening here at the Brain and Creativity Institute, but we needed a building to house it in. The stars were beginning to get in alignment.”

Dana Dornsife noted that it’s one thing to write a check to build a building.

“But it’s an entirely different experience when you can take a building and turn it into a living and breathing entity,” she said. “And under the leadership of Hanna and Antonio, along with the talent of all of the students and faculty and administration involved in this project, this is now a living and breathing entity. We really look forward to the future developments that come out of the Brain and Creativity Institute.”

USC President C. L. Max Nikias said that in addition to world-class arts performances, the auditorium will accommodate lectures and demonstrations — all contributing to an understanding of the brain.

“The interplay of the neural and mental in memory and emotion, consciousness and creativity, is quite complex,” Nikias said. “However, there is nothing mysterious about the pillars of support behind the Dornsife Neuroscience Pavilion. Dana and David Dornsife are simply passionate about USC.

“Just as neurons fire to create sparks of thought and emotion, their contributions pulsate throughout every corner of our campus, thanks to the USC Dana and David Dornsife College of Letters, Arts and Sciences.”

“We need to engage our fields with fresh approaches and not just add to knowledge in an incremental way, but to synthesize and move toward making a real impact,” he added. “The USC Brain and Creativity Institute, with University Professors Antonio Damasio and Hanna Damasio at the helm, is accomplishing exactly this.”

The 20,000-square-foot building features science labs and performance space side by side, anchored by advanced neuroimaging machines and a world-class concert hall. 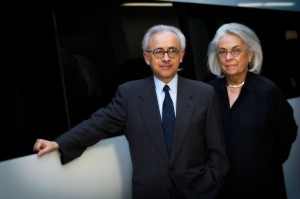 On the left side of the entrance is the dramatic Joyce J. Cammilleri Hall designed by Yasuhisa Toyota, the acoustician also responsible for the concert hall at Walt Disney Concert Hall and the New World Symphony, among other top performance spaces worldwide. Each plank of the hollow stage floor was hand-selected by Toyota to create the perfect swell of sound.

On the right is a different sort of hum: of laboratories, EEG and MRI machines, of high-resolution, real-time brain scans.

“We want students to be confronted with this juxtaposition and to have to ask why these two vastly different spaces were placed side by side,” Antonio Damasio said during the ceremony, which included a tour of the building.

Like any brain, the conduits in the building are the most critical. Laboratories and practice areas are connected by spaces for gathering and solitary contemplation, and by a central glass-enclosed courtyard that spans all three levels. Throughout the building, even in the small hallway behind a stairwell in the basement, are thoughtful selections of modern art.

“We wanted to persuade people to go back and forth across these worlds and to help them see how these worlds interconnect,” said Damasio, USC University Professor and professor of neuroscience and psychology at USC Dornsife. “It’s important for science and the humanities to work together and to do so manifestly.”

The small details and larger organization of the building have been a passion project for the last three years for Damasio, one of the world’s leading practitioners of joining the scientific enterprise with humanistic pursuit, and for Hanna Damasio, another renowned neuroscientist who co-directs the BCI and directs the Dornsife Neuroimaging Center.

Among the BCI’s current research projects is a major collaboration with the Los Angeles Philharmonic. For five years, USC neuroscientists and music educators with the USC Thornton School of Music will track students in the LA Phil’s acclaimed youth orchestra, led by Gustavo Dudamel. The project, which began this fall, starts with students who are about 6 years old and encountering musical training for the first time, and will provide critical data on how intense music training affects brain development in children, as it actually happens. 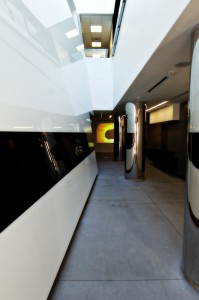 “We should not be studying music without musicians,” Antonio Damasio said. “By the way, explaining why people cry at the opera will not stop them from being moved by the music.”

Other projects from the BCI include research on how the brain processes emotions, such as compassion and gratitude, and how the brain generates feelings of pain, sadness and joy, a project relevant to the understanding of depression and drug addictions.

“By understanding how the brain generates these feelings at the deepest level, we can find medical solutions for the problems they pose,” Antonio Damasio said. “That’s the underlying beauty of having side by side the classic ways of dealing with suffering, as in music or poetry, and the scientific ways of exploring the problem.”

At the same time, researchers with the Dornsife Neuroimaging Center are looking at new modes of imaging the brain and new techniques to study the structures of the brain and thoughts, including a project in collaboration with the USC Viterbi School of Engineering.

In recent years, these advances in technology have moved neuroscience beyond mapping or understanding “brain tubing.” Still, Antonio Damasio cautioned, scientists should be wary of thinking that all mysteries are explainable.

“Ever since the dawn of humanity, we have reflected on our role in the world and our destiny, and what it means to be human,” he said. “We’re joining this traditional strand of inquiry with the world of neuroscience, and we are nowhere near the end of the road.”