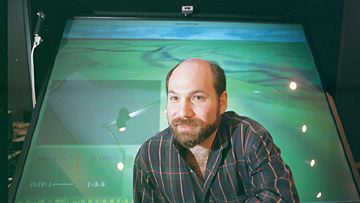 An ambitious national effort to improve the ability of scientists to share applications, scientific instruments and data, as well as collaborate with colleagues across the Internet has roots and a future at USC.

The USC School of Engineering’s Information Sciences Institute will receive $2.1 million from the National Science Foundation as part of a $12.1 million program to develop what is being called “grid computing” technology.

Grid computing is a technology that lets groups collaborate with one another by making it possible to share a wide variety of resources. Using the Internet as basic “wiring,” the Grid lets people share computing, storage, data, programs and other resources just like the electric power grid allows people and power companies to share a power plant. The goal is to allow anyone with a computer to effectively integrate instruments, displays and computational and information resources over a variety of computer platforms.

“Consider a professor teaching a class in environmental engineering who wants his students to gets hands-on experience with environmental monitoring and modeling,” said Carl Kesselman, USC research associate professor of computer science and director of the ISI Center for Grid Technologies. “The technologies that we will deploy for authentication, resource discovery, and so forth will make it possible for these students to call upon national resources as they undertake class projects.”

In recent years Kesselman and Ian Foster, a University of Chicago professor who runs a lab at the Argonne National Laboratory, have been developing basic grid tools and software in a project named Globus.

ISI and Chicago will each receive about $2.1 million from the NSF and will work with the National Center for Supercomputing Applications to create a basic suite of software called “middleware.” Middleware is software that connects two or more otherwise separate applications. This part of the research program will be called the National Middleware Initiative.

The award is the third major endorsement in recent weeks of Kesselman and Foster’s Globus approach:

• On Aug. 2, IBM announced a large-scale effort to support grid computing that will work with Globus and related open-source development communities. The announcement called grid computing “a revolutionary new open-source-based computing model that IBM sees as a critical next step in the evolution of the Internet.”

• On Aug. 27, NSF announced a $10 million grant to create a national virtual “collaboratory” to allow engineers to share equipment, data and research tools in order to create better techniques to safeguard structures against earthquakes. Researchers from several institutions, including the USC School of Engineering, will build the National Network for Earthquake Engineering Simulation, or NEESGrid. It will use Globus technology, and Globus partners will be co-investigators.

The Grids project grant also went to units at UCSD and the University of Wisconsin at Madison. A second team is composed of the information technology association EDUCAUSE and the Southeastern Universities Research Association.

More information on Globus can be found at www.globus.org.

How to each AI decision-making skills and common sense: Play games

Jon May and his team at USC Viterbi’s Information Sciences Institute teach artificial intelligence how to react when encountering new environments through text-based video games.

Want to teach an AI to deal with conditions it hasn’t seen before? Start with Monopoly

In a project to make artificial intelligence more adaptable, USC’s Information Sciences Institute starts with a traditional board game — then throws out the rules.

Information Sciences Institute Program Gets $2.1 Million Shot in the ‘Grid’