The storm-dances of gulls, the barking game
of seals,
Over and under the ocean …
Divinely superfluous beauty
Rules the games, presides over destinies,
makes trees grow
And hills tower, waves fall.
— excerpt from “Divinely Superfluous Beauty”

Often described as the quintessential California poet, Robinson Jeffers — and the indelible mark he left on the literary world — was honored at the “Celebrating Robinson Jeffers” event at the USC Libraries.

Marking a homecoming of sorts for Jeffers, who studied at USC before moving to the rugged Big Sur coast, the event drew scholars, authors and readers to Doheny Memorial Library on Oct. 25 for an afternoon festival commemorating the work and life of the poet and his deep-rooted connections to the natural world, Los Angeles and USC.

Dana Gioia, USC’s Judge Widney Professor of Poetry and Public Culture, conceived of the festival as a way to honor the university’s artistic tradition.

“In literature, if you look at the many distinguished writers and scholars who have gone through this school in the last century-plus, the greatest author who 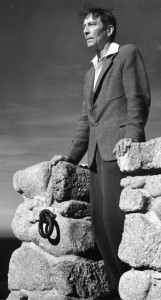 attended USC was Robinson Jeffers,” said Gioia, himself an acclaimed poet who served as chairman of the National Endowment for the Arts from 2003 to 2009.

“It is a wonderful opportunity for us to honor this singular presence in American literature and beyond literature into the very consciousness — especially in the West — of what it means to be both an American and a citizen of the planet,” Gioia added.

For USC Libraries Dean Catherine Quinlan, the festival was a way to honor Jeffers’ connection to USC and “his unique relationship to California as a place.”

“Over the years, we have built a strong collection that documents the history of our region,” Quinlan said, “and it is gratifying to draw upon our libraries’ relationship with California history in order to discover more about the life and work of this special California poet.”

Highlights from that collection, including finely printed books of Jeffers’ poetry and USC student publications in which the poet published his early work, were on display at the festival. The items from the USC Libraries’ Special Collections complemented a selection of rare materials from the Occidental College Library.

Occidental librarians Dale Ann Stieber and Helena de Lemos were on hand to introduce the manuscripts, photographs and books, including a masterpiece of fine printing made from granite and cypress. Jeffers earned an undergraduate degree at Occidental before studying literature and medicine at USC.

Fine printer Michael Peich also spoke about the relationship between Jeffers and fine presses, which specialize in the art of the book and “respond to the poet’s words and idea.” Though national publishing houses printed Jeffers’ work, the poet collaborated closely with the operators of small, personal presses. In fact, it was a fine-printed, limited edition of his Tamar and Other Poems that made Jeffers famous in national literary circles.

Jeffers was born on Jan. 10, 1887, in Pittsburgh. The son of a strict Presbyterian minister, he spent much of his youth on the move before his family finally settled down in Southern California in 1903.

A child prodigy who mastered French, Latin and Greek after one year of instruction, Jeffers enrolled at Occidental — then located in Highland Park — as a junior at the age of 16.

After graduating in 1905, Jeffers enrolled at USC, first taking courses in foreign languages and then entering the forerunner to the Keck School of Medicine of USC.

Jeffers’ relationship with USC’s medical school resonates even today. Karman was introduced by Gere diZerega, professor of obstetrics and gynecology at the Keck School, who serves on the board of the Robinson Jeffers Tor House Foundation. 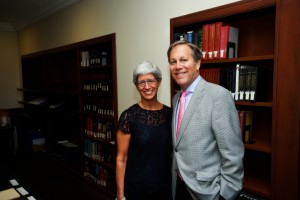 USC is also where Jeffers met his wife and lifelong muse, Una. Their romance — which began in an advanced German class — ruffled feathers in Los Angeles’ high society; Una was then a married woman, and the affair led to her divorce from attorney Edward Kuster.

Gioia, responding to a question from Deverell, placed Jeffers amid a tripartite lineage of California nature writers, beginning with John Muir and ending with Gary Snyder.

Science fiction novelist Kim Stanley Robinson, whose tales of post-apocalyptic Orange County and a terraformed Mars explore the theme of landscape, considered Jeffers’ legacy within the tradition of nature writing.

Robinson said Jeffers “created his own personal religion — a California religion — a Big Sur religion” through his poetry. 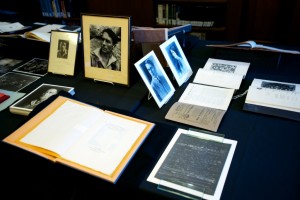 Manuscripts, photographs and rare books by the poet were some of the items on display at Doheny Memorial Library (Photo/Dietmar Quistorf)

Writing about nature from Tor House, a structure that Jeffers himself built out of stone on the wave-pounded Carmel coast, he resisted a human-centric worldview. Instead, he coined the term “inhumanism” and became a hero to the Sierra Club and others in the early 20th-century environmental movement.

As the conference came to an end, Gioia made note of how the success of the event was a testament of Jeffers’ lasting legacy.

“We had such large and enthusiastic audiences all day that I have no doubt that the conference made a difference,” Gioia said. “After half a century of neglect, Jeffers has finally been welcomed back to his alma mater.”

The Scripter Awards honor the year’s most accomplished adaptations for the screen, recognizing the screenwriters and the authors of the source material.

To Sur with love