Close to 4,000 parents arrived on the University Park Campus for Trojan Family Weekend and joined a sell-out crowd to see USC defeat the University of Colorado.

The USC Trojan Marching Band dedicated its halftime show to Trojan families and spelled out “Welcome Parents,” which came as a surprise to Beth Saul, assistant dean of Student Affairs and director of Parent Programs and Fraternity and Sorority Leadership Development.

“We weren’t expecting that,” Saul said. “It was fantastic.”

The number of attendees has more than doubled since the Office for Parent Programs began planning the annual event in 2004. The number of programs offered, as well as the people, departments, divisions and organizations involved, has also grown dramatically.

“The goal is to connect Trojan parents to the university,” Saul said. “The parents have a wonderful visit with their [son or daughter], meet friends and roommates, learn more about USC and the programs their [child] can engage in, and feel the Trojan Family spirit.”

From workshops, tours and lectures to health screenings, dance classes and concerts, Trojan Family Weekend not only offered something for everyone attending, it also provided parents, siblings, grandparents and friends an opportunity to share in the students’ USC experience.

“We met Richard Fliegel, the assistant dean at our son’s college, who sat down at the parents breakfast and talked to us for a long time,” said John Stanley, who came with his wife, Kath, from Gladstone, Mo., to visit their son, Tom, a freshman majoring in economics.

Greg and Sheryl Goldman of San Mateo, Calif., were eager to attend class with their son, Maxwell, a sophomore majoring in music industry.

“We [went] to his favorite class about the music industry to hear from guest speaker Glen Ballard, a music producer our son is really excited about,” Greg Goldman said.

Attending for the third time, Christina Wyrick of Long Beach, Calif., was excited to come back for her daughter, Aliyah Adullah, a junior majoring in public relations.

“The event is wonderful and very welcoming to parents,” Wyrick said. “We can share in the experience of campus life, class with our students, lectures and breakfast. Everything is done so well. I look forward to it every year.”

With “Connecting Trojan Families” as the theme, the weekend officially kicked off on Oct. 18.

On that Thursday evening, quarterback Matt Barkley’s parents, Les and Bev, discussed parenting philosophy at a Parents Council meeting, and four faculty members were honored at the presentation of the annual Steven B. Sample Teaching and Mentoring Awards. 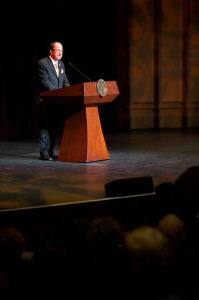 On Oct. 19, Gary Tuchman, CNN national correspondent and father of two USC students, spoke to families about his experiences as a journalist and gave a behind-the-scenes look at the coverage of news stories.

“Having served as a professor, dean, provost and now as president of USC, I have been guided first and foremost by my perspective as a parent,” said Nikias, whose oldest daughter, Georgiana, graduated from the USC Gould School of Law and younger daughter, Maria, received her bachelor’s degree from the USC Annenberg School for Communication and Journalism. “The Trojan Family, of which you are all now a part, is dedicated to supporting the mission and ideals of USC — a commitment to service, leadership and excellence.”

Younger siblings (ages 10 to 17) got a taste of all the fun things on campus at Junior Trojan SCamp, and families had a glimpse of entertaining students at “SC’s Got Talent.”

Throughout the weekend, parents visited the Family Welcome Tent at Herklotz Plaza, which featured groups of students singing and dancing, as well as a student showcase hosted by the USC Stevens Center for Innovation. Parents also got the opportunity to get their pictures taken with band members at the photo booth.

Aru and Vibhas Chandorkar of Redmond, Wash., who had their picture taken next to the Tommy Trojan statue, were excited to attend the football game with their daughter, Aarti, an undeclared sophomore.

“We purchased a lot of gear,” Aru Chandorkar said. “We have to be dressed in cardinal and gold to show our support.”

Parents and families were also treated to a 50-6 victory over Colorado in a football game that featured record-breaking performances by quarterback Matt Barkley and wide receiver Robert Woods.

Ken Seitz of Golden, Colo., summed up the entire experience while eating breakfast with other parents from the USC Viterbi School of Engineering. His son, Michael, is a sophomore majoring in electrical engineering.

“The highlight is spending time with my son,” Seitz said. “That is really what it’s all about.”