Nearly 300 of George Olah’s colleagues and former students arrived from throughout the world to celebrate the 35th anniversary of the Loker Hydrocarbon Research Institute and Olah’s 85th birthday.

“Really, I must tell you,” Olah told the audience at the start of the two-day chemistry symposium. “I had nothing to do with the birthday celebration. What we should really celebrate is this little institute that started 35 years ago. It’s been going a long time, and it never would have happened without the effort of the whole team.”

Olah, Distinguished Professor of Chemistry and Chemical Engineering and Materials Science, and holder of the Donald P. and Katherine B. Loker Chair in Organic Chemistry at the USC Dornsife College of Letters, Arts and Sciences, won the 1994 Nobel Prize for Chemistry for his crucial work on reactive intermediates in hydrocarbons.

“Someone once said that receiving the Nobel Prize is like a death sentence because very few people after receiving this have gone on to do any meaningful work,” Olah told the audience Oct. 18 at the Davidson Continuing Education Center.

“I must publicly apologize to my long-suffering wife, Judy,” he continued. “Because instead of doing the same and just enjoying life a little bit, I couldn’t help but get involved in continuing science. It’s like an addiction. And maybe we have something to show for it.”

That “something” he and the institute’s team have worked on for the past 15 years centers on the problem of what to do once oil and gas reserves run dry, which is expected to occur this century. Then what? It takes millions of years for natural fossil fuels to form.

Olah, G.K. Surya Prakash, holder of the George A. and Judith A. Olah Nobel Laureate Chair in Hydrocarbon Chemistry and professor of chemistry, and their team’s solution is methanol, which can be made solely with water and carbon dioxide — available everywhere on Earth — and any energy sources, such as solar, wind, geothermal or safe nuclear energy.

The burning of fossil fuels creates greenhouse gases that contribute to global warming. Methanol is a clean fuel that could liberate humankind from its dependence on diminishing fossil fuels while controlling harmful emissions into the atmosphere.

“Right now, we’re working on how methanol can be produced in a more environmentally and economically effective way,” Olah said during his talk on methanol that kicked off the symposium “Current Chemical Challenges.”

USC President C. L. Max Nikias noted that Olah earned his Nobel Prize for research he conducted at USC Dornsife. Aware of the need for a long-range program of basic research and graduate education in the field of hydrocarbon chemistry, Olah became founding director of the Hydrocarbon Research Institute in 1977.

A generous donation from the Lokers helped build an outstanding facility that opened its doors in 1979. The university renamed the institute the Donald P. and Katherine B. Loker Hydrocarbon Research Institute in honor of the couple in 1984.

“Under Professor Olah’s visionary leadership, the institute has made astonishing breakthroughs that continue to transform the world,” Nikias said.

“As we celebrate the origins of the Loker Institute and the enduring contributions of Professor George Olah, we also gratefully recall the legacy her family left to all of us,” Nikias said of the late Katherine Loker, who earned her bachelor’s degree in English at USC in 1940. “That legacy reminds us that although much has been achieved, much more exciting work remains to be done.”

USC Dornsife Dean Steve Kay noted that students should graduate not only with a dominating command of their own fields but also as well-rounded scholars and lifelong learners.

“In this respect, I can think of no better model than George Olah himself,” Kay said. “George’s early education and influence had a strong component of the core liberal arts topics, and George himself has noted that as a child growing up in Pest, Hungary, he was mainly interested in history, languages and philosophy.

“It was not until college that he really thought about science and as he puts it ‘the magic of chemistry.’ I hope that our students can take pause to look at the achievements of Professor Olah and recognize the value of broad scholarly pursuit that enables one to compete in specialized fields with ferocity and excellence.” 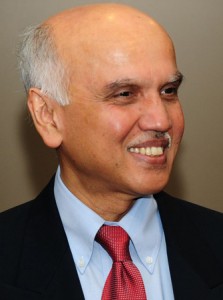 Olah, Nikias and Kay acknowledged Prakash, who arrived at USC Dornsife in 1977 as one of Olah’s graduate students. An integral part of the institute’s success for decades, Prakash is the institute’s director.

Prakash hosted the symposium, which drew colleagues from as far as Brazil, China, Germany, Hungary and Japan.

Garrett pointed out that since its inception, the institute has trained more than 600 doctoral and postdoctoral fellows from around the world. The scientific work has resulted in more than 1,600 citations in leading technical journals, monographs and books.

More than 100 patents have been issued based on discoveries from the institute, many of which have been licensed and commercialized, particularly in the areas of fuel cells, gas production and the methanol economy.

“What is so impressive about George is that he has achieved more in his field than most scholars only dream of achieving, and yet he continues — after more than six decades — to look ahead,” Garrett said.

Charles McKenna, professor of chemistry and vice dean for natural sciences, and Chi Mak, professor and chair of chemistry, both at USC Dornsife, also spoke during the dinner.

“George, representing the USC Dana and David Dornsife College of Letters, Arts and Sciences, but also as your admiring colleague and friend, happy birthday and all success in your extraordinary and continuing endeavors to ‘produce the future,’ ” McKenna said.

One of Olah’s many former students who participated in the symposium was Eric Marinez, now associate professor of chemistry at California State University, Long Beach. Olah was the research adviser for Marinez, who earned his PhD in chemistry at USC Dornsife in 1999.

“George Olah is clearly passionate about his science, but he also deeply cares about his students,” Marinez said. “He treated his research group like an extended family. He created a pleasant environment. That’s what I remember most as one of his scientific children.”