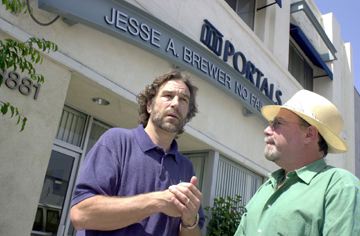 Social work professor John Brekke and Bob Aisley, a long-term research assistant for Brekke, at the Jesse A. Brewer No Fail Community Center in South-Central Los Angeles. Brekke conducted much of his research at the center, a dual-diagnosis rehab facility.

Schizophrenic individuals who live in community settings and don’t abuse drugs are more likely to be victims than perpetrators of violent crimes, according to a USC study published this month in the journal Psychiatric Services.

The five-year study conducted by John Brekke and his colleagues found that people diagnosed with schizophrenia were twice as likely to be assaulted, raped or robbed than the general public.

In addition, Brekke concluded that people with schizophrenia were 14 times more likely to be victims of crimes than to commit crimes. He found that 38 percent of the schizophrenic individuals in the study were the victims of a crime during the five study years, and that 91 percent of the incidents were violent.

“The community poses more danger to [individuals with schizophrenia] than they pose to the community,” said Brekke, author of “Community Risk for Individuals Diagnosed with Schizophrenia.”

“That goes against the stereotypes of the population,” he added. “Many people fear that the mentally ill are generally dangerous.”

That common misperception may explain why the schizophrenic individuals were 45 percent more likely to be arrested than the general public.

Few of the arrests of people in the study were for aggressive behavior, but rather were for traffic violations or jaywalking. The arrest rate for violent crimes among patients diagnosed with schizophrenia was 40 percent lower than the general public.

Brekke’s study, which was funded by the National Institute of Mental Health, followed 172 individuals diagnosed with schizophrenia living in non-institutionalized settings from 1989 to 1991. They were interviewed every six months by researchers, who asked them about their contact with police, crimes against them and crimes they committed.

Because the study group lived in community homes and did not have substance abuse problems, Brekke expected a lower risk of trouble. Yet in five years, half of these individuals had contact with police, and a third were victims of violent crime at rates that exceeded those for the general population.

“We didn’t expect the results would be this striking,” he said.

Brekke said the findings clearly point to a need for additional mental health training for officers.

The study is one of the first to look at people with schizophrenia living in urban areas. Because the individuals were not homeless or drug abusers, they were considered low-risk samples.

Brekke’s investigation is groundbreaking because it examines the ways in which self-sufficient adults with schizophrenia are victimized and how little they actually victimize others, said Marilyn Flynn, dean of USC’s School of Social Work.

“The data John Brekke gathered should help police, policy-makers and society at large re-assess assumptions about this population and perhaps lead us to consider new approaches,” Flynn said.

At first, Brekke was not going to publish the research. The study grew out of a different research project that looked at individuals with schizophrenia in different models of community care.

“We had published our main outcome findings, and this study was a secondary outcome,” Brekke said. “It wasn’t until we saw the data that we became convinced there was some really important information here.”

Brekke hopes that policy-makers, law enforcement officials and service providers will look at the data and make it a point to work together.

“The police need education and training about mental illness and community-based crisis assistance from trained mental-health providers when they deal with the mentally ill,” he said. “Mental health providers need to be able to assist with the difficult situations that police find themselves in with regard to persons with severe mental illness.”

Cross training for police and mental-health professionals could provide some of these linkages. Also useful would be the development of special response units that coordinate mental health and police personnel.

“Some of this is already occurring in Los Angeles,” said Brekke, “but it needs continued attention here and across the country.”

Though it may seem like a global pandemic and the genocide of a people have very little in common, the long-lingering effects of trauma on survivors are similar.