Lugging a weightlifting bar, a woman in a white summer dress walked in, her expression a mix of relief and exhaustion.

Known as the “demo lady” for her demonstrations at physics lectures, she had trekked on a warm day from Seaver Science Center to the shrine of gadgetry at USC: the machine shop in the basement of Kaprielian Hall.

The bar was to be mounted on a custom-made pivot and loaded with weights so it could be spun rapidly. The setup would demonstrate the gyroscopic effect: A heavy bar rotating horizontally can be lifted with one finger if you spin it fast enough.

Unfortunately the gyro effect was not available during her walk to the shop. The weary woman passed the solid metal bar to Donald Wiggins, one of two foremen. In exchange, he handed her a finished order for her next demo: a three-wheeled car about a foot long, milled from a brick of PVC plastic and ready to be propelled with gas escaping from a canister.

Making demos is just one slice of the machine shop’s mission. The shop gives concrete form to custom parts for experiments that emerge from the imaginations of scientists at the USC Dornsife College of Letters, Arts and Sciences and the USC Viterbi School of Engineering.

In high-tech activity on one typical day, the shop’s craftsmen were making a microscopic mask for chemicals to be sprayed onto electrodes; cutting a stainless steel holder for radioactive samples; buffing a plastic microbe trap to be placed in a hole under the ocean’s crust; and finishing a spider-like stand for multiple microphones realized from a researcher’s crude drawing on the back of scrap paper. 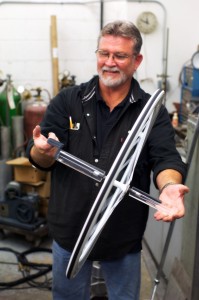 USC Dornsife foreman Donald Wiggins holds up a wheel to be used in a physics lecture as a demonstration of gyroscopic forces at work. (Photo/Dietmar Quistorf)

“This is a dream job for a machinist because you’re always doing something different,” Wiggins said.

Others find it fascinating, too. Wiggins chuckled when he remembered one customer who would pull up a chair and observe the proceedings.

“I just love to watch you guys cut metal,” he would tell them.

The guys cut metal on an assortment of milling machines — which can make almost any object from a three-dimensional graph — along with lathes, grinders, saws and welding equipment.

At the back of the shop, racks of metal stock, raw bricks of black PVC plastic and older but still useful machines are snugly stored. Metal shavings cover the floor and nearly every other flat surface.

The shop opens at 6:30 a.m. and closes around 3 p.m., barring last-minute requests. A united bunch, Wiggins and his two machinists carpool to work from the Norwalk Metro station. Each is a faithful contributor to the USC Good Neighbors Campaign.

Wiggins has been at the shop 25 years. In a sign of the shop’s importance to faculty, his hiring committee included a dean and vice dean. Knowing that experimental science works by trial and error, the two deans kept asking the same question: “Is it going to bother you to make something over?”

“Just as long as it’s not my mistake,” Wiggins replied.

Do-overs are less common in the other half of the shop, which serves engineering faculty at USC Viterbi.

“That’s the difference between engineering and science. They know what they want,” said foreman Kan Lee, a 20-year veteran.

Lee’s toys include a granite measuring table so flat that the highs and lows on its surface differ by a third of the width of a sheet of paper. Six feet long, 3 feet wide and as deep as a plush mattress, the slab defeated the university’s forklifts and had to be brought in with special equipment.

Lee is stern with his crew and tender with his machines. He insists that “machine-eating material” be worked on the older and less user-friendly lathe at the back.

“Some people get mad at me, but I’m a real stickler about taking care of equipment,” he said. 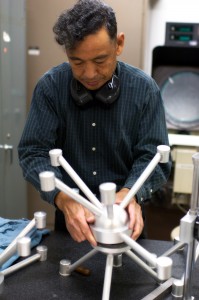 Lee likes to buy used material — iron gets better with age, he said — and rebuild machines for half the cost of buying a new one. His crew still uses the milling machines he had rebuilt 16 years ago, after becoming foreman.

He keeps a drafting table behind his desk but is not a trained draftsman. That did not stop him from helping to realize a professor’s vision for a multipronged microphone array to serve as a listening device for military applications. The professor’s freehand sketch served as his slight guidance.

Lee estimated that his shop completes about 130 jobs each year from engineering professors. The shop not only tackles technical challenges but can also help in securing and maintaining grants.

In one recent federal grant program, Paul Ronney, professor of aerospace and mechanical engineering, was the only grantee who used a custom-built engine dynamometer (using an automotive alternator to simulate the load placed on the engine) rather than a commercially made one. The extra effort impressed the grant monitors.

Supporting credit went to the immovable granite slab that made it possible to build and test the precision instrument.

More importantly, credit was due to the machine shop itself, an immovable part of the scientific life.