Everyone has been warned about the number of forcing mechanisms, such as solar radiation, continental drifts and increased emissions of greenhouse gases, that are causing a change in global temperatures around the world.

Nonetheless, Douglas Capone, professor of biological sciences at the USC Dornsife College of Letters, Arts and Sciences, has an alert for all: Climate change is already here.

“And it’s going to affect everything that we care about in terms of the local environment, both on land and in the ocean, from the temperature to the cloudiness to the amount of fish that are produced in local waters and everything in between,” added David Hutchins, professor of biological sciences at USC Dornsife.

The comments by Capone and Hutchins followed an international workshop on climate change they both organized and co-chaired on Oct. 3 as part of the USC Dornsife 2020 thematic research initiative, in which scholars are taking a close look at solutions for the world’s global challenges.

Drawing more than 70 leading scientists in climate change, oceanography and marine biology to Doheny Memorial Library, the daylong event was attended by USC Dornsife graduate students and faculty from earth sciences, as well as the marine and environmental biology departments. Key representatives from the local water districts and fisheries also participated. 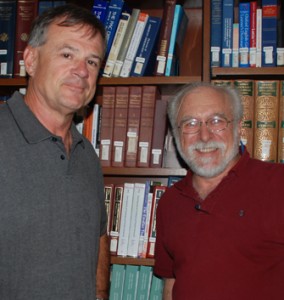 For the purposes of their research, scientists focused on the Southern California Bight — the curved coastline stretching south from Point Conception down to the waters off Ensenada, Mexico.

“We live in a place where one of the world’s largest urban areas meets one of the world’s most dynamic natural coastal systems,” Hutchins said. “The effects of climate change on those dynamics and its interaction with the 18 million people in our greater urban area will be a crucial matter to people in the near future.”

In a recent Los Angeles Times article, Hutchins was quoted about how radically rising acidity in the ocean resulting from the absorption of carbon dioxide will eventually threaten marine wildlife, the multimillion dollar seafood industry and even one’s health should people eat contaminated seafood.

The research by Hutchins showed that harmful algae off the California coast thrive in acidic conditions. The algae, he said, produce increased toxins that can contaminate shellfish, sickening and possibly even killing humans who eat it.

Dale Kiefer, professor of biological sciences at USC Dornsife, noted that the Southern California Bight appears vulnerable to this acidic, or corrosive, water that is enriched with carbon dioxide and depleted of oxygen, and which seems to be expanding with global warming.

“If it continues to expand, there is a greater chance that this deeper, more acidic, water enters surface waters, therefore increasing the risk that it will damage resources,” he said. “Our region is dominated by small, pelagic fish, including squid, sardine and anchovies, which will move north as temperatures increase and their predators, such as larger species of pelagic fish and sharks, will have to follow. So there will be a march up the coastline.”

During the workshop, Kiefer announced the early November launch of Bight Watch, a USC Dornsife-based website he has created to allow scientists to consult geographic information on indices of environmental conditions, such as water temperatures, coastal circulation, oxygen concentration and chlorophyll.

The website, which will make available selected series of measurements of these properties in the Southern California Bight, is not Kiefer’s only research undertaking.

Along with postdoctoral fellow Lori Luo of USC Dornsife, Kiefer has teamed up with modelers from California’s Jet Propulsion Laboratory (JPL) and the California Institute of Technology to examine how the Southern California Bight would be affected by regularly occurring natural conditions associated with climate change, such as El Niño, La Niña and the Pacific Decadal Oscillation.

By using statistical analysis to compare satellite images with JPL’s global circulation models, the team was able to confirm that the models do an excellent job of predicting climate responses to the factors that drive the ocean’s circulation patterns.

“This means that we know these global models are reliable, and we can use them to make predictions,” Kiefer said.

Burton Jones, professor of biological sciences at King Abdullah University of Science and Technology in Saudi Arabia, spoke about urban influences on local and global oceanography.

Jones, a former USC Dornsife professor for 31 years, called for more detailed sampling methods, including the use of gliders, to track the movement of nutrients and metals, among other human-discharged materials coming from sewage treatment plants.

Climate change is upon everyone, participants agreed, but uncertainties still remain about the exact forms it will take in the future and the ultimate effects it will have on the environment.

However, Capone and Hutchins are confident that scientists will be able to make increasingly accurate predictions about the world’s climate change.

“We know that even if we stopped putting carbon dioxide out into the atmosphere, we are going to be experiencing something like a 2- to 3-degree centigrade increase in temperatures on land throughout the [Los Angeles] basin by 2050,” said Capone, who explained that the seas have already absorbed more than 500 billion tons of carbon dioxide that has built up in the atmosphere since the Industrial Revolution, mainly from the combustion of fossil fuels.

Toward the end of the workshop, Kiefer joined Capone and Hutchins in paying homage to the credentials of the speakers and participants.

Capone said the outstanding achievement of the workshop had been “getting all these people together in the same room to talk to one another and exchange ideas.”

“I’m hoping that the informal interactions here will lead to new collaborations,” he added.