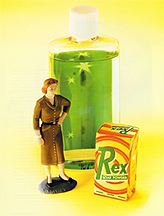 It seems that everywhere we turn, there is another product to wipe, spray, wash and decimate every germ that ever dared to exist. The media are awash in advertisements for products that keep germs off our bodies, sinks and countertops. Grocery store shelves are filled with antibacterial lotions and soaps to sanitize playrooms and bathrooms.

And yet, we still wheeze, sneeze and cough, with no apparent relief from all the scrubbing and scouring.

But now studies are showing that the obsession with cleanliness may not be as healthy as we have been led to believe. In fact, a little bit of germs and dirt may actually help boost our ability to fight illness..

This shift in thinking can be traced back to 1989, when a researcher named D.P. Strachen put forth the “hygiene hypothesis” in the British Medicine Journal. Strachen’s theory asserts that the reduction of early childhood infectious disease, due to widespread vaccination of children or increased use of antibiotics, has led to an increased prevalence of allergic diseases. In his study, Strachen noted an association between large family size and reduced rates of allergy and asthma.

Since the publication of Strachen’s hygiene hypothesis 12 years ago, other investigators have added their findings to the literature. Their work is part of a scientific effort to explain why the number of children who develop asthma has grown so dramatically in recent years. According to a report from the Centers for Disease Control and Prevention (CDC), the number of asthma cases in the United States has doubled in the last two decades – from 6.8 million to an estimate of more than 15 million in 1998. About 5 percent of the U.S. population has asthma. The highest proportion is among children age 5 to 14.

One of the most recent contributions to the hygiene hypothesis appeared in the August 24, 2000 issue of The New England Journal of Medicine (NEJM).

The article described a study by researchers at the University of Arizona who examined the incidence of asthma in 1,035 children. They tracked the incidence of asthma and the prevalence of frequent wheezing in relation to the number of siblings in the home and whether they attended day care during infancy. Asthma was defined as at least one episode of asthma diagnosed by a physician when the child was 6 to 13 years old; frequent wheezing was defined as more than three wheezing episodes during the preceding year.

They found that the presence of older siblings at home protected against the development of asthma, as did attendance at daycare during the first six months of life. Children with siblings or in day care were more likely to have frequent wheezing at the age of 2 than children with little or no exposure, but were less likely to have frequent wheezing from the age of 6.

Ronald M. Ferdman, M.D., assistant professor of clinical pediatrics at the Keck School of Medicine, is an attending physician in the division of clinical immunology and allergy at Childrens Hospital Los Angeles. As an allergy specialist, he primarily treats children with severe allergic and immunologic conditions, including asthma and other allergic diseases.

While Ferdman gives some credence to the hygiene hypothesis, he says it is only a part of the story. “I see asthma asa multifactorial problem,” Ferdman says. “While the rising incidence may have something to do with cleanliness, other factors may include obesity, lack of exercise and environmental pollutants.”

However, he believes the data of the NEJM study have merit-observing that “parental paranoia” is a trend that may cause more harm than good. “It seems that parents these days are a lot more worried about minor infections in their kids,” Ferdman says. “Nobody would say that you should purposely expose your child to infections. On the other hand, there is no need to keep children in a bubble. In America, there is no risk of exposing children to malaria or some horrendous disease. But parents do get upset if their child comes down with a cold.”

Evidence of this paranoia is everywhere. According to an article in the online magazine Salon, in May 1999, nearly 700 new antibacterial products hit the market in the United States between 1992 and 1998. It seems that playing on the “germ fear factor” translates into brisk business.

Ferdman points out that 200 years ago, asthma was rarely mentioned in the medical literature, and in the early 1800s, five patients with asthma constituted a case report. Since then, there has been a steady rise in the incidence of asthma. The question then becomes: Was it America’s focus on cleanliness in the early 1900s or the industrial revolution that prompted this growth?

David C. Sloane, Ph.D., a medical historian and associate professor of policy planning and development at USC, views the hygiene hypothesis as “fascinating yet early in its formation. It could either be completely right or completely wrong.” He says that historical observations seem to support the hypothesis-to a point.

Sloane says, “The campaign to clean both the body and the home goes back quite a few years. The health reformers of the 1830s saw the power of water as a hygienic agent. And during the latter part of the 19th century, public baths were being constructed across the country.”

He adds, “But, until the middle of the 18th century, it was typical for people to live in houses that had dirt floors. And water sources were limited through the 19th century.” Thus, the old lore about a Saturday night bath was not far from the truth. “It was all a typical household could afford,” Sloane says.

“This campaign had tremendous benefits, the most important of which has been the understanding and eradication of cholera and gastrointestinal disease linked to materials that can be found in dirt,” Sloane says. “Now, researchers arebeginning to believe that there may be negative consequences from that and are arguing that our immune systems aren’t as strong as they would be if children were interacting more with dirt.”

Sloane says several problems with the hygiene hypothesis are linked to timing. The emphasis on cleanliness has been part of American life since at least World War II-way before the incidence of asthma started to rise. “I am skeptical that the environment has changed that radically,” Sloane says. However, he notes, concerns for children’s health and safeguarding children is a continuing obsession and contemporary parents have had more tools to feed this obsession, be it antibacterial wipes or HEPA filtered vacuum cleaners.

Second, there is some evidence that children are not as independent in their play and daily activities as were their grandparents 50 years ago. Parents are more interested in organized activities that may not be as spontaneous or “in the dirt” as the sandlot baseball games of days gone by.

Sloane calls the hygiene hypothesis intriguing but “hard to put your arms around.” It is a topic, however, that is definitely worthy of study.

Essentially, the hygiene hypothesis argues that diseases such as asthma and allergies are increasing in prevalence because the immune system is not being effectively constructed in the early years. Children are not as often subjected to the bacteria that help those immune systems build.

The assertion is that early exposure to germs shapes a baby’s immature immune system by bolstering the white cells that fight bacteria. Hygiene-hypothesis proponents argue that if a child is protected from early infections, the immune system’s other white-cell army, which fight parasitic infections, will prevail.

Robertson Parkman, M.D., a professor of pediatrics at the Keck School of Medicine of USC, has worked at Childrens Hospital Los Angeles for 17 years, focusing on bone marrow transplantation and immune deficiencies. He says that the hygiene hypothesis has some merit, citing how, in many Third World countries, young people exposed to native or external diseases develop immunities to them. “In America,” Parkman says, “we immunize people.”

And immunization continues to be a key tool in preventing illness. John M. Leedom, M.D., USC professor of medicine and chief of the division of infectious diseases, urges, “Get your child immunized. The best way to build up immunities to serious conditions is to be immunized. Many diseases have been eradicated, not by the body’s ability to build up immunities but by the judicious use of vaccination.” Further, he questions the theory that vaccinations are causing an increase in asthma, or that the lack of exposure is making us sick.

Parkman agrees that beyond the immunity aspect of the hygiene hypothesis, the theory has some holes in it. For example, he points to a study at Johns Hopkins University School of Medicine in Baltimore that goes against the idea that exposure to antigens earlier is protective. He says the study showed that in poor kids, a major cause of asthma was household dust mites-a problem that is related to cleanliness. “The exposure to an antigen (associated with dirt) early on increases the probability of asthma, which is the opposite of the contention of the hygiene hypothesis,” Parkman says.

Richard G. Barbers, M.D., USC professor of medicine at the Keck School, agrees with this assessment, adding that cockroaches have also been linked to increased asthma. Barbers, co-director of the USC Lung Transplant Program and medical director of the Adult Asthma and Allergy Center, cites a study published in a 1997 issue of the New England Journal of Medicine that named the lowly cockroach as a major player in the growing problem of asthma among children in the inner cities of the United States.

In the study, researchers found that children who were hypersensitive to cockroach allergens and whose homes contained high levels of those allergens were much more likely than other children to be hospitalized for asthma-related illness, make unscheduled visits to the doctor, miss school and have bouts of severe wheezing.

Ferdman believes that the data from the recent New England Journal of Medicine article and the hygiene hypothesis have validity. However, he does take issue with the NEJM study’s age cut-off of 6 years.

“This study is an attempt to predict who may outgrow childhood wheezing and who may not-and uses 6 as the cut-off age,” Ferdman says. “However, this approach may send out the message to parents that asthma does not need to be treated until 6 years of age, and this is just not true. We have kids with asthma under 6 years old who have been hospitalized multiple times.”

He adds, “I always tell parents who have a wheezing child that we can’t predict who will outgrow asthma. All wheezing needs to be taken seriously-even though it may be transient wheezing. If the child is destined to outgrow the asthma, he or she should be kept healthy until that day comes. Whatever the ultimate cause of asthma, the condition must be treated at any age.”

Barbers believes that something is occurring in the environment-be it dust mites, cockroaches, molds-that is making the body hyper-respond to these allergens and causing asthma. He also gives credence to the hygiene hypothesis in that “we may be over-protecting kids, and their immune systems, consequently, do not become well-developed.”

Barbers notes that only time and a lot more research will tell whether the hygiene hypothesis is valid, and whether, once again, parents should let their kids play in the dirt.

Getting the Dirt on Germs

Political conventions take an unconventional turn, thanks to COVID-19

What will the Democratic and Republican national conventions look like during a pandemic? USC experts predict how each party — and the voters — will proceed.

Fall 2020 update: A message to the Trojan Family from President Carol L. Folt

The USC president shares words of welcome along with academic and activity highlights, health care updates, student and community aid information, initiatives on diversity and inclusion, and much more.