USC’s annual Move-in Day brought smiles, tears and everything in between, as the incoming class of freshmen left the proverbial nest to settle into what will be their new homes for the coming year.

And to help with the big transition, students brought with them an arsenal of reinforcements — their family and friends.

In front of Pardee Tower, Michelle Vargas stood guard next to an orange bin teeming with clothes, books and personal items. The San Diego resident was waiting patiently for her daughter, Saralynn, to return from her dorm room and help haul the rest of the boxes. 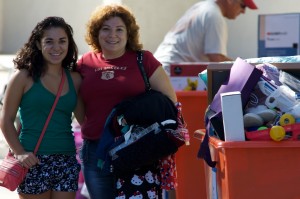 “At least she better come back!” Michelle said jokingly.

Saralynn, an incoming freshman at the USC School of Architecture, brought her parents as part of her move-in team.

“I have mixed feelings. I’m very happy for Saralynn, of course, but we’re going to miss her a lot,” Michelle said. “I gave her a lot of lectures last night … to be aware of this and that. She’ll do well, I’m sure of it.”

Saralynn finally joined her mother. When asked why she chose USC over other schools, she said for the passion.

“People here are very passionate, very happy,” she said. “You can just see it.”

On the other side of campus, Timmy Robinson stood in a queue outside Fluor Tower. He was hand in hand with his younger sister, Jaelyn, as he waited to pick up his dorm assignment and keys; his mother, Lisa, was inquiring about laundry services at a nearby table.

“I didn’t even start packing until this morning. I think I have enough to fill one bin,” Timmy said of his light packing. 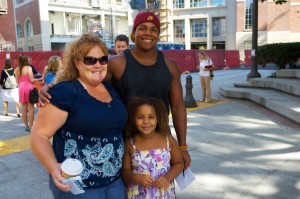 Timmy Robinson with his mother, Lisa, and his younger sister, Jaelyn, in front of Fluor Tower (Photo/Dietmar Quistorf)

The incoming USC freshman outfielder, whose brother Alex Burnett pitches for the Minnesota Twins, was drafted by the same team but decided to hold off on his professional aspirations until after college.

“Because of the education,” Timmy said matter-of-factly.

Freshman Janae Monfort and her mother, Lana, wheeled a bin filled with personal effects along the sidewalk in front of New Residence Hall. They took a two-day road trip from Olympia, Wash., to get here.

“I’m really excited. I was really worried that it would be hectic this morning, but it’s a lot more organized than I thought,” said Janae, who is majoring in biological sciences at the USC Dornsife College of Letters, Arts and Sciences.

“We were anticipating a lot of traffic so we got here early,” Lana added. “But so far it’s been great. I’m very impressed with the service here and the people … just the Trojan Family as a whole.” 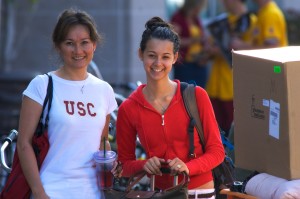 Unlike years past, this year’s Move-in Day seemed a lot quieter — perhaps a testament to all of the preplanning that took place.

In addition, galloping all over campus like the pony express — sans horses — were the parent volunteers, Move-in Day veterans who spend hours standing outside residence halls to impart advice and encouragement to the newcomers.

This year, nearly 46,000 seniors from every U.S. state and 123 other countries applied for an estimated 2,650 places in the fall’s entering class. Ninety percent of admitted freshmen rank in the top 10 percent of their high school’s graduating class, and 75 percent of admits have standardized test scores above the 95th percentile. The average unweighted high school GPA is 3.82 on a four-point scale.

Forty-seven percent of admitted students are from California, with 13 percent representing 70 foreign countries. The remaining 40 percent come from the other 49 states and U.S. territories.

The fall semester will begin on Monday, Aug. 27.

In a simulated case competition, USC Price students recommended how the U.S. might respond to the pandemic and prevent further spread.

In 1998, the USC Leonard Davis School was the first school accredited to teach a master’s program at a distance. That depth of experience has helped its faculty hold online classes amid the COVID-19 pandemic.

Move-in Day brings excitement, with a side of anxiety