As the old school bus wound its way through the steep mountain passes of northern Taiwan, the students gazed out the windows at the lush, tropical topography unfolding before them. At the outskirts of the village, the bus shuddered to a halt at a beautiful spot alongside a creek spanned by a couple of bridges.

The students, who were part of the Problems Without Passports (PWP) program at the USC Dornsife College of Letters, Arts and Sciences, quickly dispersed to take photographs and look around.

USC Dornsife senior and linguistics major Jackie Kim wandered with several classmates to the spot where a few aboriginal Taiwanese were selling fruit.

Adjacent to their stands was a small faucet where fruit could be rinsed and immediately consumed. The students recognized some special plums that had been given to them by a native Atayal speaker earlier that week, and they stood admiring the fruit.

Atayal, an Austronesian language, is spoken fluently by only a few hundred people in northern Taiwan today. Mandarin is Taiwan’s official language.

“The [fruit sellers] were definitely excited,” Kim said. “They thought it was awesome that we even had an interest in learning the language because even many Atayal children don’t know how to speak the language.” 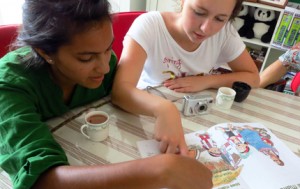 Khalil Iskarous, assistant professor of linguistics at USC Dornsife, taught the six-week course in Taiwan focusing on the endangered Atayal language and culture. In keeping with the PWP’s goal of combining problem-based research with study in a foreign country, the course was designed to allow graduate and undergraduate students substantive experience doing work in the field while learning about a global problem.

The majority of people are familiar with endangered species. But endangered languages? According to linguists and other cultural preservationists, this phenomenon is a serious problem, hastened over the last few generations by globalization. Just this summer, Google launched an endangered language documentation project to help address the issue.

Thanks to a grant from the National Science Foundation, Peter Guekguezian, a second-year doctoral student in linguistics at USC Dornsife, accompanied the group to Taiwan along with one other graduate student. Guekguezian was eager to take advantage of the rare opportunity to do linguistic field research.

“Sometimes sitting down in front of a computer can be tedious, even boring,” Guekguezian said. “But when you’re out there talking with someone and really getting to know their language on a firsthand basis, it’s just wonderful. You really get to see why language is such a human science … the human experience is really captured through language.”

The course, which took place from May 16 to July 6, was open to all majors and areas of study. Students worked with native Atayal speakers to document the language using largely acoustic data recorded from conversations and their recounting of cultural folklore. For the first two weeks of the program, students studied at USC, learning the basic Atayal vocabulary, grammar and the principles of language documentation.

During the trip, Iskarous and his students traveled to the city of Hsinchu, an hour and a half from Taipei by bus. Native speakers came down from their mountain villages to work with students at National Tsing Hua University three days a week.

Each student selected a different aspect of Atayal culture to research in order to develop a diverse lexicon and linguistic record. As they gathered their data it was then parsed, labeled and entered into a shared Internet database.

“The students did an amazing job,” Iskarous said. “They took the documentation work extremely seriously and worked five to six hours a day, most days of the week. They worked closely with the native speakers, collecting conversations then transcribing a language they didn’t really know. They came up with translations with the knowledge they had gained in only six weeks about the language. We ended up with quite a bit of data.”

Program participants spoke of the graciousness of the Atayal people.

“I think it meant something to them to get to know people like us who were actively interested in their language,” Guekguezian said. “For me, it was just great to see the language so alive.”

Kim took advantage of her free time by traveling around the island as much as possible.

“I was really impressed by Taiwanese hospitality,” she said. “If you asked someone for directions, they would walk with you for a mile until you found what you were looking for.”

On her last day in Hsinchu, Kim took a 21-mile bike ride along the coastline, which she said was especially memorable. She also explored the popular night markets found in Taiwan’s urban areas, which feature a huge selection of inexpensive clothing, jewelry and food.

Much more than a cache of esoteric research papers, participating students played a direct and important role in establishing an enduring record of Atayal that could potentially be used by scientists or even descendants of the speakers who may one day want to learn more about the language and culture.

“Getting the opportunity to do field work as an undergrad is very difficult if you don’t have much experience,” Kim said. “It was life-changing. I know that sounds extreme, but it just opened my eyes to so much.”

Iskarous was recently awarded a three-year grant from the National Science Foundation in the amount of $973,963. His research will investigate the relation between the muscular movements involved in human language and the muscular movements of the octopus arm and a 1-millimeter worm. These latter two species have muscular systems related to those of the human tongue.

The USC trio will explore trends in business, media and culture during a one-year master’s program at Tsinghua University.

For a half century, an advanced curriculum has helped nearly 1,200 foreign-trained dentists relaunch their dental careers in the United States.

Collaboration is at the heart of the USC International Artist Fellowship

The program’s simple yet ambitious goal: to foster a robust international arts community focused around the Pacific Rim, Latin America and Southeast Asia.