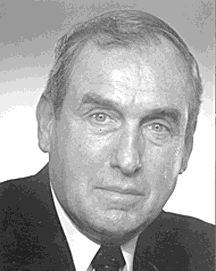 Internationally known businessman and financier George Thomas Scharffenberger, a USC trustee for three decades, died Nov. 10 at his home in Rolling Hills after a brief illness. He was 82.

Scharffenberger was appointed to the USC board of trustees in 1973, serving as chairman from 1985 to 1990. He was appointed a USC life trustee in 1994.

Born in 1919 in Hollis, N.Y., Scharffenberger took for granted that he’d one day enter the business world: Both of his parents were accountants.

He studied accounting at Columbia University, earning a B.A. degree in 1940 and joining the accounting firm of Arthur Andersen & Co. He left the firm to join the war effort in 1943.

After serving in the U.S. Army, Scharffenberger joined International Telephone & Telegraph Corp. and rose to become president of its ITT Kellogg subsidiary.

He joined Litton Industries in Southern California in 1959, serving as president of its Westrex division and later becoming a senior vice president in charge of defense and space systems.

In 1966, Scharffenberger joined City Investing Co. as president and CEO. He later became chairman and CEO. City Investing was an NYSE-listed real estate holding company with properties in New York City and a largely undeveloped 22,000-acre parcel on the New York-New Jersey border an hour from Manhattan.

Under his leadership, annual revenues of the combined enterprise grew from $10 million to $6.5 billion. In the 1970s, the company was one of the most actively traded issues on the New York Stock Exchange.

In the mid-1980s, Scharffenberger set out to realize for shareholders the values he saw in City Investing, divesting its subsidiaries and distributing the proceeds to shareholders in what was believed to be the largest voluntary liquidation in the nation’s history. Assets valued at a total of $8 billion were distributed, including shares of the Home Group, City Investing’s principal insurance operation.

Following the liquidation, Scharffenberger continued as chairman of AmBase Corp., an NYSE-listed insurance and financial services company, until his retirement in 1994.

He was awarded honorary doctor of humane letters degrees by USC in 1984 and Georgetown University in 1987. He received a Presidential Medallion from USC in 1990, a Lifetime Achievement Award from the College of Mount St. Vincent in 1987 and a Distinguished Service Award from the Association of Governing Boards of Universities and Colleges in 1989.

He served as a member of the Board of Regents of Georgetown University from 1969 to 1973 and was a member of its board of directors for two terms.

A close friend of President Reagan and his wife, Nancy, Scharffenberger was a co-trustee of the Ronald Reagan Blind Trust during the Reagan presidency.

Scharffenberger served on the board of directors of the U.S. Equestrian Team and was a longtime supporter of the peninsula committee of Childrens Hospital Los Angeles.

He served as chairman and trustee of the Academy of Political Science, a director of the National Energy Foundation and a trustee of the Intrepid Museum, New York. He was a member of the Economic Club of New York, the California Club in Los Angeles, the Los Angeles World Affairs Council and the Financial Executives Institute.

Funeral and interment services will be private. In lieu of flowers, donations should be made to the G.T. Scharffenberger Memorial Scholarship Fund at USC.

Dorothy H. “Dotty” Pin, whose dedicated work as USC’s curriculum coordinator in the 1970s was legendary among her colleagues, died Oct. 18. She was 80.

Claire Fein, a retired secretary from the department of teacher education, was Pin’s friend for many years. “We traveled together, and she was the most energetic person I ever knew,” said Fein. “She was perpetual motion.”

A volunteer for KPFK, Crenshaw Neighbors and Living Colors, Pin began her career at USC at the age of 50.

Pin was born in St. Paul, Minn., and she and her husband, Gordon, raised their family in Los Angeles.

She is survived by two daughters, a sister, three grandchildren, and many nieces and nephews.