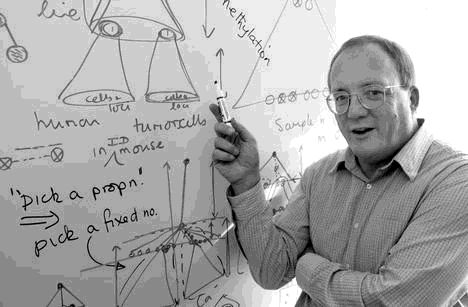 Biomathematician Simon Tavaré, above, and pathologist Darryl Shibata are using computer science and statistics methods to work out how stem cells in the human colon perpetuate themselves and eventually turn cancerous.

By doing further statistics on this data and matching it with various computer models of the cell division process, they could estimate the average number of stem cells at work at the bottom of each crypt.

Twenty years ago, even scientists at the cutting edge of biological research would have been surprised to know that mathematics and computers – remember the TRS 80 and the Apple II? – would become indispensable tools in biology and medicine.

But it has come to pass, and we now live in the era of bioinformatics – the use of advanced computer science and statistical methods to analyze the vast, complex bodies of data confronting biologists today.

Take a case in point.

In an ongoing collaboration, biomathematician Simon Tavaré and pathologist Darryl Shibata are working out how stem cells in the human colon perpetuate themselves and eventually turn cancerous.

While their investigation is now limited to this specific province of the human anatomy, it has ramifications for understanding the dynamics of stem cells and tumorgenesis more generally and throughout the adult body.

The colon wall is studded with millions of microscopic pits, called crypts, that are composed of about 2,000 cells each. At the base of each crypt are an unknown number of colon stem cells – “immortal” cells that throughout one’s lifetime spin off a steady supply of colon cells that make up the crypts. Unlike the stem cells, these much more ordinary cells can divide only a finite number of times before eventually dying out.

In their most recent study, published in the Sept. 11 Proceedings of the National Academy of Sciences, Tavaré and Shibata used statistics and modern technology for rapid DNA sequencing to infer how many stem cells there are in each crypt.

“This is one of the first attempts to quantify the normal behavior of human stem cells,” said Tavaré, a professor of biological sciences, mathematics and preventive medicine.

Their method was to record the pattern of harmless decorations, called methylation patterns, in the DNA of several cells sampled from a given crypt. Because every cell inherits a unique methylation pattern from its mother cell, and in turn passes along a unique pattern (bearing a few new mutations that weren’t inherited) to all its daughter cells, the scientists were able to determine the crypt cells’ lineages all the way back to the stem cells.

“The data we have suggest there are probably between 10 and 40 stem cells per crypt,” said Tavaré. He added that more data on the way should further constrain that range.

This knowledge is important, Tavaré explained, because “[Our work] is going to provide us with a model of how [this form of] colon cancer develops. We need to know how many stem cells there are because these are the cells which, after they sustain a certain critical number of harmful mutations, are likely to lead to cancer.

“What we’re working on next is trying to model things like how long it takes the typical crypt to become mutated enough to produce colon cancer.”

Along the way, they are developing bioinformatic techniques that will progressively solve more and more of the tangled mysteries of bodies, cells, disease, molecules and genes.

Tavaré and Shibata’s stem cell investigations, for example, would have been impossible without the ability to copy the small number of DNA molecules in colon crypts, to rapidly sequence the cells’ DNA and to crunch through intensive computations required to analyze and model the colon crypts’ growth and renewal.