USC President C. L. Max Nikias and former California Gov. Arnold Schwarzenegger have announced the establishment of the USC Schwarzenegger Institute for State and Global Policy, which will be housed in the USC Price School of Public Policy.

The institute will focus on the responsibility of leaders to transcend partisanship to implement policies that most benefit the people they serve, with five priority areas: education; energy and environment; fiscal and economic policy; health and human wellness; and political reform. 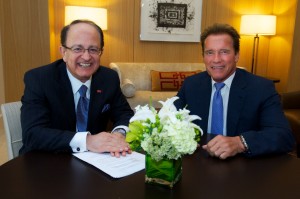 “We are delighted to partner with Gov. Schwarzenegger in establishing this vital institute,” Nikias said. “The University of Southern California is committed to promoting civic engagement both nationally and internationally, and the new Schwarzenegger Institute will advance this mission with the understanding that policy decisions should be evidence-based and best derived through critical analysis and mutual respect for competing well-reasoned positions. This is the only way we can achieve the best possible outcomes for our shared, global future.”

Schwarzenegger added: “One of the great lessons I learned as governor of California was that the best solutions to common problems could only be found when each side was willing to engage thoughtfully and respectfully with each other. This institute is dedicated to promoting a new era of post-partisanship, where solutions are the result of intelligent and civil discussion between people with deeply held principles who understand the need to work through their disagreements to achieve real solutions. Knowing USC’s reputation as one of the nation’s leading policy schools, I could think of no better home for this institute.”

The institute will boast a bipartisan Board of Advisors that includes international leaders in business, public service and education. Initial members include Henry Cisneros, who as San Antonio’s mayor became the first Hispanic-American mayor of a major U.S. city and was appointed by President Bill Clinton as secretary of the U.S. Department of Housing and Urban Development; Vicente Fox, who served as president of Mexico from 2000 to 2006; Rajendra Kumar Pachauri, chair of the Nobel Peace Prize-winning Intergovernmental Panel on Climate Change; George Shultz, economist and statesman who served as U.S. Secretary of State from 1982 to 1989; Austrian Chancellor Werner Faymann; and Kandeh K. Yumkella, director-general of the United Nations Industrial Development Organization.

Schwarzenegger will chair the Board of Advisors and serve as inaugural holder of the Governor Downey Professor of State and Global Policy at USC, named after a former California governor and co-founder of USC.

Among the institute’s guiding principles are:

“We are deeply grateful for Gov. Schwarzenegger’s vision and support for this institute,” said Jack H. Knott, dean of USC Price. “Its guiding principles and focus reflect our school’s mission. The work of the institute will immediately enhance the experience of our students who come to us to learn how to solve real-world problems — and will make a lasting contribution to public policy for generations to come.”

Reiss served as senior adviser to Schwarzenegger from 2003 to 2007, and California Secretary of Education from 2010 to 2011. Prior to those appointments, Reiss was an entertainment law attorney. She has founded three national nonprofit organizations and currently serves on the University of California Board of Regents.

Staudt is an eminent scholar on tax law, tax and budget policy, and empirical legal studies, and is the inaugural holder of the Edward G. Lewis Chair in Law and Public Policy. She holds a joint appointment at the USC Gould School of Law and USC Price, and joined USC in 2011 from Northwestern University.

The institute will be funded by an initial gift from Schwarzenegger, as well as a commitment to raise an endowment with nonprofit and nonpartisan interests.

The institute’s first public event will be a one-day symposium on Sept. 24, to be held on the USC campus. The event will focus on the importance of post-partisanship in the modern policymaking world. Schwarzenegger will also serve as keynote speaker of the 2013 USC Global Conference, to be held May 23-25 in Seoul, South Korea.

For more information, go to www.usc.edu/price/schwarzenegger