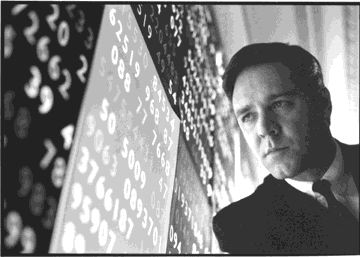 Russell Crowe portrays the brilliant, troubled mathematician John Nash in the film “A Beautiful Mind,” screenplay by Akiva Goldsman adapted from the biography by Sylvia Nasar.

Sylvia Nasar’s book was adapted for the screen by Akiva Goldsman. Nasar and Goldsman will be honored with crystal book awards March 16 at a black-tie dinner in Doheny Memorial Library.

The film “A Beautiful Mind” – inspired by events in the life of brilliant mathematician John Forbes Nash Jr., who suffered for more than three decades from paranoid schizophrenia and eventually won the Nobel Prize in economics – is based in part on Nasar’s 1998 biography of the same name, which was a finalist for a Pulitzer Prize. The film stars Russell Crowe, Ed Harris, Jennifer Connelly and Paul Bettany.

A former New York Times economics reporter, Nasar first learned about Nash a year and a half before Nash won the Nobel Prize. Her article “The Lost Years of the Nobel Laureate” appeared in fall 1994. The newspaper gave Nasar a two-and-a-half-year leave of absence to write the book. She now holds the Knight Chair in Journalism at Columbia University’s Graduate School of Journalism.

Goldsman has written film adaptations of John Grisham’s “A Time to Kill” and “The Client,” the upcoming “The Sum of All Fears” – the latest in the Tom Clancy-penned Jack Ryan series – and “Memoirs of a Geisha,” based on the best-selling novel by Arthur S. Golden. His credits also include “Silent Fall,” “Batman Forever” and “Lost in Space.”

Sponsored by the Friends of the USC Libraries, the Scripter Award is given to the author of the book or story on which an English-language film is based and to the screenwriters who adapted the book for the screen.

The selection committee is composed of screenwriters, authors, film industry executives, USC faculty and members of the Friends of the USC Libraries. The committee narrows the year’s eligible films to five nominees and then chooses that year’s best film adaptation.

Producer Albert S. Ruddy (“The Godfather”) chaired this year’s committee. “‘A Beautiful Mind’ is a riveting film that explores the fine line between madness and genius,” said Ruddy. “But it also is an extraordinary love story and a stirring tale of triumph, loss and redemption. Both the script and the book are unforgettable.”

Past Scripter winners include the authors and screenwriters of “Wonder Boys,” “A Civil Action,” “L.A. Confidential,” “The English Patient,” “Sense and Sensibility,” “The Shawshank Redemption,” “Schindler’s List,” “A River Runs Through It” and “Fried Green Tomatoes.”