The Olympics celebrate the glory of sports, and USC athletes have proudly represented the Trojans well, earning a gold medal at every Summer Games since 1912. Forty Trojans are headed to the 2012 Summer Olympic Games in London this month in hopes of continuing this tradition.

Equally important to the Olympic movement, however, has been the pageantry surrounding the competition. When Los Angeles hosted the games, Trojans played an important part. In fact, the success of the Opening and Closing Ceremonies in 1932 and 1984 was largely due to the work of talented Trojans, especially three USC band directors: Harold Roberts, Tommy Walker and Arthur Bartner.

The 1932 Summer Olympics were held during the height of the Great Depression, and Los Angeles was the only city that bid on the games. The Los Angeles organizing committee helped revolutionize the Olympics that year by building an Olympic Village in Baldwin Hills to house and feed the male athletes (women were housed in a hotel on Wilshire Boulevard), offsetting the costs for cash-strapped delegations. This idea was the brainchild of a Trojan, Gwynn Wilson, who held the post of associate manager of the Olympics after managing USC Athletics from 1920 to 1930.

The director of the Trojan Band in 1932 was Roberts, who had held the post for 10 years after earning his undergraduate degree at USC. He had modernized the ensemble by incorporating jazz into the band’s repertoire and organizing elaborate on-field stunts at halftime. In fact, USC’s current mascot, Traveler, wasn’t the first horse to gallop across the Los Angeles Memorial Coliseum. One of Roberts’ stunts featured a Shetland pony pulling a chariot that held a 6-foot bass drum. Roberts’ band not only appeared in the movies, but it was one of the first to regularly perform on national radio broadcasts.

By 1928, the band was the largest collection of collegiate musicians west of the Mississippi. It was no surprise, then, that Roberts was chosen as the director of music and organizer of the Parade of Nations for the 1932 Olympics. It was a formidable undertaking. The 10th Olympic Band comprised a drum and bugle corps of 1,500 and a chorus of 1,200 vocalists. Each state in the union was represented in the band’s ranks.

The set list for the Opening Ceremony on July 30, 1932 featured “I Love You California,” “The Star Spangled Banner” and a few de rigueur John Philip Sousa marches, “Semper Fidelis,” “The Thunderer” and “El Capitan.” More than 105,000 spectators crowded the Coliseum — temporarily called the Olympic Stadium — to witness the extravaganza.

The band and chorus were a hit. The Los Angeles Times raved: “Spectacles may come and go, but it is doubtful if there will ever be another such as yesterday’s — certainly never in the lifetime of most of those who witnessed the mammoth pageant of color and music.”

Offshoots of the 10th Olympic Band continued to play throughout the games. A 100-piece group performed every day at the Coliseum, and smaller ensembles were assigned to other venues, including the Olympic Auditorium, Rose Bowl, Long Beach Marine Stadium and Riviera Country Club Stadium. In total, Roberts’ groups had 135 engagements. Band members had to learn more than 50 national anthems to perform at the medal ceremonies, which was a first for Los Angeles. Before that time, all athletes received their medals at the Closing Ceremony.

After the Olympics, Roberts directed the USC band until 1937 when he went into private business. Four years later, a freshman named Tommy Walker enrolled at USC already holding the title of national champion drum major, an honor he won as a senior in high school.

Despite having his schooling interrupted by service in World War II — earning a Purple Heart and Bronze Star — Walker designed the band’s field shows, composed the trumpet call “Charge” and famously kicked field goals for the USC football team, wearing pads under his drum major uniform.

Walker became director of the band in 1952. He held the post until 1955 when Walt Disney saw the band’s performance at the Rose Bowl and hired him as the first entertainment director at Disneyland. Walker would go on to organize numerous events for Disney, including the 1960 Opening Ceremony of the Squaw Valley Winter Olympics. In 1966, he left Disney to form his own production company which produced extravaganzas for presidential inaugurations, Super Bowls and the 1980 Winter Olympics in Lake Placid, N.Y.

In 1970, Bartner became director of the band. By the early 1980s, he turned it into one of the premier college bands in the country. Outside of USC, he directed a large group called the All-American College Marching Band for the 1982 opening of the EPCOT Center theme park in Orlando, Fla. Behind the development of the group was Robert Jani ’56, who had replaced Walker as director of entertainment at Disneyland in 1967. Jani had his own legacy at USC: He introduced Traveler to the Coliseum in 1961 as USC’s director of special events. 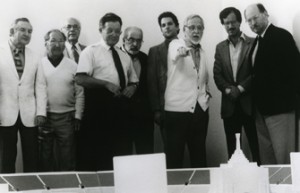 David Wolper points out Opening Ceremony locations in a model of the Coliseum to Arthur Bartner, second from right, and Tommy Walker, sixth from right. (Photo/USC Trojan Marching Band Archives)

Working for the Walt Disney Co., Jani developed a concept for the 1984 Olympic ceremonies. He assigned Bartner to bring a bigger, better All-American Marching Band to the Coliseum. However, less than a year before the Opening Ceremony, the Los Angeles Olympic Organizing Committee replaced the Disney Co. with David Wolper, a veteran Hollywood producer and Trojan alumnus who brought in Walker to direct the event. The two men kept the Olympic All-American Marching Band in the show.

The unifying theme of the Opening Ceremony was the “Music of America.” Fittingly, the All-American Marching Band — like Roberts’ band 52 years earlier — was composed of young musicians from all 50 states. The heart of the 826-strong group was 130 members of the USC Trojan Marching Band, many of whom served as student leaders. The entire group practiced every day from July 15 to July 28, the date of the Opening Ceremony.

Musicians in the 1984 Olympic band had more songs to memorize than their 1932 predecessors, including the five-minute “Americana Suite” medley of patriotic songs that featured “The Battle Hymn of the Republic,” “You’re a Grand Old Flag,” “This Land Is Your Land” and a Sousa march, “Washington Post.” And that was just the opening; the band continued to perform throughout the entire musical segment of the ceremony.

“It was a 20-minute show, including a gospel number with Etta James, and a hoedown with Aaron Copland’s music. There was ‘Sing, Sing Sing’ and a finale with ‘America the Beautiful,’ ” recalled Bartner, now in his 43rd year as director of the band. “There were these different segments with the whole cast. For ‘America the Beautiful,’ we had the whole cast form [a map of] America on the field.”

Keeping the most complex Opening Ceremony in Olympics history together was Walker. Literally directing a cast of thousands, Walker coordinated the movements of 400 swing, western and “jazzercise” dancers; 84 grand pianos and pianists; a 1,100-voice choir; 4,000 homing pigeons; 1,200 giant balloons used to spell “Welcome” and a jet pack-propelled Rocketman.

In one of the most memorable moments of the Opening Ceremony, Rafer Johnson — the gold medal-winning decathlete and UCLA alumnus — lit the Coliseum’s Olympic torch. Immediately afterward, the orchestra cued up a lively rendition of the USC victory anthem “Conquest!” for the parade of the national flags. With that many Trojans running the show, it was perhaps inevitable.

After the Opening Ceremony, the Olympic All-American Marching Band was split between its local and out-of-state students. As in 1932, small ensembles of local band members played at various venues around Los Angeles, including the Forum, the Sports Arena and the USC campus. Bartner and the out-of-state group went on a concert tour of Southern California, visiting Disneyland and Sea World, among other venues.

The out-of-state group reappeared at the Closing Ceremony, performing “March of the Olympians” — co-composed by Walker for the 1960 Olympics — as it marched down the Coliseum’s peristyle. Once again directing the show, Walker oversaw a giant UFO that hovered over the Coliseum and a 25-minute fireworks salute to the previous 22 Summer Olympics.

Like the 1932 games, the 1984 Summer Olympics are now widely considered one of the most successful Olympiads ever staged, thanks in large part to the outsized spectacle of the ceremonies that bookended the event.

As London prepares for its third Olympiad, Los Angeles can look forward to the next time the world’s greatest athletes descend upon Southern California. Whenever that may be, one can wager that Trojans will be prepared to welcome them in style.

From the forge to the field: The story (and the person) behind the Trojan sword and armor

The pieces are as iconic as Traveler, the Trojan Marching Band and the football program itself. But where the armament is crafted couldn’t be any farther from the bright lights and boisterous crowd of the Coliseum.

The new degree is designed for musicians wanting to transition into teaching as well as current K-12 teachers who want to immerse themselves in popular music pedagogy.