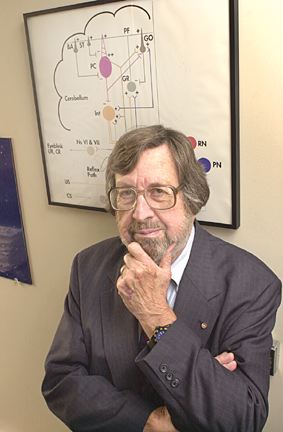 Richard F. Thompson is senior author of the new study showing how two different kinds of memory trace are stored in the cerebellum. The diagram in the background shows the neural circuit for the learning of Pavlovian conditioned responses and identifies the locations of the memory traces themselves.

A hundred years after Ivan Pavlov got the Nobel Prize, psychology professor Richard F. Thompson has tracked the memory traces that underlie Pavlovian conditioning to a tiny, specific part of the brain.

Surely, Pavlov would be proud.

Thompson’s study will be published in the Feb. 5 issue of the Proceedings of the National Academy of Sciences.

In his landmark experiments with dogs in the late 1800s, Pavlov characterized the behavioral details of a simple, reflexive form of learning now called classical conditioning, a.k.a. Pavlovian conditioning. Most famously: A dog that repeatedly hears a bell before it gets fed will start salivating every time it hears the bell, food or no. In identifying and charting out this process, Pavlov helped launch in earnest the modern science of neuropsychology.

But the proverbial last chapter in Pavlov’s book couldn’t begin to be written until someone could identify the specific brain areas involved and describe the neural mechanisms at work.

That someone turned out to be Thompson, holder of the William M. Keck Chair in Biological Sciences and Psychology in the USC College of Letters, Arts and Sciences, and senior author of the new study. Since the early 1980s, Thompson has built his career primarily around explaining Pavlov’s famous conditioning in modern neuroscientific terms.

“What Thompson and his colleagues did [originally],” said Larry Swanson, Milo Don and Lucille Appleman Professor and director of USC’s NIBS-Neuroscience Program, “was to establish, at a systems level, the basic circuitry for this learning behavior.

“It was a classic problem, the search for the engram – the search for where the memories are, how they’re laid down and how they’re retrieved,” said Swanson. “This was something that people had been looking for ever since Pavlov characterized the behavior. And for this particular type of learning, Thompson’s group showed that the cerebellum was the critical part.”

Neuroscientists were rather surprised to learn that the cerebellum, a dense ball of nerve cells at the bottom-rear of the brain, might play a role in learning and cognition. It had previously been thought of solely as a motor region, an orchestrator of voluntary, coordinated body movements.

“I don’t think anyone suspected [the cerebellum] would have anything to do with classical conditioning,” said Swanson. “This was a real revelation. And still there are a lot of people who find it hard to accept: It goes against classical thinking. But Thompson proved it beyond a doubt. He should have won the Nobel prize for that work.”

For example, if a rabbit repeatedly hears a tone that’s followed by an unpleasant puff of air blown into its eye, the conditioned response it develops is to blink automatically every time it hears the tone. Moreover, it learns to blink with perfect timing to deflect the anticipated air-puff. This “eyeblink conditioning” is the experimental paradigm Thompson has used most frequently in his investigations.

“What we show in this new paper,” Thompson said, “is that there appear to be two different kinds of memory trace stored in the cerebellum.”

According to Thompson, the “primary memory trace” – what causes the animal’s basic impulse to blink after the tone – resides in a tiny cerebellar structure called the interpositus nucleus. But a “secondary memory trace” is projected into the interpositus from the cerebellar cortex – the much larger, outerly visible portion of the cerebellum. The secondary trace imposes exact timing and other fine-tuning to the primary trace, Thompson said.

Thompson’s team reasoned this out by injecting the interpositus nuclei of trained rabbits with a well-chosen combination of two drugs, called muscimol and picrotoxin. These drugs both interfere in different ways with the neurotransmitter called GABA, which the cortex uses to exert its influence over the interpositus.

The drugs’ combined effect was equivalent to cleanly severing the cortex’s projections to the interpositus – an operation that would be next to impossible to do surgically, Thompson said, because of the fine-grained wiring involved. “Either of these drugs alone knocks out the conditioned response in trained animals,” said Thompson. “But if the muscimol is first, and the picrotoxin second, we get the eyeblink response back. What they do is completely eliminate the cortex from the situation – yet we still get the conditioned response. Which means it’s in the interpositus nucleus.”

Yet without the secondary memory trace to fine-tune it, Thompson said, the timing of the conditioned response is thrown off. The rabbit still blinks, but not in sync with the air-puff’s precisely timed release following the tone.

“When we began working with conditioned responses [back in the early 1980s], we had no idea we’d end up in the cerebellum,” Thompson said. “What has been really difficult since then was to determine the relative contribution of the cerebellar cortex and the interpositus nucleus to the formation of memory. And it seems we’ve finally answered that.”

Findings That Would Make Pavlov Proud