Led by Steve Kay, incoming dean of the USC Dornsife College of Letters, Arts and Sciences, biologists at the University of California, San Diego (UCSD), have discovered a chemical that offers a completely new and promising direction for the development of drugs to treat metabolic disorders such as Type 2 diabetes — a major public health concern in the United States due to the current obesity epidemic.

Their discovery, detailed in a paper to be published on July 13 in an advance online issue of the journal Science, initially came as a surprise because the chemical they isolated does not directly control glucose production in the liver but instead affects the activity of a key protein that regulates the internal mechanisms of daily night and day activities, which scientists call the circadian rhythm or biological clock.

Scientists had long suspected that diabetes and obesity could be linked to problems in the biological clock. Laboratory mice with altered biological clocks, for example, often become obese and develop diabetes. Two years ago, a team headed by Kay, currently dean of the Division of Biological Sciences at UCSD, discovered the first biochemical link between the biological clock and diabetes. The team found that cryptochrome, a key protein that regulates the biological clocks of plants, insects and mammals, also regulates glucose production in the liver and that altering the levels of this protein could improve the health of diabetic mice.

Now Kay and his team have discovered a small molecule — one that can be easily developed into a drug — that controls the intricate molecular cogs or timekeeping mechanisms of cryptochrome in such a manner that it can repress the production of glucose by the liver. Like mice and other animals, humans have evolved biochemical mechanisms to keep a steady supply of glucose flowing to the brain at night when they’re not eating or otherwise active.

“At the end of the night, our hormones signal that we’re in a fasting state,” Kay said. “And during the day, when we’re active, our biological clock shuts down those fasting signals that tell our liver to make more glucose because that’s when we’re eating.”

Diabetes is caused by an accumulation of glucose in the blood, which can lead to heart disease, strokes, kidney failure and blindness. In Type 1 diabetes, destruction of insulin-producing cells in the pancreas results in the high blood sugar. In Type 2 diabetes, which makes up 90 percent of the cases, gradual resistance to insulin because of obesity or other problems leads to high blood sugar.

Kay and his collaborators discovered in 2010 that cryptochrome plays a critical role in regulating the internal timing of cyclical eating patterns, timing the fasting at night with eating during the day to maintain a steady supply of glucose in our bloodstream. Other researchers have recently discovered that cryptochrome also has the potential to reduce high blood sugar from asthma medication by adjusting the time of day a patient takes medication.

“We found that if we increased cryptochrome levels genetically in the liver, we could inhibit the production of glucose by the liver,” Kay said.

What he and his team found in the most recent discovery was that a much smaller molecule, dubbed KL001 for the first such compound from the Kay Lab, can regulate that activity as well. The molecule slowed down the biological clock by stabilizing the cryptochrome protein — that is, it essentially prevented crypotochrome from being sent to the cellular garbage can, the proteasomes.

The discovery of KL001 was serendipitous, a complete surprise to the scientists that came about from a parallel effort in Kay’s laboratory to identify molecules that lengthen the biological clock. Two years ago, Tsuyoshi Hirota, a postdoctoral fellow in Kay’s laboratory, found a compound that had the greatest effect ever seen on circadian rhythm — a chemical the biologists called longdaysin because it lengthened the daily biological clocks of human cells by more than 10 hours.

Continuing his search, Hirota resumed his efforts to find more chemicals that lengthened or slowed down circadian rhythms, enabling the scientists to understand more about the intricate chemical and genetic machinery of the biological clock. He and his colleagues in Kay’s lab did this by screening thousands of compounds from a chemical library with human cells in individual micro-titer wells in which a luciferase gene from fireflies is attached to the biological clock machinery, enabling the scientists to detect a glow whenever the biological clock is activated. Their molecular fishing expedition came up with a number of other compounds, one of which was KL001. 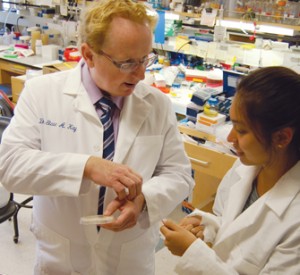 Steve Kay, incoming dean of USC Dornsife, is one of the world’s top experts on genes and circadian rhythms. (Photo/Emily Cavalcanti)

“We found other compounds that like longdaysin slowed down the biological clock,” Kay said. “But unlike longdaysin, these compounds did not inhibit the protein kinases that longdaysin inhibits so we knew this compound must be working differently. What we needed to know was what is this compound interacting with? And we were absolutely stunned when we discovered that what was binding most specifically to our compound, KL001, was the clock protein cryptochrome that our lab has worked on in plants, flies and mammals for the last 20 years.”

Kay’s team turned to biological chemists in Peter Schultz’s laboratory at The Scripps Research Institute to characterize the compound and understand better chemically how it affected cryptochrome to lengthen the biological clock.

“Those biochemical studies showed us that KL001 prevents cryptochrome from being degraded by the proteasome system, which was another big surprise,” Kay said. “It essentially interferes with the signal to send cryptochrome to the garbage can.”

To understand how KL001 worked mechanistically with cryptochrome to control the biological clock, the team initiated a collaboration with Frank Doyle and his group at UCSB. “They constructed a beautiful mathematical model of cryptochrome’s role in the clock,” Kay said. “That model was essential in allowing us to understand the action of the compound because the biological clock is very complicated. It’s like opening the back of a Rolex and seeing the hundreds of tiny little cogs that are tightly integrated.”

Based on that mathematical model, the scientists predicted that adding KL001 to mouse liver cells should stabilize cryptochrome and that the increased level of cryptochrome would inhibit the production of enzymes in the liver that stimulate the process of gluconeogenesis — the generation of glucose during fasting. Experiments done together with the laboratory of David Brenner, dean of the UCSD School of Medicine and vice chancellor for health sciences, confirmed that prediction to be true.

“In mouse liver cells,” Kay said, “we showed that KL001 inhibited gene expression for gluconeogenesis that is induced when exposed to the hormone glucagon, which promotes glucose production by the liver.  It’s a hormone we all produce in fasting states. And our compound, in a dose-dependent way, inhibits hepatic gluconeogenesis, the actual production of glucose by those liver cells.”

Kay, who will begin his tenure as dean of USC Dornsife on Oct. 1, said the next step for the research group is to understand how KL001 and similar molecules that affect cryptochrome function in living systems.

“We see applications of compounds that target cryptochrome, not only in diabetes, but in other diseases such as asthma,” Kay said. The scientists plan to probe how such compounds affect other processes besides the liver that may tie the biological clock further to metabolic diseases. “As with any surprise discovery,” he noted, “this opens the door to more opportunities for novel therapeutics than we can currently imagine.”

Besides Kay, Hirota, Schultz, Doyle and Brenner, other scientists involved in the discovery were Mariko Sawa, Pagkapol Pongsawakul and Tim Sonntag of UCSD’s Division of Biological Sciences; Jae Wook Lee of The Scripps Research Institute; Peter St. John of the University of California, Santa Barbara; and Keiko Iwaisako, Takako Noguchi and David Welsh of the UCSD School of Medicine.

USC scientists unlock the evolutionary history of the pituitary gland

New research into the key gland’s development shatters a scientific hypothesis that had been held for decades.

COVID-19 has dealt a serious blow to the U.S. economy

USC researchers have found that, by both sickening the workforce and changing people’s behavior, the coronavirus has been an economic disaster beyond even the Great Recession.