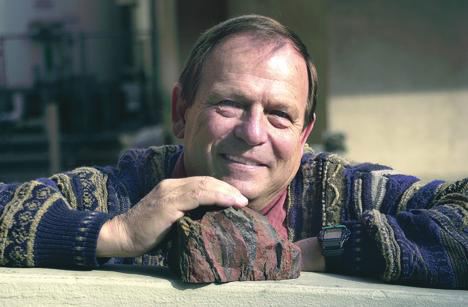 Geobiologist Kenneth Nealson with a 2.4 billion-year-old rock from western Australia. Many of the clues to life on Earth can be found in such rocks, he said.

Late last year, microbiologist-cum-astrobiologist Kenneth Nealson left his position as head and founder of JPL’s Life Detection Institute. JPL was not pleased to see him go, but the USC College of Letters, Arts and Sciences had made him an offer he couldn’t refuse.

Nealson has come aboard at the College’s earth sciences department to set up the Program in Geobiolgy – an area of science that tackles the still largely unexplored domain where the chemistry of life and the Earth’s mineral-metal chemistry intersect.

Geobiology promises a range of scientific fruits, Nealson said, from new ways to harness microbes to solve engineering problems to better understanding life’s history on Earth and informing NASA scientists of the best assays for seeking signs of life on other worlds.

“We are very excited that Professor Nealson has chosen to join us,” said Joseph Aoun, dean of the College. “To some, reaching into outer space to solve problems here on Earth has always been a dream. Ken Nealson is blazing a trail of discovery that I am confident will do just that.”

Nealson, who holds the Wrigley Chair in Environmental Studies, said the interface between geology and biology has never been properly crossed “and is probably one of the most exciting things going on in science today. A lot of earth scientists are coming to appreciate that many of the things happening on and near the surface of the Earth” – matters traditionally credited to geochemical processes alone – “are in fact being done by microbes.”

In this view, study of the geosphere and study of the biosphere need to be harmonized. It turns out that the distribution and variety of mineral and metal compounds would be quite different today had Earth not been bathed and suffused in life’s transformative, recyclative chemistry for three and a half billion years. It also turns out that many types of microbes use exotic, inorganic elements in surprising ways to make their living – biochemical talents that scientists are starting to realize could be of great utility.

Some applications that geobiology may spawn include control of corrosion, better and faster ways to reduce sewage and other forms of waste, and better control over many types of surface chemistry.

“In the future it may be possible, for example, to make a biofilm that would stop barnacles from attaching to ships,” Nealson said. “Such geobiological approaches might also allow us to stabilize coral reefs [which are disintegrating worldwide]. This could have a major impact not only on the global carbon cycle, but with regard to preservation of the diverse reef ecosystems.”

Another exciting prospect for geobiology is the cleanup of deadly elements like uranium and chromium. Some species of microbe have, remarkably, evolved to breathe these metals, said Nealson, who was among the first scientists to isolate such creatures about 10 years ago.

These strange microbes breathe metal oxides in the water in much the way we animals breathe oxygen. In the process, they “reduce” the metals to new forms that often have different solubilities, Nealson explained. They change the chemistry of the waters and lakebeds where they normally live, respiring solid oxygen and manganese and rendering them soluble. In the case of uranium and chromium, which normally dissolve in water, the microbes turn them in-soluble: Reduced, the metals fall to the bottom of the water like silt, where they may be scooped out.

“This bioremediation of toxic metals is going to be big,” he said, pointing out that the U.S. Department of Energy is burdened with millions of gallons of such waste. “But metal chemistry has always been very mysterious to most microbiologists.

“That’s why one of the first new faculty we hire [for the geobiology program] will be a really good, inorganic, mineral geochemist.”

Nealson is unapologetic in his belief that science needs to grow more interdisciplinary.

“I’ve been offered positions at geology departments before,” he said, “but I always turned them down. Most departments discourage these interdisciplinary attempts. But USC is ahead of the curve in fostering cross-disciplinary research.”

Aoun says that’s by design. “Here in the College, we strongly encourage bringing scientists of different backgrounds and training together and to take their ideas and thinking far outside normal bounds,” he said. “One day Nealson’s ambitious strategies for cross-disciplinary research will be the norm for scientists throughout the world.”

Nealson intends to make the geobiology program interdisciplinary at its core. So while geobiology’s offices will stay in Science Hall, he has intentionally placed the program’s laboratories in the Hancock Building alongside the marine sciences labs.

“I want the geos and the bios to work in the same lab space,” he said. “They get trained to speak different languages, and I want to overcome that. Just saying you’re interdisciplinary isn’t enough; the students have to spend all day talking to each other and having coffee together. … Then in another 10 years there’ll be a generation of geologists and biologists who actually understand each other.”

There are few geobiology groups in the country so far, Nealson said, but he expects other research universities to play catch-up in a few years.

“I think this is probably going to emerge in the next 10 years as one of the most vibrant areas of science.”